What the Drunken Severed Head Drinks

I, the Drunken Severed Head, drinks whatever you're having. Friends at this past week's Horror Realm con  kept offering me vodka. Lots of vodkas. This blasted-looking zombie, raised from the dead by spfx makeup legend Tom Savini, told me to try Clique Vodka. (It's Tom's favorite.) 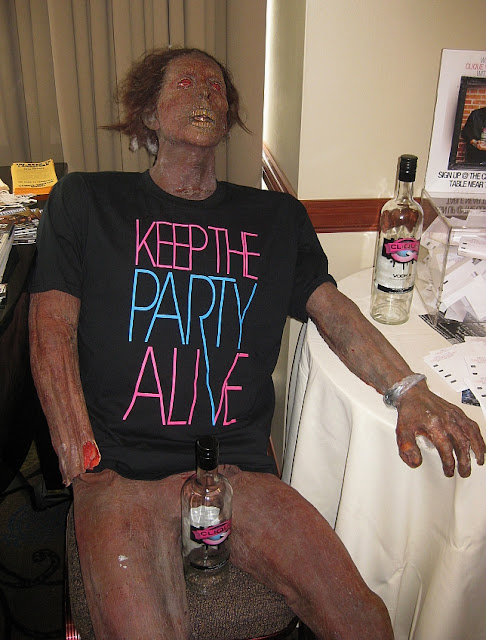 Other friends offered me these: Burnett's Orange Cream Vodka and Crystal Head Vodka, the spirit sold in the best-looking bottle on the market. 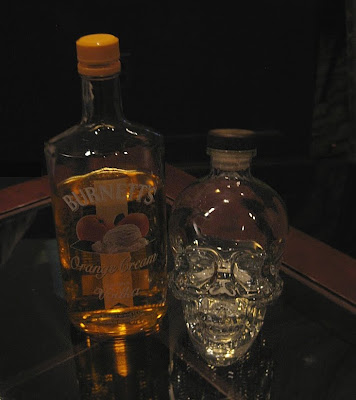 And it's the main ingredient in the favorite drink of the legendary Bloody Mary! You know, the murderous spirit who can be summoned by chanting her name while looking into a mirror in a darkened room? Here's a video showing what she REALLY does when you call her:

And a funny cartoon about the fatigue of the folkloric ghost can be found here.

I found this cartoon by Irving Roir in the 1952 book The Complete Bartender's Joke Book: 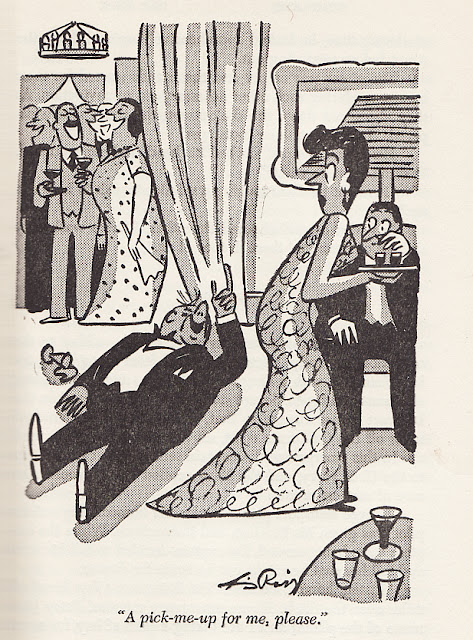 I liked it, but a way to improve it occurred to me. Here's the cartoon as I think it ought to be: 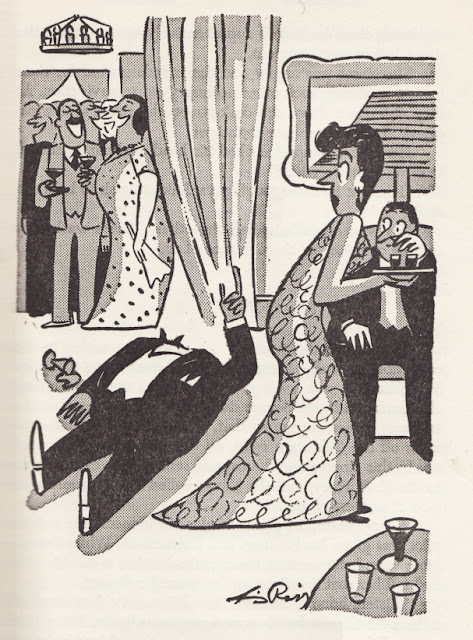 The hostess of the cocktail party is no longer looking in surprise at a prone drunken guest, but at a headless murder victim pointing his left arm in accusation. Is that really a body? Or is he a ghost appearing suddenly on the floor to confront his killers? Or perhaps the shared hallucination of the hostess and the man she is serving? Their faces betray their feverish consciences; no doubt she is the dead man's wife and the guest is her lover.
Yeah, that's gotta be it.
Posted by Max the drunken severed head at 6:03:00 PM 1 comment:

Does no one have taste anymore? Look at the banner found here, and you'll be surprised at what people want.

I got no body for "Killer Bodies"!

Like other bloggers, I get freebie offers to review things: books, comics, films, etc. But never have I gotten an offer like the one from Adam and Eve Pictures. Chris (no other name given) of their PR department wrote to say, "I'm excited to introduce you to "Killer Bodies: The Awakening", an interactive, choose-your-own-adventure thriller on DVD." Thirty-two different possible dramatic outcomes were promised. 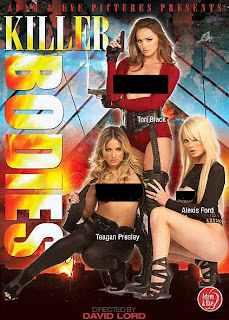 They did, and I watched it....very closely. It made my brain stiff.

That is, the actors play around when they aren't chasing and shooting each other, (it's a thriller, remember) or subjecting the star to a brainwashing experiment not unlike the main plot device in The Manchurian Candidate. ('Cept it ain't as funny. as that classic.)

Performer Raylene evidently was in charge of party decor--here's a publicity photo where she seems to rubbing balloons on her sweater. (Static electricity will make them stick to the wall for an amusing effect.) Well, that's the raciest photo I'll run in this post, so I might as well close, eh?