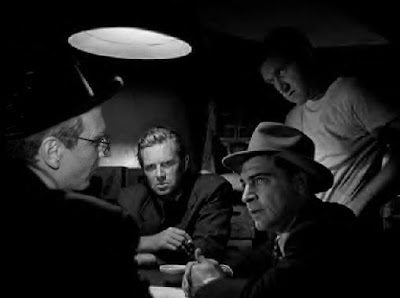 Above: A still from Revik's CONDEMNED, never before shared with the public!

Ted Newsom wrote to me again to tell me about Allen Gordon's death this week. He has some details, being in "da biz", that I have not read about in the news. He again gave me express permission to share his e-mail to me with the readers of this blog. So...

I suppose the cops are right in looking for some old wounded begger swathed in old clothes, but I did a double-take when I read the neighbor’s description of the “alleged intruder.” Sure, I’m monster-obsessed in general, maybe it’s because Kharis was actually in HOUSE OF DR. GHOUL (played by Tom Tyler, no less) and he’s on my mind—but that unnamed neighbor’s description sounded to me like he was describing the Mummy. Think about it: the cops say tall & strong and another guy sees somebody wrapped in “bandages and rags.” And what’s with breaking in and only stealing a prop crossbow? (Jeff said he and Sam saw it in their brief meeting with Gordon that afternoon.) And guess who the cops are looking at as the obvious suspect? Your pal and mine, Sam Lee.

My friend Brian (former NYPD, now out here; we worked back when I did that brief spate as investigator in ‘89) just called me with one of those “Hey, lemme ask you sumthin’" freebie favors. The cops had found a crossbow arrow embedded in the wooden gate by Gordon’s pool; they initially thought Gordon shot wild and missed whomever (or whatever?) was coming at him. Then forensics found microscopic debris on the arrow shaft. Mold (maybe Gordon’s housekeeper wasn’t tidy?)—and something else. Brian asked me what I knew about Fuller’s Earth. I told him (well, we all know this, don’t we?) that it’s a cosmetic ingredient, a fine powder—and that this was the stuff Pierce used to coat Lon Chaney when he played you-know-what. From Brian’s reaction, I don’t think that mummy movie minutia helped Sam Lee one bit. Besides, everybody who ever met Gordon hated him, so there’s a pretty clear field.

I suppose they're thinking the obvious here, that Sam's doing the FADE TO BLACK schtick (or HOW TO MAKE A MONSTER, anyway), playing dress-up to kill people. I won’t believe that, and besides. it's too pat, too cliched. He’s a jerk (and getting jerkier as this goes on) but I don’t think he’s nuts. And the thing is, Sam’s not huge. I’m not sure he’s strong enough to lift a grown man by the throat and crack his head open against a wall like a raw egg.

Over at the film transfer place I got to see more Laszlo Revik clips, but Sam Lee is acting like the most anal-retentive collector I ever knew. Mine-Mine-Mine!

And Sam Lee appears to be getting that worldwide cable & dvd deal. Sheesh.

Hey, you know that sleazepot distributor ["AH"] whose name you keep deleting? [Gotta be careful of the libel statutes, Ted!] The one who got the deal for Sam Lee? He's probably as good a suspect in the Allen Gordon thing as Sam anyway. Him I WOULD believe as a sociopath. Or the Euro-babe, Lorette "Edleman," who tried to get the films from Sam. OK, she's petite, too, but there's something hinky about her. Turns out she doesn't "represent" the Revik estate-- she IS the estate. She's his daughter-- she's actually IN his last film.

Jeff and I screened Revik's nasty cinema verite thing, THE TRIUMPH OF EVIL, and recognized her immediately. It's this disjointed pseudo-documentary with Revik inrroducing a bunch of college kids into the "occult underground world of Paris." Never heard of any of the younger cast, and -- who knows-- maybe Hell swallowed them up afterward. But after all the film's Mondo Cane weirdness, the narrator announces that Laszlo Revik died during production (this is as every bit as tasteful as THE WILD WORLD OF JAYNE MANSFIELD). Then there's actual footage of his funeral pyre. Unless it's the best dummy I've ever seen, it's really Revik's body going up in flames-- and there's a teen version of Lorette reading an exorcism eulogy that hit me like a replay of Gloria Holden in DRACULA'S DAUGHTER.

So, yeah, there's plenty of other people to suspect other than Sam. Hey, on the other hand, maybe it's Revik making a big comeback.

I'm sorry for this lurid turn the posts on all this has taken. But to be able to share little-known film history with rarely-seen poster art is a privilege for the old DSH! And that reminds me-- more Revik posters and a film still have come to light thanks to a certain movie historian who's known for his love of old monster movies and for his big hair. But I don't have his permission to name him! 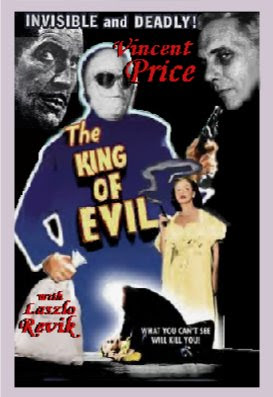