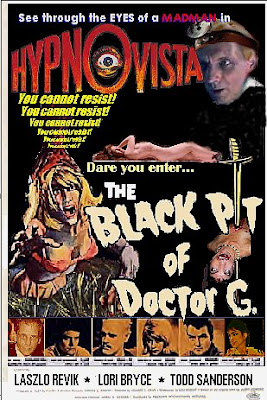 Above: Proposed poster art for Laszlo Revik's THE BLACK PIT OF DR. G.

Last night, I received more rumors and revelations regarding the releasing of reels of Revik's movies (gawd, I love alliteration!) and the strange things going on with getting these lost films distributed. Ted's seen enough to make me feel weirded out about them. But here's Ted's entire letter to me:

The fires have died down, but the other stuff heats up—bubbling to a boil, it seems. I’ve seen some of the posts other people have made, mostly skeptical about this whole Lazslo Revik thing, and you know me—I’m the biggest skeptic this side of the Amazing Randi. Original latex Creature head mask for $30,000? Nonsense, a Don Post pull. Original 1948 Glenn Strange head from A & C MEET FRANKENSTEIN, $15,000? Bull hockey, another Don Post pull. Original Hammer Dracula cape, $50,000? Yeah, we shall see. If somebody came to me with this story, I’d be WAY dubious. But I’ve seen the films—well, clips in some cases, and trailers—and there’s something icky here. Part of it is the subject matter, a really twisted take on all of this, with these reoccurring elements neither I nor Jeff can put together.

(Sam Lee seems oblivious to it all. All he seems to care about is the dough he thinks he’s going to get. His relationship with Eva is falling apart, plus he’s starting to drink again, which doesn’t help. We think he’s had some sort of fling with Lorette, the sultry brunette babe who says (hmmm) she represents the Revik estate and owns the films. Sam’s a dork for cheating-- and it’s pretty clear he is cheating.)

So here’s the jigsaw pieces that we’ve put together so far. There’s a central character in all of these – Revik, usually playing Elwin /Dr. Ghoul, though he’s often incognito— an alchemist of indeterminate age, seeking eternal life. (In ATOM-AGE ZOMBIES he’s creating a world-wide mind-control plan, in the noir CONDEMNED, he’s a gangster planning a complex heist of silver bullion, but the MacGuffins pretty much follow the pattern.) He lets no one stand in his way, and invariably double crosses the people who’ve trusted him. There’s some odd metaphysical theme going on about light and eternal life. A couple of them, particularly DEMONS OF SODOM and THE BLACK PIT OF DR. G. (1962—betcha somebody in Mexico saw that title and liked it), use hypnosis as a gimmick. The pre-credits scene has Revik playing “Moonlight Sonata,” and explaining that the mind cannot differentiate between the “real” and the vividly imaginary. As this oily-voiced European narrates, we see this still photo of clouds. He keeps talking—clearly this guy knew hypnosis—and the screen shows a spiral image, repeated, over and over, as Revik keeps up his mesmeric lilt. Then there’s a hard cut back to the photo of the clouds, and they CHURN. It’s amazing, and unsettling. They roil, they billow, they twist into themselves—and then settle down. But it’s not a special effect, it’s the viewer’s mind being led in the direction the operator wants. I looked at the sequence several times—the second shot of the clouds really IS a still photograph, but by gum, it moved. So much for reality. THIS works in the way the HORRORS OF THE BLACK MUSEUM intro should have done. (Somebody clearly noticed the similarity, because the poster for BLACK PIT seems cobbled together from HORRORS, the way Jack Harris swiped FORBIDDEN PLANET for “Vampire and the Robot” in THE BLOB.)

And there’s a “cult” idea that crops up a couple of times, particularly in the 70s thing FRIGHTMARE FREAK OUT, and his last film, the Mondo Cane type thing, TRIUMPH OF EVIL, which was finished posthumously. He died in Paris in ’75, the film was cut together, scored, ready for release—the usual story--then got vaulted. 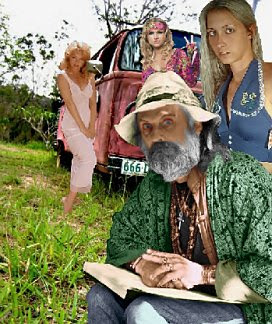 Above: Revik during the shooting of FRIGHTMARE FREAKOUT.

Jeff sneaked me into the telecine place to let me watch some of the stuff (Sam is growing increasingly nervous, understandable when there’s a murder rap hanging over you) and I saw the original trailer for KING OF EVIL, which was made in either ’58 or ’59, with Vincent Price. Revik is a two-faced scientist who tricks Price into allowing himself to be made invisible again—clearly designed as a follow-up to INVISIBLE MAN RETURNS, although the name “Griffin” is never referenced, probably to skirt Universal. That this was made during the William Castle era and just before the Poe films should’ve made it a slam dunk. You’d think Allied Artists or AIP or somebody would’ve sent it out—or that Lucy Chase Williams or Victoria Price would’ve found a reference to it in their books. The invisibility effects are nifty, and there’s a transformation from Joseph Elwin to Dr. Ghoul that’s the best I’ve seen. It doesn’t appear to be a John Fulton style lap-dissolve, or an on-set lighting effect. Creepy, anyway. Jeff scored an old video interview with Price where he actually mentions Revik. He just says, “I had heard about him and looked forward to meeting him. But we didn’t talk much during filming. He was sick.” Indeed. Looks like Price may’ve worked two days and a bunch of voice-over, unless he really did all the effects shots.

At least DR. GHOUL MEETS THE VAMPIRE (1951) has more of the star, which is Lugosi, black cape and all (and Revik/Dr. Ghoul in a pine-green dress suit. Must’ve like the color). It’s Super Cinecolor, like SCARED TO DEATH, and he’s obviously playing Dracula in all but name. At least Dracula (a rose by any other name) is no chump. It’s clear he and Dr. Ghoul have butted heads before, and neither trusts the other any further than they could throw a Buick. As “Dr. Elwin,” Revik makes a deal with the vampire for sanctuary from the police, if in exchange Dracula uses his hypnotic powers on an apprehensive sanitarium patient. “She has delusions I am trying to steal her soul,” coos Revik. And Lugosi smiles, “What an odd hallucination. Something to think about.” Makes you wish he did do a color 3D remake of Dracula.

There’s an uneasy stink at the telecine place, too. Sam’s running a tab transferring all this material, fending them off while his “big cable deal” comes together (The slimeball distributor made sure the fees came from Sam’s end). I helped shoot some video intros were we put Sam “into” the movie with green screen effects. Looks great—you can’t tell the difference between the “real” movie and the “new” movie with a “real” element put into it. Forrest Gump, eat your heart out.

This just in from the Never Rains But It Pours Department: the “big cable deal” may be off. The exec, “Faye,” watched one of the Revik films with her teenage kids and was utterly appalled. She not only doesn’t want the films on her network, she said she’d do everything she could to make sure they’d never be seen anywhere. Whew. (Her preppy assistant still thinks real horror movies with a real black magician (albeit in a green cape) would be a hit with geeks in black T-shirts.) So there’e that.

And Sam’s attorney --working overtime to keep the unlucky dork out of custody-- checked into the status of the movies themselves. There’s not only no record of the “Vienna lawyer” who supposedly called Sam about them, there’s no record of the films being registered for copyright anywhere in the world. The blessed things are in the Public Domain, all 13 of them.

That went over with Sam’s distributor like a steaming dog log. Now they’re on the outs, big time. It means the moment these things hit the airwaves or are on the dvd racks, they belong to the world, and there’s nothing the distributor can do to stop it. The only chance to salvage this is to dump everything quickly, mass produce dvds fast enough and cheap enough to flood the market simultaneously with broadcasting them. And that’s assuming ANY cable company will deal with them. As if that wasn’t enough (and, boy, Sam’s earned all this bad karma), Jeff tells me some priest offered an unspecified wad of dough to Sam for the films. Sam turned the offer down, of course (the priest would probably have an easier time with ["AH"], the distributor), asking why the Church wanted to go into the video market. They don’t. They want them to be permanently “lost.” Turns out Lorette had dropped a dime on the Revik affair. I’m getting this third-hand from Jeff, but: Sam confronted her at her hotel, the lies about owning the films, not saying she was Revik’s daughter, the tip-off to the Church. She shined him on and said she was leaving the country. Right in the middle of their spat, the TV had that little Entertainment Tonight blurb about the Revik movies with clips, including a shot of Lugosi as Dracula, walking toward camera and saying, “Lorette, Lorette, I’ll make a bet: the Man in Green will get you yet.” And she just freaked! Screamed at Sam, ordered him out and locked the door.

PS: Jeff just called. It’s a low-priority news item, all things considered, but it’s one more bit of weirdness. The executive, “Faye,” who put the kibosh on the cable deal—attacked and ravished while jogging. Really horrible. They’re assuming it was an animal from nearby Griffith Park Zoo. The cops aren’t saying squat. I’ll let you know more if I hear about it. This is awfully damned convenient—for Sam.
Posted by Max the drunken severed head at 12:10:00 PM

You remind me of another agile athlete of acerbic alliteration: Dr. Smith from "Lost in Space."

By jove, I believe that's Don Knotts in a blonde wig and falsies in the "Black Pit of Dr. G" poster!

I believe you're right! Another bit of arcane film trivia brought to light!