Hallowe'en is all about trick-or-treating and the friends you share the holiday with.

This is my friend Jim Bertges: 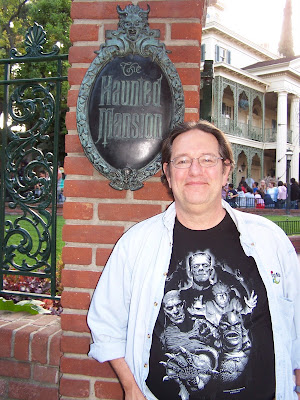 Jim loves monsters. He brings 'em to life. A top-notch model builder, he specializes in creating creatures of the fantastic. See his handiwork here.

Jim's written articles and built models for Modeler's Resource Magazine for 10 years. If you pick up any issue of MR after #7 or so, it's most likely that he's got something in there.

He's also written for Kitbuilders in the past and starting with the next issue, due out sometime in October, he'll be back building, gluing and painting in their pages.

Jim's also been in the "movie business" for more than 30 years and if you visit this site , you'll learn about the schlock film Demonwarp, a film he co-wrote. You can read about some of his exploits as a self-described "very low level, un-glamorous minion in show biz" at the site. As Jim says about this silly chilly-dilly, "We set out to make a crappy movie, and we did!" Demonwarp is good, goofy fun.

Jim, like yours grue-ly, keeps Hallowe'en is his little black heart all year 'round. So when chatting with him on the phone the other day, he could easily recall his childhood experiences on Hallowe'ens of long ago. He shared this "robot reminiscence" with me.

"A long time ago in a very cold and dark place (1958, Fairbanks, Alaska to be precise), it was getting toward Halloween time and my father, who was pretty creative, and good at building things, decided that I should be a robot for Halloween that year. He proceeded to collect an array of cardboard boxes and began cutting them and shaping them into the shape of a blocky 1950s style robot, albeit a junior sized one since I was all of 7 years old. The boxes were fitted to my legs and arms and the largest piece, the torso and head assembly fit over my head so no part of me could be seen. And to be honest, I couldn’t see much of anything out of the two eye ports either. With everything shaped and fitted, the finishing touch was to cover the entire outer surface of the robot body with foil. Back then we called it 'tin' foil and it may well have been made from tin, who knows. The final result was a gleaming silver, blocky, short robot, ready for Trick or Treat.

"At school, we were encouraged to wear our costumes on Halloween. This particular year the school decided not to organize the school wide costume parade they’d staged in past years and all costumed students were confined to their own classrooms. All except one. My teacher and several other teachers were so taken with my robot outfit that one of the teachers led me around the school, from room to room to display my Dad’s handiwork. It made me feel pretty special.

"That evening I was eager to get out and start collecting my candy. In Alaska at that time of year it gets dark pretty early, like around noon, so we had lots of dark time to go door to door. My father was out that evening so my mom helped me get ready and once I was covered head to toe in cardboard and foil, I grabbed my pillow case (standard trick or treat equipment in my family) and headed out. One thing you need to know about Fairbanks in 1958 in the area where I lived, the streets weren’t paved and we didn’t have sidewalks. Come October the dirt streets were frozen solid and the frozen yards just sloped down to the street’s edge and that was it. Well, I set out alone in my robotic finery and when I came to the first street I had to cross, my foil-covered feet slid out from under me and I landed hard on my can. I got up as best I could (it must have taken at least five minutes to get to my feet) and I waddled home crying, thinking I ruined the robot suit and my father would be mad. When I got back home, my mom helped me out of the robot legs got my boots on me and sent me back out into the frozen Halloween night as half a robot. At least I was the top half, that’s the best part to be.

"I wish I had some photographic record of that long ago Halloween, but unfortunately no pictures were taken. I have my memories, though and I’m glad to be able to share them."

Since Jim had no photo to share, you can look at homemade robot costumes here, here, here, and here.
Posted by Max the drunken severed head at 10:34:00 AM