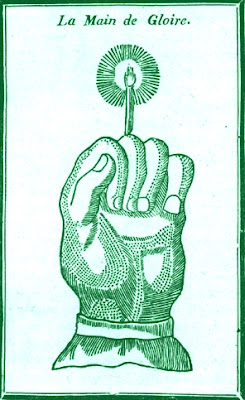 The DSH has been unable to keep to his daily Halloween posting schedule because he has a bad head cold. And when all you are is a severed head, and you get a head cold, oy! Is it a doozy!

Oh well. Good excuse to drink hot toddies. But I can't taste anything. Can't taste the orange juice in my Screwdriver. For all I can tell, it could be a Phillip's Screwdriver-- you know, Milk of Magnesia and vodka.

Back to the topic at hand. And speaking of hands, (oooo, how's THAT for a segue?) , when I was a kid, the magazines CREEPY and EERIE kept the spirit of Hallowe'en burning in me all year 'round. In one of them, I was introduced to the legendary device of dark magic, the hand o' glory.

The hand o' glory was a murderer's severed hand used as a candle, and was alleged to be used by thieves and killers, as it had the power to keep asleep any one inside a home that the user trespassed into. In the magazine story I read as a yoot, a criminal using a hand o' glory intends to steal from a family who have moved into a desolate mansion. But he finds to his surprise that they aren't kept asleep, because they do not live-- they're all vampires, and the criminal becomes their victim!

Jane the Voodoo Queen just picked up a 1961 book titled A Treasury Of Witchcraft. In its entry for "Hand of Glory" is this bit of verse:

Wherever that terrible light shall burn,
Vainly the sleeper may toss and turn;
His leaden eyes shall he ne'er unclose
So long as that magical taper glows;
Life and treasure shall he command
Who knoweth the charm of the glorious Hand!

So you can imagine my surprise to see a hand o' glory at my local Walgreen's drug store! 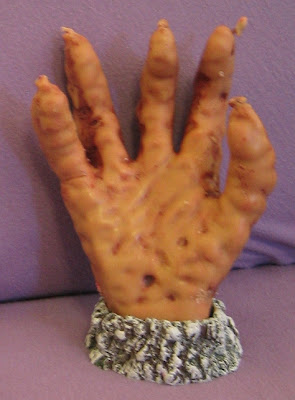 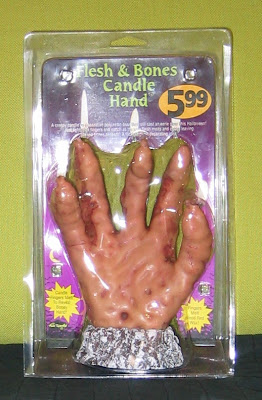 When burning, these candles drip blood-red wax. What a cool touch.
Posted by Max the drunken severed head at 10:44:00 PM

Gesundheit! Whoa...when you're a drunken severed head one good sneeze sends you FLYING, huh? So: Here's my thinking. A disembodied hand o' glory is precisely what a drunken severed head needs to blow his nose for him (s'long as it doesn't light your schnozz on fire). Good timing on this find! (And: WOW! Maybe my Walgreen's has one, too.) Hope you feel much better soon, and thanks so much for linking to me! :-)

Ah man. I remember when I was about 13 I found a book on witchcraft in the local library and it had an entry on the Hand of Glory and how to create one. Where to get a murderer's severed hand I had wondered.

That is one neat candle.

Those are great! I hope they have them for sale at my local Wal-Mart!