Hello, head readers! My apologies that yesterday I was unable to post a Hallowe'en-related entry, but boy, am I making up for it! Or rather, someone else is. That someone is Ted Newsom, a filmmaker who has recently been saluted at the The Documentary Channel website. (Right: Ted in part of the costume of the title character The Naked Monster, a recent micro-budgeted-- but star-studded-- spoof of 1950s monster movies.) 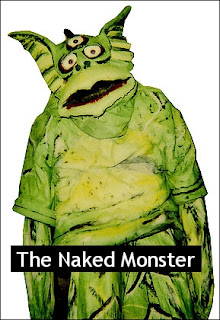 Newsom's 1996 documentary 100 Years of Horror has been released in its original length on dvd, and the DSH recommends it.

When I asked recently about his Hallowe'en memories, Ted shared this reminiscence with me:

"It was the best holiday on the calendar, I think. Halloween, of course. I’m glad I caught it when I did.

"Funny. After I grew up, it seemed to go away, or at least, the Halloween I knew when I was a kid went away and something else took its place. My sisters and I (and a little brother) grew up in the Pacific Northwest, which has seasons, unlike California, my home for the last 30 years. That added so much to the effect. The brown and gold leaves swirling in the October wind, crunching under foot as the sun went down and you went door to door for goodies. There was a huge oak tree in the front yard of our next-door neighbor, classic and straight out of an old RKO Val Lewton film, with a thick trunk so wide you couldn’t put your arms around it, tall and naked spindles of branches reaching up into the sky, barely revealed by the yellow light of the street lamp.

"I’m guessing ours was the perfect era for growing up with Halloween. Sure, it was commercialized, with the packaged Ben Cooper costumes and plastic masks, the generic skeletons and witches, and the semi-okay-looking Frankensteins and Wolfmans. Those “fire-retardant” overalls always drove me nuts. If you REALLY wanted to look like Dracula, why would you wear a one-piece black pajama with a scowling, glow in the dark cartoon on the chest? It just wasn’t dignified.

"The year we lived in Spokane, I remember going to a store on Halloween night with my dad to buy a last-minute costume for my little brother Tommy. He was six, maybe seven, and I wanted him to get the spiffy Superman costume, with the insignia on it and everything. This wasn’t necessarily because my brother was a huge Superman fan. I wanted the thing. It was something I’d wanted since I first saw it in a Sears catalog when I was Tommy’s age. Dad countered that a Ben Cooper devil costume would look good. That, and it was about three dollars cheaper. I whined, “But I know he’d really like it!” My dad got testy and said, “I don’t have enough money!” Well, Tommy was delighted with the devil costume, and I never got my “S” suit. That’s okay. It didn’t really look like a Superman 'S' anyway.

"That year I went all out to try to win some silly costume contest. Cardboard boxes and paint and some wires, and there I was, imagining myself identical to the robot in BOWERY BOYS MEET THE MONSTERS, or Mr. McTavish in SUPERMAN, if you prefer. It was impossible to see properly, the blue-painted cardboard undoubtedly looked ridiculous, and I remember walking blocks and blocks and blocks to get to the “Spook House” where the contest was held. I remember little about it except 1) I didn’t win, 2) I left the suit there rather than stumble home 2 miles in the dark, and 3) one of the “horror” gimmicks in the spook house tour was plunging your little hand into a bowl of brains and veins. OK, it was cold, cooked spaghetti. Still, a lot of silly fun.

"Big brown paper bags with candy, then more candy, then even MORE candy as you made the rounds. Some nice compliments sometimes, but what you really wanted was the sweet loot. Clutches of four or five other kids led around by their parents through the night, standing in the warm glow of a front-door bulb.

"Nobody played 'tricks,' because the fix was in. The suckers gave willingly, like people using a short form 10-40 and filing themselves. I didn’t appreciate the home-made stuff; rather like the insane mother in SYBIL, it had to be store-bought or it just wasn’t good. How much time those oven-baked cookies or caramel-dipped apples probably took to make—and how little I appreciated it at the time. The big Hershey Bars and Mars Bars and Abba-Zabbas were preferable to those damnable little mini-bars. You’d have to eat four or five of those to get the real effect. Boy, did sack lunches seem better in the week afterward with a couple of Trick or Treat goodies tossed in. It would dribble away, until the top half of the brown paper bag would crumple from use, and we’d be down to the individual wrapped taffy globs and walnuts. Long before Thanksgiving, the stocks would be depleted to nothing and the blood-sugar levels back to normal.

"Teenage years took some of the magic off. Just once I joined in on what was supposed to be big time Halloween mischief. We actually got a paper bag and filled it with… you know. And we actually put it on a guy’s porch and lit it on fire. And we actually rang the bell and ran, and watched what would happen. Man, this is gonna be great! But the guy came out, saw the flaming bag of dog poop, and just shook his head. He got some water and dowsed the fire. Darn. Wanna do it again? Nah.

"Three years in the Army in Germany distanced me even more from autumn dress-up. Halloween was a semi-excuse to party, as if we needed one. For several years it seemed to me trick-or-treaters were a lost species. 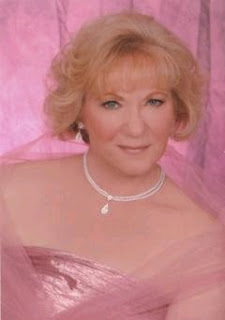 "But I got married on Halloween, 1978. That was intentional, and special. Her name was Marsha. We knew each other from high school and had written for ten years. She was a witch, and so was I. What better day to marry? We had a small reception, but the evening was spend cuddling—and watching Louis Jourdan, John Carradine and Christopher Lee into the night. Halloween became something else to me, and though that personal side was memorable, it was now a spiritual and romantic anniversary instead of the spooky dress-up time it used to be. Only once, that first October 31st after our wedding, did we attend parties. It was Marsha’s wedding anniversary, and hobgoblin hobnobbing with drunken strangers did not appeal to her one bit. On the way back to our car, she got hit in the head with a raw egg. That put the kibosh on any Halloween parties from then on.

"Eight years of marriage was followed by far more years of living alone, and I saw very few kids on that yearly candy-hunt. Maybe it was that I lived in apartments, mostly; maybe that’s the way it is in California. I’m sure much of it was due to the urban myth nonsense about razor blades in candy apples. Come on, when was the last time anybody even SAW a razor blade? Bic and Gillette have been making disposables for 20 years!

"Then last year I moved to the suburbs, an area of single-family homes and nice streets and well-lit sidewalks. My dad bought pounds and pounds of mini-candies from Costco, like he knew something I didn’t. And the kids showed up. Three at a time, 'Trick or Treat!' 'Ah, here’s some for you, and you, and you.' Five at a time. 'Trick or treat!' 'Well, look at that! A princess! A monster! Whoa! Here’s some for you, and you—oh, and some for you, too.' A half-dozen at a time, with a smiling parent standing in the shadows. Treats for everybody. So far, nobody’s lit a flaming bag of dog poop on our doorstep.

"Maybe Halloween isn’t as extinct as I thought." 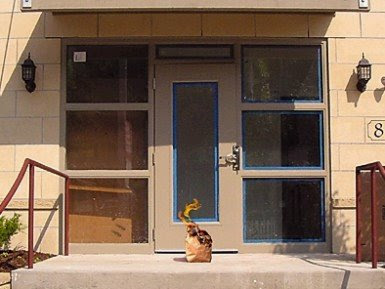 What a sweet story - I think Ted & Marsha have the best of all possible Halloweens!