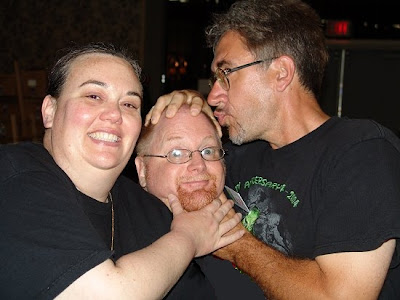 Above: Jane the Voodoo Queen, Max the drunken severed head, and the founder of the Universal Monster Army, Terry Ingram.

From now until at least mid-December, this blog will focus on the Universal Monster Army. Not exclusively, but since this blog is meant to be a far-flung outpost of that Yahoo group, and as the UMA has reached its fifth birthday earlier this month, I'm in the mood to celebrate this monster militia!

I asked Terry Ingram some questions about the UMA. Here they are with his responses:

Max: Why did you found the UMA? Was there no other group talking about monster toys?

Terry: I founded the UMA on November 6th, 2002. My reason in creating the group was to simply archive all of the monster toy photos that I had on my hard drive. I wanted an online scrapbook of every monster toy ever made with a Universal likeness.

I owe a great deal of gratitude to Mike Scott for the early development of UMA. He was there with me from the very beginning; adding pictures and teaching me the inner workings of Yahoo Groups. Mike is a very mysterious man. I've known him since 2002, and yet I don't know him at all. I wouldn't know him if I bumped right into him on the street! And yet to this day, he's still assisting me in creating the future of UMA.

There were no other forums about monster toys at the time, that I was aware of anyways, and the only web site that was in alignment with my goal was Ray Castile's Gallery Of Monster Toys. The difference between Ray's wonderful site and the UMA was that Ray only included toys that he could provide background information for. His site was, and still is, an extremely informative site with details about the toys he has decided to picture, while I on the other hand simply wanted an endless gallery of ALL Universal monster toys whether I had info about them or not. As fate would have it, Ray and I would become very good friends. He and I launched the UMA Toy Tour together (with many others included) in the spring of 2006 and it's still rolling ahead into 2008. He's now also a co-owner of the UMA.

Max: What surprises or opportunities has this group brought you?

Terry: My biggest surprise and pleasures have been all of the people who have enlisted in the UMA. Many of these people, like yourself, Max, have become very dear friends of mine. When I first created the group, the idea of having a message board was never on my mind. Again, all I was interested in was just uploading photos. I guess if you build it .. they will come! And boy did they! LOL!

Max: Which is your favorite monster and why?

Terry: Hmmm. I get asked that question a lot. That's a tough question for me to answer because all of the monsters represent something different to me. I like the Creature because of his unapologetic right to exist. He's a nomad with a good healthy sex drive. He knows what he wants, and he knows how to get it. Where as the Frankenstein monster demanded a validation from his creator and others to exist. He wanted to be loved. I guess that was because the Frankenstein monster was created with human components. We all want to be loved by someone.

Max: Most valuable piece in your collection?

Terry: That's another question that's frequently asked by visitors to Castle Famous. I guess it would have to be the Frankenstein head speaker. That and the big yellow blow mold 19" Big Frankie bank. His arms move back and forth just like the Aurora Big Frankie. Obviously a rip off from the model kit. These are toys that are valuable to me in a personal way and not according to some ridiculous price guide. I really hesitate in having to place monetary values on collectibles. It's all so relevant to individual likes and dislikes. It's worth is truly determined by your affection for the item, and not someone's blue book value!

Max: Why the "Army" schtick?

Terry: Got to be honest with you on this one and tell you that it was inspired by the KISS Army. I was your typical 15 yr old boy back in 1977 and KISS was all the rage back then. They helped me to come out of my shell, grow my hair long, and start playing drums in rock-n-roll bands! I blame them for all of my current troubles! I should have listened to Mom and went to college. LOL!

Max: What do you think makes it a successful group?

Terry: That's easy .. it's the people. The UMA is like one big extended family. Without the people, the UMA would simply be a lonely monster toy archive. Having great moderators also helps! I would also like to stress that we're always looking for new recruits. Our doors are always open to everyone. We not cliquish. We want to meet new friends. We bid you welcome 24/7.

Max: Most fun monster items you had as a kid?

Terry: The 1964 Monster Old Maid card game is the monster collectible with the most sentimental value to me. I played with that game constantly at my Grandmother's house. I remember spreading all the cards out across her shag carpet floor and just staring at the monsters intently. I was fascinated. If only I could go back for just one day and relive that moment. I also had all of the Aurora kits. My brother and I would spend hours painting those things only to set them on fire when we grew weary of them! What foolish arsonists we were!

Max: Was the Old Maid game your first exposure to the Universal monsters? If not, what was? Did it affect your daydreams or nightmares?

Terry: My first exposure to the Universal Monsters was watching "Horror Incorporated" with the horror host Dr. Paul Bearer. "Horror Incorporated" would show on channel 5 in the Minneapolis area, and was also the local ABC affiliate that showed the Shock Theater package in the 60s. They would show all of the classic Universal horror films. These films would show on tv late at night, and I remember pleading with my mom to allow me to stay up late and watch them. Surprisingly enough, she was very supportive and even helped me stay awake so I wouldn't miss seeing them! I never recall having nightmares over these films, but oddly enough I did daydream about them. In fact, believe it or not, my daydreaming over a certain monster actually led me to my first moment of sexual awareness! She was one seen in the Hammer horror film "The Brides Of Dracula" and on a certain Spook Stories gum card that caught my fancy like never before. I recall staring at Andree Melly and being strangely attracted towards here even though she had giant vampire fangs! I was only around 8 yrs old at the time, but I couldn't stop staring at her. Looking back at it now, it had to be the giant cleavage that Hammer was so well known for and not the fangs that seduced me. It really was my first sexual awakening! Isn't that hilarious?

Max: For me, "Vampire Circus" is the Hammer film I saw as a kid that awakened my earliest sexual feelings. Guess I was a healthy, red-blooded kid! And speaking of health (oooh, what a segue!), what is the health of the classic monsters?

Terry: I would love to be able to say that the monsters are alive and well, but I'm not so sure anymore. They are iconic enough where I don't think their going to totally disappear like the dinosaurs, but they're no spring chickens either. There are other monsters which seem much more relevant to kids noawdays than grease paint and bolts.

Terry: Bride Of Frankenstein, Dracula, and Creature from the Black Lagoon. In that order.

Max: What is the main purpose of the UMA?

Terry: World wide domination. We want to be everywhere in every home. All this leading to an eventual hostile takeover of Universal Studios itself. We need to get those overpaid suits out of the front office, and get folks who truly care about classic monsters back in. What we need here is a monster revolution, and uprising. And I'm not talking about Van Helsing either. After we seize control of the studio, we then move forward in revamping their parks. Jaws and King Kong are out. Enter in the Creature from the Black Lagoon boat ride, and the Bride of Frankenstein wind mill attraction!

Max: Describe one scary memory connected with a classic monster.

Terry: My most frightening moment with a classic monster movie would have to be Night Of The Living Dead. That's the movie that truly terrified me as a kid. I snuck into that film without my parents knowing. After having seen it, I remember feeling dirty and unclean. No other film had made me feel that way as a kid. I felt guilty for having seen it. And to this day, the film is still disturbing to me. I feel more comfortable around my beloved uni-monsters.

Thanks Max for the questions!

Soon the UMA will be moving from its base at Yahoo groups and into new message board headquarters! More on that later.

As a moderator and long-time member there, I look forward to it. Go here to join the current group and see all the sights and meet all the cool creeps and Monster Kids.
Posted by Max the drunken severed head at 6:22:00 AM