Boris Karloff reads "The Year Without A Santa Claus" 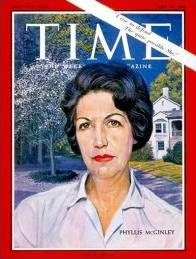 Phyllis McGinley, a Pulitzer Prize-winning writer, in 1956 published a children's story, The Year Without A Santa Claus, in Good Housekeeping magazine. It was printed in book form the following year, in the same season Dr. Seuss' How The Grinch Stole Christmas debuted. The cadences and rhymes of both books were similar, as was the central idea of Christmas missing one of its elements -- Santa Claus in the McGinley tale and gifts in the Seuss story. In the 1960s, the late, great horror actor Boris Karloff, known for his rapport with children and fondness for kid's literature, lent his voice to adaptations of both titles.

But unlike his work in the animated Grinch, Karloff's audio recording of The Year Without A Santa Claus is little heard today. Recorded in 1968, it was one of his last performances, as he died in February 1969. The recording is all the more amazing when you consider that Karloff had terrible emphysema at that point and was using less than one lung. (By contrast, he sounds fit in the Grinch role, which he recorded only two years earlier, in 1968.)

Now, thanks to a friend, I'm sharing it with you as a Christmas present! (Mike Shanley of the great shanleyonmusic jazz blog has it on LP.) He told me about it a few days ago, and then transferred it to a disk for me. I'm grateful to him, as this is one sweet gift! The album was produced by Capitol Records as a special product for the E.F. MacDonald Incentive Company, a marketing and promotional business. On the flip side of the record are Christmas songs by such artists as Glen Campbell and Peggy Lee. Here's the front of the album: 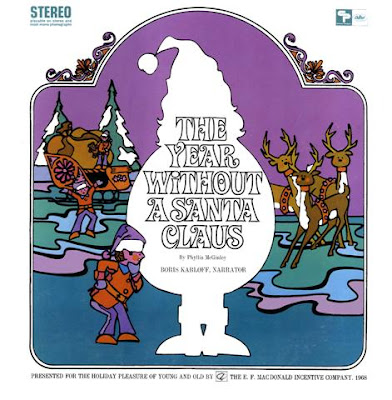 Because of my wonky computer, it took me eight hours to upload this and post about it, but man, do I feel happy! I'm as merry as a schoolboy! I'm as giddy as a drunken man! (I'm slap-happy from sleep deprivation!) Listen to Boris returning from the shadows to share this helping of Christmas cheer, and you'll be giddy too!

Boris Karloff Christmas classic for children of all ages 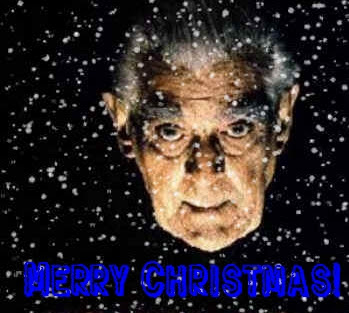 Special thanks to "The King of JingaLing" and "Karloff 3" at the fine Falalalala website, where people keep Christmas in their hearts all year 'round.
Posted by Max the drunken severed head at 1:28:00 AM

You're welcome! And Merry Christmas to you, S&M!

What a wonderful christmas gift! Thank you, Max. Happy holidays to you and the voodoo queen!