MY RUNNING MATE, THE BRAIN! 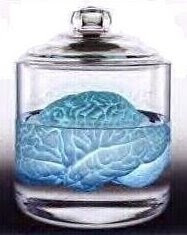 Yes, I have at last chosen my running mate! ('Bout damn time!) The smartest guy I know, ALLEN'S BRAIN!

Unlike conventional politicians Barack Obama and John McCain, *I* have gone for the OBVIOUS choice.

Also, the only candidate who returned my phone calls.

The following is a transcript of the conversation I had last week with the Brain that led me to decide he was the one to be at my side:

Max TDSH: As you know, I'm considering you as my choice for veep. Will you answer some questions? Some were recently left in the comment section of the blog.

Allen's Brain: Ask away, sir. With my newly-repaired pneumatic lift, I shall rise to the challenge of answering these questions. Of course, if you have additional (and probably better) answers on some of these, feel free to advise.

Max TDSH: Thanks for starting off by sucking up. I find that refeshi-- reefish-- uh, very satisfying!

Allen's Brain: I exist to serve.

Max TDSH: Well, here are some questions from a commentator who signed himself as "An anonymous felon."

Max TDSH: Well, many of them seem to hold public office. Or perhaps it was my old friend, the Dominican friar and jazz musician, Felonious Monk. (Ha ha!)

Allen's Brain: Max, I beg you not to tempt me to use deadly telepathic force.

Max TDSH: Okay, okay, settle down. (Sheesh, one lousy pun and I get threatened...) Here's question #1. "Ask him what he'd do for a sagging economy."

Allen's Brain: Higher taxes! And lavish raises for everyone on Capitol Hill! We'll live the lives of the Roman emperors! It's about time we start the bacchanal! And I would set a historical precedent with the minimum wage, by being the first to lower it!

If that doesn't cause the economy to droop, we'll just have to wait for old age and gravity to take its toll. Next question.

Max TDSH: I think he means what would you do to repair the sagging ecomomic -- ecognomic -- ecomedic-- financial situation we have now.

Allen's Brain: Oh..."My bad!" as the youth of America like to say. Hmmm. We should re-introduce slave labor. Zombie slave labor. Every cent we aren't paying our zombie workers is another cent in our pockets! And I'm thinking of adding a "Free Beer Friday" twice a month to the calendar. Do I have the power to do that?

Max TDSH: If I get in office, you will! Alright, moving on. Question #2 is about foreign policy. "I hear there are 'weapons of mass destruction' in the country Borogrovia! What should be done about them?"

Allen's Brain: Hold insurance policies in several different nations. I do! It never hurts to be too careful, just in case I have to be exiled--erm, in case I'm on vacation abroad.

Max, tell him this: "I think I stand with the Head when I say that the greatest path to better foreign relations is to hold tastings of their native alcoholic beverages, be it beer, wine, or brain--grain--alcohol. We drink to one another's health (good health, preferably,) compliment them on their beverage's distinctive good qualities, and assure them that we believe it is representative of the goodness of their respective nation. Then, we'll have another. This should boost the national spirits. This policy may difficult to carry out with Muslim countries, but I'd be happy to enjoy Turkish coffee and baklava with them.

"As to Borogrovia-- The Borogroves have been all mimsy as of late, but I don't believe that they are any threat to the safety of the United States. There are weapons there, (I should know, I developed them for a rather large fee), but they are weapons of m'ass destruction-- we'd only lose our behinds if they were used on us. But importantly, WHAT I CREATED I CAN DESTROY!"

Max TDSH: Question #3: "Illegal immigration is a concern these days. What does Allen's Brain suggest be done about the sudden influx of gypsy fortune tellers that are stealing carnival jobs from hard-working Americans?"

Allen's Brain: Nothing! Who would protect those whose walk is thorny?

The biggest problem in the carnival fortune-telling industry is not gypsy immigrants, but rather those fairground fortune-telling machines. Don't blame immigration, blame science and industry. If you are any good at foreseeing the future,then you already know what I'm going to do about it. If you aren't, consult the nearest "Zoltan" or "Madame Blavatsky" machine.

Allen's Brain: Yes. I once took $666 from Lucifer to attend a meeting with my advisors in the business community. But that led to the development of the Chia Pet, a fine product popular at office Christmas parties!

Also, Charon the ferryman gave me $50 once for advice on entering Cerberus into the Iditarod, after Hell froze over when Michael Jackson got married to Lisa Marie Presley. But I see nothing wrong with any of that.

Max TDSH: Well, I certainly see something wrong with Michael marrying the daughter of The King! But, never mind that. Brain of Allen, YOU are the chosen one! Congratulations!

Update: Yesterday, I asked Allen's Brain, "Have you gotten Palin and Biden to agree to a debate?

He replied, "I'm due to debate Sarah Palin in a week or so. Biden refused to stoop to my level (which probably says something about his feelings toward the physically-challenged,) but DID comment that my jar was nice and clean."

We are now firmly planted on the national political stage!Ladies and gentlemen, a glass ceiling has been broken. We of the no-body community are no longer nobodies!
Posted by Max the drunken severed head at 2:53:00 AM