(Or, What Barack is Grateful to Me For)

I ran into Sen. Obama today at a campaign rally I'd organized for my supporters. (He was in Pittsburgh for his own rally earlier in the day.) He came out to see, he said, "just what kind of voters could conceive of voting for a severed head and a brain in a jar for the highest offices in our great nation." (Yeah, he really does talk like that.) But he was kind to Allen's Brain and I, and we noticed he really is as clean as Joe Biden said he was. In fact, he smelled really nice. (I think he wears Old Spice, just like my dad used to.)

He and I were both shocked at my supporters' response to his presence. One man screamed "Irishman!" (I think he thought Obama had an apostrophe between the 'O' and the 'b'), and another yelled "We don't need 'the troubles' here!" Yet another waved a sign that said "No potato eaters in the White House!"

Many of my supporters aren't very bright.

I tried to tell the crowd that although he was my opponent, Sen. Obama was a decent family man, and an American patriot. But they just yelled he was "Black Irish" and should "go back to Belfast."

I took Sen. Obama out for drinks later at the Two Party House, a bar I like. The Senator got pleasantly buzzed, as you can see: 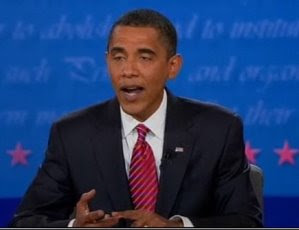 Here he is counting the number of double Zombies he'd had. He was off by two. (Maybe he couldn't use all his fingers to count on; I noticed bruises on his knuckles from where people had been fist-bumping him all day.) I bested him by one double Zombie, heh heh.

He promised to keep me and Brain perched on his desk in the Oval Office when he's elected, but he was plastered when he made the remark, so I don't expect him to keep his word. But he was funny and friendly with me after he'd had a few under his belt. And I tried to hug him after I'd had a few, but of course had no arms to do it with. I just got my nose caught on one of his sleeve buttons.

You probably need a drink, too, waiting for this campaign to end. So here's the recipe for the cocktail that knocked me and Obama for a loop:

Mix ingredients except for the 151 in a shaker with ice. Pour into glass, fill with orange juice, and top with the high-proof rum.
Posted by Max the drunken severed head at 1:21:00 AM

You had it easy. I was stuck debating Tina Fey!

I'm tempted to make a "-bating" joke about the lovely Tina Fey, but I won't...