Q & A with a Robotics Engineer

Hi. I enjoyed meeting you. About my questions--understand that I know little about the field that you work in.

My first question is, what is your job title and what are your duties?

My title is Jr. Mechanical Design Engineer and my main duties are designing prototypes for the robots at my company. I start out with an idea and I take that idea and create a 3-D model in Solid Works. I then get in contact with manufacturers who will be able to create my CAD [computer-aided design] model into a physical part.

What is Solid Works?

I have always been interested in the field of engineering since I was born. Both of my parents are engineers and my father always had different products and technology all over the house.

Can you name one or two that fascinated you?

The latest product my dad had in the house was a mini R2D2 that you were able to control through the computer manually. I would drive it around to find my family cat and have it stop in front of her and state "here kitty kitty kitty". It amused me to say the least haha.

The main one I remember when I was younger was an old school laser disk player that I was able to take apart and see all the components of how the player was put together.

When I was 8 my sister had a basic toy robot and I was really interested in how it worked. (I can't remember what kind it was, but it was a dome-shaped robot with "whisker" touch sensors on it.) So I decided to take it apart, but I got caught red handed by my dad and he said if I did not put it back together in working condition before my sister finds out I would have to pay for a new one with my allowance. So I sat there and figured out how to get all the parts back together and it worked for the most part! So that is how I got into robotics.

Can you describe the purpose and functions of a robot that you've designed that your most proud of?

The robot that I have designed that I'm most proud of was actually three of the same robot-- I created a "swarm". Swarm robotics is relatively a new field of robotics which allows multiple robots to cooperate and communicate within a group. I was able to take away certain features (i.e. the camera) on one robot and it was able to talk to the surrounding ones to let them know it could not see. The robots with camera capabilities would then get in front of the "blind" robot and lead it back to safety.

Have any robots you've seen in your career go "haywire" or created unintended consequences? If so, how?

Every one of my robots would go haywire in one way or another. The main one I remember is that I programmed a robot to go through a maze and find a pink box. I let it loose and it started to spin in circles and then drove straight into a wall, making all the touch sensors fall off of it. It was funny after I was able to fix the sensors back on to the robot but at the time it was very frustrating!

Who is your favorite robot in pop culture/science fiction?

One of my favorite is Wall-E (of course) but my favorite of all time is probably would of course be R2D2 and C3PO... I love Star Wars!

Those seem to be the main areas in life where robotics are being used! I can't think of any other areas. Those are the main broad areas that robotic technology is being used for.

I KNOW that robotics will improve the military because it will save numerous lives out in the field. Robots will be able to be sent into dangerous situations where if they get destroyed its ok to lose a million dollars but not a loved one. Robotics and technology in the military will also give those who use it a heads up. You will be able to explore new places and areas where either a soldier cannot fit into it or it is deemed unsafe.

Do you think genuine self-consciousness will ever be possible in A. I.? If so, how far away from it are we?

I do not think A.I. will ever get to be as consistent with a human being's behavior as seen in movies and such. Everything that is done to a robot is done by a human being. I do not believe that technology will get to be as precise as a human brain since we have so many sensory "devices" (i.e. smell, touch, taste, hearing...etc.) that it would be near impossible to implement all of those devices and have them work in unison into a robot.

In Japan, there are signs that robot pets and humanoid robots can not only entertain, but may make useful companions for human beings who live alone. Is this a good thing for our species? Could it lessen our need for human companionship?

I feel that humanoid and robot pets will not decrease the need for human companionship. These devices are geared towards the elderly and those who are in hospitals who can not take care of an animals basic needs (feeding, walking, cleaning etc). This is great for those in that situation. In some studies it actually showed some kids who had a robotic pet or robotic toy that responds to their touch and voice, it gave them more confidence to be able to go out and interact with other children. The toy does not give off any negative feedback to put down the child in any way shape or form. Now in the toy respect, many kids imaginations probably get taken away from them at an early age because the toy is moving and talking by itself. I know when I was young playing with Teenage Mutant Ninja Turtle action figures I would move the arms and legs and make voices and recreate fight scenes from the cartoon series! Although the lack of imagination could be taken away from them, the introduction to technology and robotics at a young age could spark interest in the field of engineering. (Which is awesome). This question can really waver either way and I could go on forever about this (and all of these questions)!

One last, OPTIONAL thing: I sent an e-mail to a very good friend, Pierre Fournier, a writer and intellectual, about meeting you. I asked him what questions he might suggest for someone in your field. He's a thoughtful person, but he either thought I was kidding, or wanted to have some fun with me, and he sent some hilarious joke questions. I'm sure he didn't think I'd ask 'em. Well, I'm gonna show him! Here's his questions, and if you want to answer one (as a gag), I'll run his question--and your answer! (I'm sure experts in your field have to show a sense of humor in dealing with the public, anyway!)

PF: When can we expect cool robots like Gort with laser beams coming out of their eyes?

I feel that if you have enough money and enough patience you can make robots with laser beams coming out of their eyes. Do I feel like this is necessary or applicable in any shape or form? No. Money and technology is what robotics revolve about. I feel that maybe once we make robots that can save lives in the military and medical fields maybe some mad scientist will make a laser beam robot!

PF: Do you think that a Disney Animatronic character will ever be elected as President of the United States?

Some past presidents have been tied to strings and told their every move and every word to say, so I do not see any difference between that and a robot! But I do not believe an animatronic robot would be able to rule our nation. The person behind the development of the programming in the robot would be the real president of the united states. But the one good thing about a robot being the president is if it gets assassinated a new one could be created without any harm!


PF: Is the Roomba a robot, or is it just a fancy vacuum cleaner?

Ooooh, the Roomba. I actually met the creator of the Roomba and the engineers at I Robot. I Robot does fascinating robotics but I feel that the Roomba is a hybrid of a robot and a fancy vacuum cleaner. It does have the smarts to stay away from ledges and stairs, but it basically uses the right hand rule algorithm to plot out its path. But that path is limited due to the environment and space it is released into. My friend owns a Roomba and the main thing he says is that even though it says you can set it and walk away, you still have to pay attention to it because it is known to get stuck in spaces. Even though I am a robotic nerd I still prefer the old fashion way of vacuuming and doing it myself. It's quicker and it saves a lot more money!

Thanks so very much for answering questions for my blog, The Drunken Severed Head.

These are some of the competitions Ms. Wong has won:
Related link: News item from her high school days about Ms. Wong and her prize-winning robots.

Related link: I Robot, Your Companion (article on planning the "Cognitive Robot Companion.") 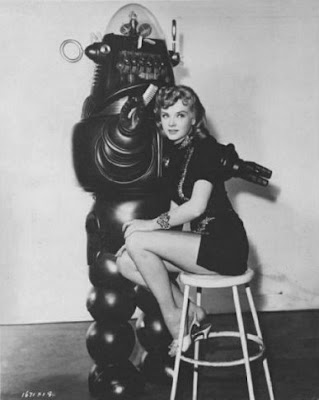 The Roomba has "the smarts to stay away from ledges and stairs".

Wish I could say as much about YOU, Max!

Feh. I'll bite your toes next time I see you...