Tribute to Forry Ackerman: A Report 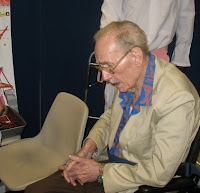 A week ago, at the Egyptian Theatre in Los Angeles, hundreds of people from around the country came to pay tribute to Forry Ackerman, "Mr. Sci-Fi" (a/k/a "Uncle Forry" to generations of fans of Famous Monsters magazine.) It was, by all accounts, an often very sad occasion -- his death being an event that just seemed impossible. So I illustrate this intro with a sad photo of Forry that came from his last days. It moved me when I saw it -- to see the ever-smiling Forry looking sad made me feel awful, since he'd made me and many others happy.
(Photo courtesy Lawrence Neopodahl.)

It was an afternoon to remember. In the middle of Hollywood, in the theatre that was built as a companion movie palace to the famous Chinese Theatre just down the street, a crowd of friends and family, many of whom had never met, gathered together to remember Forrest J. Ackerman. The theatre was more than filled to capacity -- the last few stragglers who arrived late were allowed to enter and stand at the back of the balcony or along the sides of the main auditorium so they could share in the reminiscences. The audience was asked, “What was your first issue of Famous Monsters?” For most of the people in the audience, seeing the magazine for the first time was a life-changing moment.

The answers unleashed a flood of memories for those who had grown up with Uncle Forry guiding them into worlds of fantasy, Science Fiction, horror and monsters. Nearly everyone in that theatre remembered with crystal clarity when and where they were initiated into a fantastic world of gods and monsters by a man whose influence on popular culture they could barely guess. There were thoughts of walking into a local supermarket or a drug store and discovering a Basil Gogos-painted Vincent Price or King Kong, staring out from the magazine rack. Memories of the smell of the pages; of the photos, the filmbooks, and the strange and wonderful items advertised by the Captain Company. And the puns…oh yes, those wonderful, awful puns.

First to speak was Ray Bradbury; his presence brought the crowd to its feet even though he was confined to a wheelchair, and looked as though time had taken a toll on him. However, when he spoke in a strong and steady voice the audience could tell that time has no hold on this man whose timeless tales have enthralled generations. Mr. Bradbury spoke of his friend Forry, and the kindness and support Forry had given him in his early years as a struggling writer. He showed the audience the debt we all owed to Forry Ackerman for helping a young struggling Ray Bradbury make his first professional sale as a writer and begin his brilliant career.

There were stories of others Forry had represented and guided in the world of science fiction. Stories of the Los Angeles Science Fiction Society, which Forry had helped found. Most important of all, Mr. Bradbury explained that he and his friends Forrest Ackerman and Ray Harryhausen had been able to grow up as men, but still retain the ability to experience wonder as children.

Others were introduced and told tales, some of which we had read or heard before, but all were heartfelt and meaningful. John Landis read a letter from Ray Harryhausen who described his first encounter with Forry which lead to a life long friendship. Landis read a brief note from Stephen King which said simply, “Tell them all that I love that guy!” Landis related his own tales of Forry and his generosity and kindness toward him and his family. Bill Warren, author of the book Keep Watching The Skies, movingly told of his long relationship with Forry until his emotions wouldn’t allow him to continue. Brad Lineaweaver, former editor of Cult Movies magazine, spoke of projects he and Forry had worked on together. Director Joe Dante related how he had an article published in Famous Monsters as a teenager and the incredible thrill he felt upon receiving a large package from Forry filled with encouragement and praise for his piece. Rick Baker spoke of the inspiration he found in the pages of Famous Monsters, learning about the men behind the monsters and how Forry helped shape him from ordinary kid to “Rick Baker, Monster Maker.” Guillermo Del Toro flew in from New Zealand especially to attend and share his memories of Forry. As a young boy in Mexico he said he had written a letter to Forry asking to be adopted. Unfortunately for him the letter was intercepted by his father and never reached Karloffornia. But when Guillermo did make it to Los Angeles he dialed M-O-O-N-F-A-N on the telephone and started his relationship with Forry. Del Toro said that whenever he was in Los Angeles he had to visit Forry, it was a pilgrimage for him and it usually meant a visit to the House of Pies. The editor and staff of Rue Morgue Magazine came from Canada to remember Forry’s legacy and vowed to continue it, in their own modern way, of course. When the tributes were over, Joe Moe, Forry’s most recent care giver and helper led the crowd in a rendition of one of Forry’s Al Jolson favorites, but with a slight twist. The song became “Forry Boy” and with the assistance of Forry’s good friend and the executor of his estate Kevin Burns (who does a perfect impression of Forry’s voice) there was joyful singing and laughter. Finally, there was a farewell from Forry himself, appearing on the video screen Forry bid all his friends, nieces and nephews a final good bye.

The audience emptied the theatre, but an hour later refilled it for the American premiere of the documentary Famous Monster: Forrest J. Ackerman which was made for Canadian Television and did a wonderful job of chronicling Forry’s life. It seemed all too brief, but it did cover much of what made Forrest Ackerman the influence he was on popular American and international culture. Through the commentary of his friends and acquaintances and from Forry himself, the generosity and humanity and great joy for life itself of the man unfolded, letting us know just a little better the man we grew up with.

In the end all us Monster Kids, the sons and daughters, nieces and nephews and assorted cousins of Forrest J. Ackerman have come to realize that it wasn’t just the magazine, Famous Monsters or the fabulous collection of memorabilia which he so generously shared or his writing or editing prowess that endeared this man to all of us. It was the man himself, his generosity of spirit, his love of life, his embracing of all things strange and unusual that guided us and helped shape us into the people we are today. As it was said repeatedly that afternoon, there will never be anyone like Forrest J. Ackerman, no one could possibly take his place. His presence among us will be missed sorely, but his true presence and influence will always be with us. Forry can not be forgotten he is too much a part of us; we are his legacy.

You can hear a portion of the tribute (including tributes by John Landis, Guillermo Del Toro, Rick Baker and Ray Bradbury) at this link, the March 14th entry of the website of the Los Angeles Public Radio Station KPCC. The Ackeman tribute portion comes just a little past the six minute mark.

"There will never be another time, another era, in which someone like FJA will grow and flourish and touch people as he did with his work and attitude." --writer/filmmaker Ted Newsom