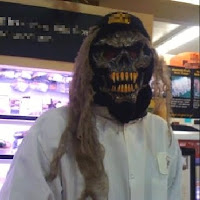 "Lee Buick" is not a car dealership. No, Lee Buick is a young co-worker and friend of mine who came here from Scotland. He's a very good-humored, thoughtful sort of fellow--just an all-around nice guy. He agreed to share with readers of TDSH some memories of Halloween in Scotland, which follows.

As a wee boy growing up in Edinburgh, I remember dressing up as Dracula on Halloween night. Besides preparing me with the requisite black hair and fangs, mum also handed me a turnip as I walked out the door. In Scotland it’s not “trick-or treating”, it’s “guising” and instead of carving pumpkins, we carve turnips. Every year my brothers and I would go out guising together. In this tradition when you arrive at each door, you first recite a poem, sing a song, do a magic trick, or perform some other form of entertainment to persuade an offering of a treat. If your performance wasn’t well-received, you might get nowt (nothing)! (In the high school years, retaliation for this rejection was sometimes given through an egging, which, of course, I never participated in.) While we walked the neighborhood, my brothers and I would carry our carved turnips, called turnip lanterns, to light the way.

Turnip lanterns are carved similarly to jack-o-lantern pumpkins, but because turnips are smaller and harder, it’s no easy feat. The smell of the vegetable as the candle gently roasts the inside of the lantern is delicious. It must be added that I won first prize both at cub scouts and at school for the Best Carved Turnip. Turnip lanterns seem likely to be one of many Halloween traditions in Scotland that came from the Celtic or pagan festival of Samhain, which means “summer’s end”.

Mum would always have our favorite game ready when we got back from guising with our loot. It was called “dookin’ for apples”. In this modified version of bobbing for apples, each player uses a fork to literally stake their prize. Kneeling on the back of a chair, you lean over a basin of water and apples and drop your fork down, hoping to spear one. I was always very good at this game and even got my apple in the first try several times. Another favorite game was one in which a treacle or syrup covered scone was hung on a string and you had to bite it down without using your hands. Needless to say it was a laugh to see your friends and family members covered in a sticky mess.

At Halloween time at school, we always read Scottish poet Robbie Burn’s “Tam o’ Shanter”. It is a story of a man who stayed too long at the pub and what strange sights he sees on his way home. In a familiar situation, ladies’ man Tam had been warned by his wife to not stay out too late and not to drink too much. When he finally wanders home in the dark with his horse, Meg, he rides past the local kirk-yard (churchyard) only to spy a strange bonfire burning. There he sees a ghoulish collection of witches, warlocks, and the devil himself, dancing round the fire. Tam watches quietly until a beautiful, and scantily-clad, witch pursues him and gives him chase. Tam escapes, but the witches tear off Meg’s tail. Burns’ poem had a strong effect on me at the time, though the impact has lessened over time, especially the message of always listening to your wife’s directives. 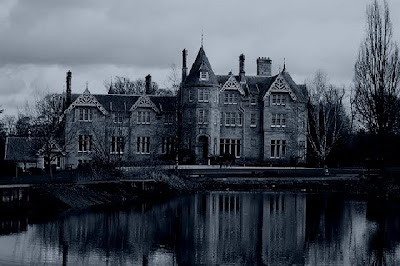 Below: Some Scottish children of Lee's grandparent's time, in a 1948 photo from the online LIFE magazine photo archive. The caption says they're children of the town of Ayrshire who were celebrating at a Halloween season "Jolly Beggars" gathering to honor poet Robert Burns. 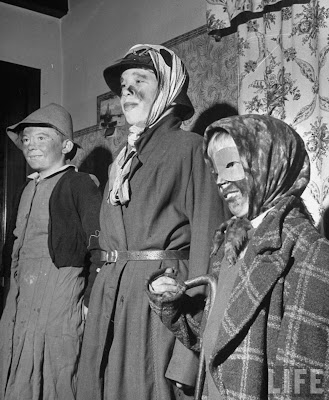 "Coffins stood round, like open presses,
That shaw'd the Dead in their last dresses..."
--Robert Burns, Tam O' Shanter