A Rondo rondo! Nattering with nominees

The voting process for the 2009 Rondo Hatton Classic Horror Awards will soon end-- the last day to send in a ballot is April 3rd. I'm hopelessly outclassed by many of my fellow nominees for "Best Blog." So I was curious to talk to others in that category-- as well as other honorees in other categories-- and sent out some questions to various folks who were recognized with nominations. Some actually sent back answers! (Bit of a sausage party, though; the female nominees I sent questions to have yet to respond. Guess women may really be smarter than men!)

So here is some Q & A (sorry if you were expecting T & A) with some smart, talented, active lovers of classic horror. The participants, in no particular order, are: 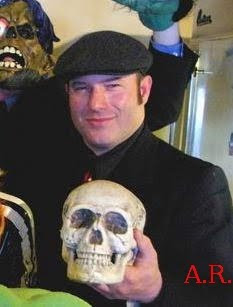 Nominated for: BEST BLOG (The Good, The Bad, The Godzilla).
Terry Ingram 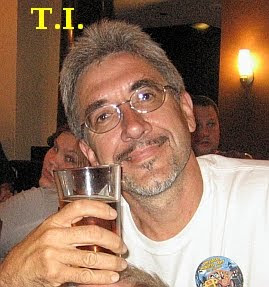 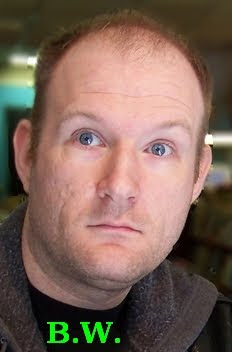 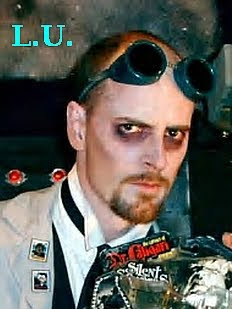 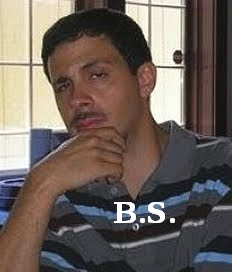 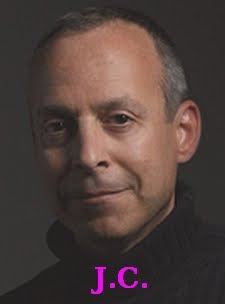 1.) Why do you think you were nominated?

TI: Because I pay David Colton good money. That's why.

Because there's 2,603 of the world's finest who make up the UMA. I wasn't nominated. WE were nominated.

BW: Back in 2008 I kept emailing Dave Colton about it, putting a bug in his ear about being nominated and it just so happened to be the year that he added the Best Blog category. So basically, I harassed him until he put me in the running. This year, however, I have no idea. It's tough to gauge how you're doing when everyone else with a blog looks like a pro to you. So it's encouraging to know that I'm still thought of as Rondo material and I'm grateful for it.

LU: I've been doing this gig as a horror host for more than a decade now - I guess folks just like good old fashioned cheesy-horror fun.

BS: To tell you the truth, it's just as much of a pleasant surprise as it was last year! I always think that having a blog that's not too specific, and somewhat generic in terms of what it covers (i.e. mine) can go either way. Either people will find it engaging and welcoming to all, or just bland and wishy-washy. I'm guessing the Rondo people went with the former, and for that, I'm flattered.

JC: I know David Colton personally so I was a shoe-in. Wait a minute, I didn't know him until I got nominated...hmmm. Let me see...oh, right, it was because a few years back, some short-necked dude named the Drunken Severed Head mentioned to David he should cast his net wider to include horror blogs that start with the letter Z. David listened, and so there I am.

LU: Have a beer in celebration.

BW: If I win, I will issue a press release to all media outlets. I will invite all bloggers everywhere to "suck it" and the accompanying photo will be a close up of my middle finger. Okay. I probably wouldn't do that because in spite of a smarmy exterior, I'm actually pretty humble. I'll probably just tell my wife and then call my mom.

BS: Last year the wife and kids surprised me with a cake, just for getting Honorable Mention. Sweet, aren't they? Here's hoping there's an even bigger cake in my future.

LU: Have a beer in consolation.

TI: Same thing I'd do to reward myself - drink.

BS: I guess my answer would be cake, again. Although this would probably be of the Entemann's variety, eaten straight out of the box and washed down with tears.

JC: Eat two McDonald's Filet-O-Fish sandwiches with lots of french fries. Maybe three, even. Hell, why not? Either way, I can't lose. I'll probably drown my sorrows with a McCafe frozen something.

4.) Other than B-horror movie actor Rondo Hatton, who do you think the award looks like?

BW: Exhibit A in a bludgeoning murder trial.

LU: Maybe Richard Kiel, if he were bald.

JC: Eric Powell's The Goon, for sure.

TI: It means the voters are all old.

BW: I think it was originally an award given to people who celebrated horror in the classic sense. By that I mean the golden sort of Universal Age of horror. From the dawn of horror on film to the early 60's. These days, though, what was considered contempo around the inception of the award is quickly falling into the classic category. Sort of how songs I remember fondly from my childhood are now getting routine rotation on "classic rock" stations. Abbot and Costello never met up with Jason Voorhees in a zany horror comedy but the franchises that a lot of modern horror fans hold on high are now becoming "classics".

LU: Originally I think it meant just that, appreciation of classic horror meaning films of the classic (30s-70s) era. But over the years it has expanded to include modern era films as well.

BS: I find that they've been embracing more than just the strict definition of "classic horror", which I think is a good thing. If you notice, the Classic Horror Film Board actually has message boards dedicated to all eras of the genre; if anything, they just lean a little heavier on the so-called classic stuff. These days, I think their definition of "classic" is less related to time period, and more just to a general standard of quality.

JC: The "classic" stands for all those wonderfully fun movies we love to scream at, or hoot at, or snicker at, or even laugh out loud at. It defines a sensibility more than a decade. It stands for a sense of nostalgia and the once forbidden made okay. It stands for all the colors in black and white and red, and hints at Halloween candy and Autumn winds and the fear found only in the darkest nights and in the brightest days. Its ballyhoo and cult and simply unforgettable no matter how hard you try.

6. What person you've never met has been the biggest influence in your interest in horror?

AR:Eiji Tsuburaya, the visual effects director who gave Godzilla life, who passed away 40 years ago. Greg Shoemaker (editor of the legendary "Japanese Fantasy Film Journal"); while we've corresponded for more than 30 years (on and off), we've never met in person. Anyone ever associated with the heyday of Hammer (excluding Sir Christopher Lee and Veronica Carlson, of whom I've had the pleasure of meeting), and lastly, the immortal Vincent Price.

TI: Bela Lugosi. Catch his tweets from beyond at - http://twitter.com/IamBelaLugosi

BW: Bill Gaines of EC Comics fame. Apart from his association with Tales From The Crypt and Vault of Horror, etc. he had a set of ethics that greatly informed my own. He and his creative staff were a bunch of renegades that fearlessly blazed trails in the face of censorship. Whether they knew it or not, being antagonistic toward "the man" had a much bigger effect on their readers and fans and they did much more by being a pain in the ass to the Comics Code Authority than just bringing gory comics to kids. In a lot of ways, Gaines was a pretty level headed entrant into the counter culture and I'm told he was a pretty cool guy, too. His influence also made its way to filmmakers down the line that I very much appreciate today. So there you go.

LU: Alice Cooper--when I was a kid one of my first influences on my pathway to horror was Alice Cooper. It makes total sense now, as he's pretty much the musical equivalent of a horror host. When I discovered his music and stage show it was like an epiphany... And now here I am years later both hosting horror movies and fronting a horror band and doing some shock rock antics of my own. Hope to meet good ole Alice one day and let him know what an influence he was.

JC: Ray Bradbury. I've not read another writer who could distill black magic into words and horror into sentences the way he does to create images of the commonplace turned deadly or malevolent.

7. What should I wear to the award ceremony?

LU: Well since you are a severed head I think a nice new podium to prop yourself up on. Perhaps a 70s style cravat, that'd be pretty sweet.

AR: It might be a good idea for you to wear pants. If I win, I definitely need to buy some pants.

TI: I'm not your mother. Dress yourself please.

BS: Well, since you're only a head, I'd say your options are rather limited. But I'd go with either a pork-pie or a homburg, depending on if you're in a Popeye Doyle or Michael Corleone mood.

Thank you for all for participating. I'm jealous of the talent you all have. And I'm jealous of you, Terry Ingram, for having more hair than me! (Or any of the other nominees here! At least I'm not alone.)
A few images here come from 3rd party sites I forgot to bookmark. If any image is used without credit, please inform me and I will rectify the problem.
Posted by Max the drunken severed head at 2:23:00 AM

greetings!
i wanted to let you know you have received one of the first "ZOMBIE RABBIT" awards... please stop by and collect your award and please display it proudly on your site/blog.
and please give this out to four blog/sites you feel deserve it and tell them to do the same if you could... and if we are not careful there will be zombie rabbits everywhere...

Awesome! Thank you for the interview. I've got my filet of fish and fries ready to go, to cheer or drown my sorrows. Tough competition with these guys, and YOU!

Filet-O-Fish, Fries and Beer: Its not just for breakfast anymore!

Great multitasked interview! How do you manage it? Schitzophrenia?

I've never heard of any of these guys. Did you make them up?

iZombie-- Thanks! I'm so moved! Never has an undead bunny come into life, unless you count the time I spent Halloween at Hefner's mansion!*

John-- Your posts always make me want to eat! Thanks for the interview answers!

Aleata-- Nice to see you drop my 'umble blog! I need some class and beauty around this place.

Porfle-- Damn you! You always expose my secrets! I'll get you someday, you blackbipedal blackguard!