I'm excited that the venerable Famous Monsters of Filmland magazine (an influential part of my childhood) is being revived, and that the new editorial team of Jessie Lilley and Michael Heisler are at the helm. Editor Lilley, known for her work as the original publisher of Scarlet Street magazine and more lately for work with Mondo Cult, gave me a nice interview about classic FM and the FM that's coming. It follows the picture of her below--enjoy!

P.S. Here I thought "scintillating" had somethin' to do with smelling good. But no! Reader Yura Nidiot told me to look it up, and I find it means "giving off sparks" and "animated." (Well, that's Jessie, too!) Reminds me of a toy robot I once had... 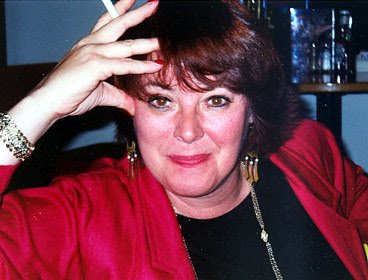 What's going to be fun about this for you?

Everything, though I think the most fun will be working with both Philip Kim and Michael Heisler. I’ve been doing this kind of work for 20 years now, first with Scarlet Street, then RetroVision, Worldly Remains and now Mondo Cult. Juggling Mondo Cult and Famous Monsters is a bit dicey, to be sure, but so far it’s working. I’m just glad our print schedule isn’t the same; I wouldn’t have time to sleep!

In Phil and Mike, I’ve found two people who are as excited as I am about working on the venerable Famous Monsters. Phil refers to himself as the New Caretaker of Famous Monsters of Filmland. I like that. It shows respect and humor at the same time. He knows what he’s gotten himself into and happily found the perfect Editor-In-Chief in Mike Heisler—another biting wit who keeps me on my toes and gives me enough rope to hang myself.

What is going to be the single biggest challenge or risk about it for you personally?

The most challenging part of this work is also the most exciting: keeping the name of Famous Monsters alive and true to its origins while bringing it into the current day in a way that will reach both the older readers of FM and the younger horror fans that may not yet be familiar with the magazine. The prospect of engaging those young minds, and teaching as well as entertaining them is daunting and exhilarating at the same time. I love monster kids, whatever their ages, and this puts me right into the thick of them. The risk? I’d think that was obvious; finding out I’m not up to the task. It’s the old story about the comedian who dreams that he walks out on stage to thunderous applause and laughter only to find that he’s forgotten to put on his pants.

I’m sitting in the Editor’s chair of Famous Monsters of Filmland, a magazine that is only a few months older than I. If you think about it, I’m Editor-In-Chief on a magazine [Mondo Cult] that unabashedly crows about its Castle of Frankenstein roots, while simultaneously being Editor at FMOF. These, for me, were the Big Two monster mags of the 60s. It’s a huge juggling act and the risk is only to my own ego. If anyone thinks I don’t worry about that, they haven’t been paying attention to me over the last two decades. No one wants to look ridiculous; but these worries only push me to perform at the top of my game so I can keep the chair and make my Uncle Forry proud. It’s a risk I’m delighted to take.

Name one genre film, new or old, you could write about endlessly and it would never get old.

That’s tough. On the one hand, there really is only so much one can say about a film, the story it tells and those who are telling the story. On the other hand, 52 years later this magazine is still telling new stories about films that have been around in some cases for a hundred years and been written about—endlessly. You’d think everything would have been said. In fact, as years go by and outlooks change, new insights can be gained from established work. These films reflect the changing times—I’ve found monster flicks of yore to represent the villains in real life that are oft times too hot to handle in the main stream. Not every one of them, by any means, but more than a handful fall into that category. The established villains of society are addressed directly in the monster movies, but they’re dressed up as wolf men, vampires, Freddy Kruger type characters and the rest.

Here in the 21st century, the gloves have come off and the rapists, murderers and other of society’s dregs are slammed head on in both film and television, not to mention the nightly news and CNN. Some of today’s horror flicks carry on the tradition, though much of the splatter and gore is something I find to simply be shock value, with no real meat to the story itself. This leaves only a small number of films under your “new” category that would qualify, if you will. A long answer to a short question, no? My point is, I can’t choose just one. I can write about the classic horror films endlessly and they never get old for me. Based on my current mindset, I would say if push came to shove and I had to make a choice, I would choose The Beast From 20,000 Fathoms. It’s rich in societal and political commentary from start to finish and one can take almost any line from the film and run with it.

Former editor Forry Ackerman was known for his enthusiasm and eccentricities. How do you compare with him in those terms?

Forry and I shared a love of music. I can’t count how many times I found myself singing the old songs from the turn of the last century and later, with him. Sometimes we even managed a half-assed harmony and though neither of us is a particularly good singer, we were always very enthusiastic. When I write, I like to have music playing. It can be anything from Bach to the Stones, Stewart, Michael Jackson, Mozart… whatever suits my mood at that moment. I’ve been told over the years that this is odd—all that noise is a distraction. Not so for me; music is a stabilizer that grounds and permits me to concentrate on the work at hand. I also find it difficult to work without a cat around. There are four of them that share our home at the moment, and their antics give me a much-needed break more often than not when I’m up against it with a deadline. A purring cat on my lap has the effect of breaking through a block or clarifying a thought. I don’t know if these habits are viewed as eccentricities, but they’re the first things that come to mind.

What themes of classic FM will continue on? Will the latest incarnation be aimed at an all ages audience like the Warren/Ackerman FM?

Do remember we’re not recreating the original; we’re carrying the name further into the 21st Century. If Michael puts some nostalgia into these pages now and again, I doubt anyone would complain, but this is 2010 and not 1962. Some of the things Warren Publishing did back in the day probably wouldn’t fly in this era.

As to the second part of your question, that's for Michael Heisler to answer, ultimately, but I’ll weigh in on it for the sake of clarity. If you’ve followed my work at all, you’ll know that I don’t believe in censorship of any kind so when I work on a book like Mondo Cult, the idea of watching one’s language is out the window. I’m of the opinion that the English language is limited enough without further hobbling a writer but telling him or her that there are words they’re not permitted to use because it might offend someone. That being said, this isn’t my book, so I will behave myself in polite company as my mother taught me to do. I expect Famous Monsters will be just fine for younger readers as it always has been in the past. The difference you’ll find will no doubt be a slightly more sophisticated prose over all. Just another part of being in the here and now, Max—the kids are far more sophisticated today than they were when you and I were growing up. Famous Monsters didn’t talk down to its audience in the 50s and 60s; it won’t talk down to its audience today.

Here's one I think may be a toughie. How do you translate the spirit of a magazine printed (mostly) before cable television choices and even before video cassettes into an age of a million choices and greater exposure?

You cover the subject—in this case, monsters—the same way, while adding space for DVD and Blu-Ray, video and computer games and whatever else comes along. FM did that early on with models and make-up kits and other merchandising—that’s all any of this things are; peripheral industries that grew up around the monster and that a lot of people enjoy. You may not have had prerecords in the 60s, but you certainly had television and there was always room for horror host coverage in the pages of Famous Monsters. Not tough at all in my opinion. Just know your subject and where you came from and the spirit will remain alive.

Jessie, how will being a woman editor for a magazine with a majority male audience make your approach different than a male editor?

I’ll give equal time to photos of good looking guys!

If I came to your house, what monster movie memorabilia or collectibles would you show me?

There isn’t much, you know? I’m not a collector. I guess I could show you my complete runs of Scarlet Street (the ones I published anyway), RetroVision, Worldly Remains and Mondo Cult. I have a couple of awards collecting dust around here that I’d probably show off as well. Other than that, the only thing of note that I have is a book full of autographed photos. I collected these over the years from the people I’ve interviewed and a couple of folks that I never interviewed but met or got to know since 1990. Oh! I have cartoons of me drawn by Gahan Wilson, Frank Dietz and Lance Tooks that I’m very fond of so I’d no doubt point those out. And of course, if they came out from under the bed, you’d see the cat collection as well.

Many thanks from one cat-owning, monster mag-loving classic horror fan to another, Jessie. 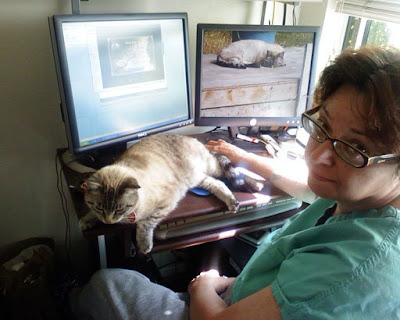 Above: Jessie Lilley and Frankie the Cat.
PHOTO BY: Lynda J. Williams
Posted by Max the drunken severed head at 1:06:00 AM

I cant wait til my next check so I can subscribe!!!!!

Fantastic interview! It's always good to see a strong female influence behind the hand of horror. Sounds like the re-animation of MF should make for a good read.