Vampira and James Dean trash-talk told in a WHISPER

How lucky is someone with generous friends! I'm super-lucky because I have so many, and one such pal is Fritz die Spinne. Fritz sent me just before Hexmas a great helliday gift--a scan of the cover story that scandal rag Whisper ran in its February 1956 issue. It's titled "James Dean's Black Madonna", and it's a trashy bit of rumor-mongering designed to make Vampira (actress/model Maila Nurmi), TV's first horror host, look supernaturally culpable for actor James Dean's death. It's apparently a lot of fiction laid on top of a few facts, such as the friendship that existed between James Dean and Maila (not "Myla" as the magazine spells it).

The scans shared here have apparently never been shared anywhere on the web before. (Fritz has sites of his own he could share them at, but he chooses to be kind to TDSH and all its readers; he's MAD, I tell you!)

If you're a lover of weird music (which of course you are)--do yourself a favor and keep an eye on Fritz' new Curse of the Hearse recording label website. Soon to feature releases that fans of post, Goth and deathrock music will die for! And for macabre model hobbyists, Fritz' Headless Hearseman site is a great place to buy resin model kits and custom nameplates. 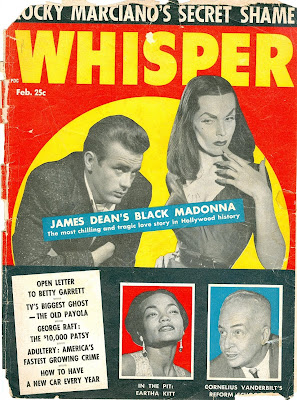 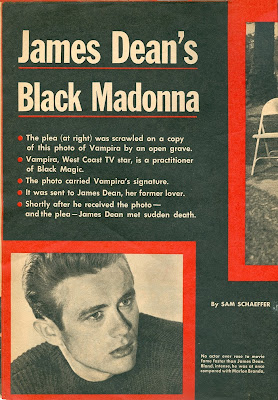 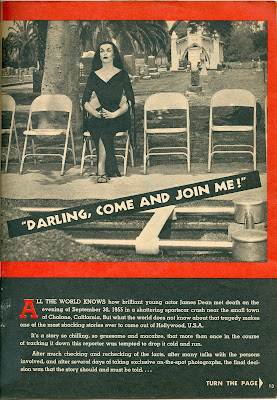 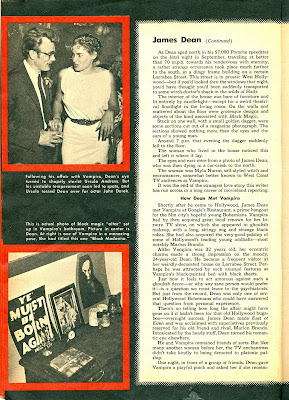 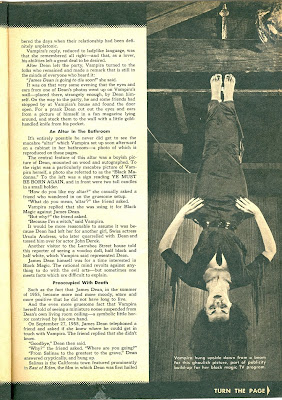 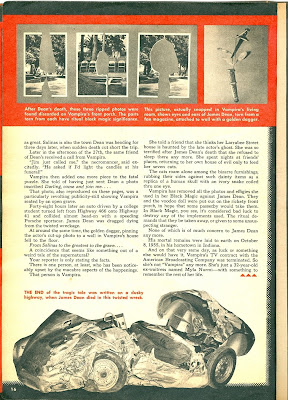 Here's Fritz' fixed-up image of the damaged cover, a thoughtful addition to all the cool scans he sent: 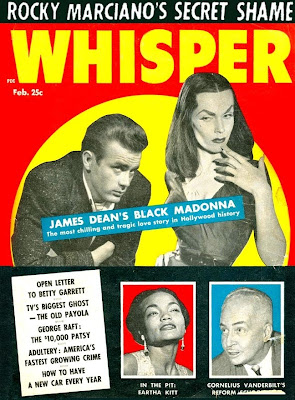 Thanks Max! Glad to get some of my oddities into better circulation with your great blog.

Thanks for all the links!

I'll see what else i may unearth as I get rid of more drek from under my rock.

that one pic of vampira upside down is so rad!

I have heard of a friendship between Maila and Dean before in David J. Skal's excellent piece of scholarship on the horror genre, THE MONSTER SHOW. Apparently, Dean had a bit of morbid streak and was obsessed with the suicide of his mother. He often spoke to Maila about his death and the manner in which he would die. They hung out fairly often right before he became a huge star (and before her show was canceled). I can't remember the exact falling out between them, if there was any.

Vampira also had a bit of relationship with Liberace and I have the video over at the Cavalcade to prove this exists.

I appreciate this Max. More and more great, good quality scans finding their way onto the net. I have so many I do not knwo where to begin, but I am finally finding the time to read some of the stuff I have collected it is great. May not be the same as holding real paper in your hands, but how in the world is that ever going to happen with something like this anyway.

This is my favorite post EVER!!!! Holy shit this is awesome! It makes my day =-D

I've been looking at newspaper ads for movie-theater spook shows in the late 1950s, and I'm intrigued by how many different spook shows promised a seance with James Dean or a ghostly manifestation of James Dean as part of the proceedings. Was it because he was such a hot-topic with the youth (the target demographic for spook-shows) or because he had this "occult" edge to his persona? I dunno...

Great stuff guy! Ever since I saw the character Vampira portrayed in "Ed Wood" I always wanted to know more. Thanks for the cool period magazine pages. Happy New Year.

Great article, thanx to Fritz, and The Head for sharing!!
Derograc

Hi Max, I have just awarded your wonderful blog with a 'You make me Scream' blog award.
Happy new year

To all of you--thanks for the comments! A HUGE "thank you" to Fritz for the scans.

Paul, as a fan of your blog, I'm flattered! Hope you're not telling me you like my blog best when other folks supply the material1 ;>)

Yes, I love this kind of weird vintage Hollywood trivia. I'd also heard about Dean and Vampira's friendship in Skal's The Monster Show. Great to see something from the actual time period about it...