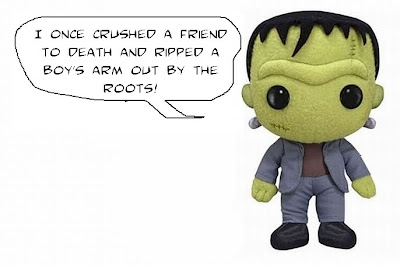 "What Do Cute Versions of Monsters Tell Us About Horror?"

That's the question a number of LOTTD (League of Tana Tea Drinkers) bloggers are considering this week. (The other talkers 'round the round table this time are TheoFantastique, The Groovy Age of Horror, Cinema Suicide, The Vault of Horror, Dr. Gangrene's Tales From the Lab, Monster Magazine World, Strange Kids Club and the estimable site Classic Horror. All great horror bloggers.)

The answer is...nothing. Nothing at all. But they do tell us something about ourselves.

Horror as a multi-media genre outgrows its icons like a snake that sheds its skin multiple times over the course of its life. And so, as Curt Purcell observes at his Groovy Age of Horror blog, "Cute, funny monsters are the endpoint of an instinctive and damn-near inexorable progression that begins the moment we're exposed to something frightening."

Curt sees this as an instinctive function of the most primitive part of ourselves. He (via quotes by zoologist Konrad Lorenz) likens it to the process by which a raven, exposed to a new object, instinctively avoids it, then observes it for some time, then examines and attacks it, and finally winds up by hiding the object, if small enough to be carried away. This is not unusual. A compelling but careful curiosity about strange (and potentially dangerous) items or creatures, leading to eventual disinterest when nothing harmful happens, is seen in many species.

But human beings take this further. We don't simply toss into history the monstrous characters that most frighten us, we make parody versions and juvenile versions--in that order--when the power of these characters lose their hold of the popular imagination. The "endpoint" is the juvenilization of the characters until they are forgotten, at which point a "rebirth" of that character is possible.
From this... 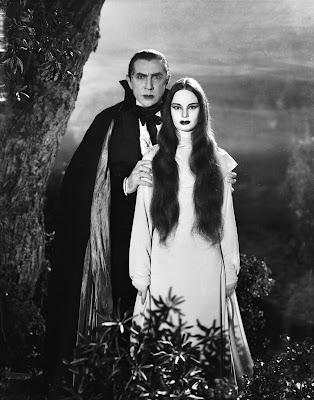 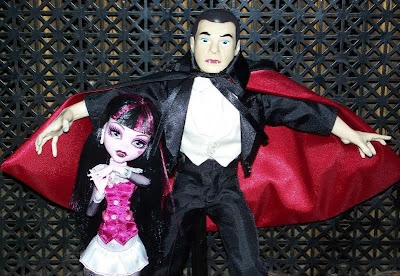 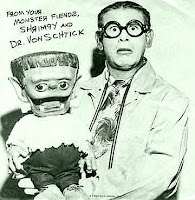 The flat-headed Frankenstein Monster with neck electrodes, so astonishing a film image in 1931, was being lampooned and made safe for family audiences and kids' matinees by the 1940s. The regression and weakening proceeded apace each decade. From Frankenstein in '31 to Abbott and Costello Meet Frankenstein in '48 to I Was a Teenage Frankenstein in '57 to lovable Shrimpenstein in 1966.
This juvenilization is not unlike what happens to human beings, where individuals may live long enough to become weakened, and as dependent and powerless as children.

My favorite monsters--the classic Universal film versions of Frankenstein's Monster, Dracula, and the Wolf Man-- are in such a state now.

How does society sell things that have been around a while, whether those things are tangible goods or ideas? By "reinventing" or "re-imagining" them. By saying "This ain't your father's [fill in the blank]." With horror, it also seems a sort of cultural Oedipal complex--men wanting to symbolically kill their forefathers in fright. Interest in horror, though appealing to more and more females (thank the dark gods!), is still a genre that involves men-- both as artists and audience-- more than women. Perhaps it is a sort of cultural Oedipal complex.

Each generation wanting to have its own cultural style and interests, its own myths and monsters, has been a fact of social life for eons. But in the past, a more deeply ingrained interest in the "classics" and the lore and iconography one's heritage was the norm. Now, with instant communication allowing what is "new" to be redefined every day, and with so very many "new" media artifacts to inform, entertain or distract us available, who has time for "old" things except the old? In modern cultural chronology,, a "generation" is no more than a few years. Nightmares of the past are merely food for the worms of nostalgia today. 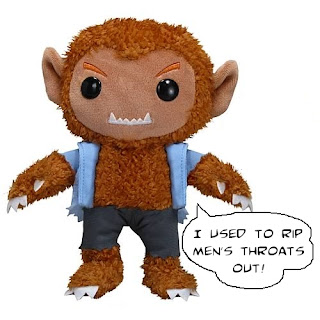 But it's not just limited to horror icons from as far back as the 1930s and '40s of course. A Nightmare on Elm Street was remade last year, and while it had the power to create shock and suspense, it had no power to create a splash in the pool of popular opinion. Came and went and left little buzz behind it. 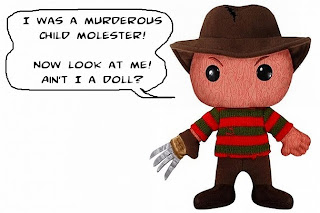 A form of entertainment neoteny is evident as well. Neoteny, just in case you aren't a scientist or a person with perfect recall of your high school biology lectures, is a process in developmental biology where the adults of a species retains traits seen before only in juveniles of the species. In evolution, the neotenous form can become the norm; an example is the continuance of gills throughout life in some salamanders. With monsters (and other characters in pop culture) new "baby" versions of old characters appear, with heads and eyes disproportionately larger in size. Such infant proportions and smoother, simpler faces (read blander) are the hallmarks of a "cute" monster. You see it every Halloween in toys and decor for the season.

But I thank Cthulhu everyday I can still sense the uncanny even in monsters no longer widely feared. I joyful that I am still susceptible to the now-subtle otherworldly vibe from monsters, mutants, and mutilated madmen in old films, old books, and comics. I celebrate the occasional well-crafted contemporary attempts to squeeze a few more scares from the ancient goblins.

They live until their fans are all gone...and then they wait, like King Tut's cursed tomb, to be re-discovered in all their weird power by people (and who knows--perhaps androids?) yet to live.
Posted by Max the drunken severed head at 4:54:00 PM

As much as I hate to admit it, I think these little plush monsters are adorable and I actually own a couple of the "Monster High" dolls. *hangs head in shame* I chalk it up to being a pop culture junkie and also to being deprived of horror as a kid. I'm probably indulging my demented inner child (who totally loves this stuff). :D I find this series of posts fascinating and I'm really enjoying reading all the responses from the LOTTD members.

No shame, nothing to feel guilty about. ;-) Dolls are totemic, and I'm sure you are able to attune yourself to what charms old horror icons still has to offer. So the cute versions you have of the once frightening kings and queens of monsterdom are just another representation, and not a put down of them.

"Each generation wanting to have its own cultural style and interests, its own myths and monsters..." An excellent insight, Max!

This is actually my first encounter with Shrimpenstein *gasp* but he looks like an excellent pint-sized conrade, haha. Thanks for the tip. :)

Strange Kid--Glad to point you to a discovery of Shrimpenstein. (There were 2 links posted for Shrimpy--hope you cheecked them both out.)

Gene Moss, who played Dr. Von Schtick, was a funny writer and performer. You can find mp3 copies of his great '60s novelty LP, "Dracula's Greatest Hits" by poking around on the web for it. (It's not on CD, alas.) Recommended!

One of the best written (thoughtful, perceptive) posts I've read on this interesting topic; and great use of pictures to illustrate your points! I was edified.
r/e

FWIW, I think that the failure of the new NOES film came about because the producers deep-sixed the comic aspect of Freddy that helped audiences watch his adventures w/o being reminded constantly how terrible the real thing behind the monster was.

As bad as Freddy's one-liners became, they did allow for some humorous relief, much as one gets from cute-ified monsters.