Filmmaker Ted Newsom may wind up with an award given in the "classic horror" community, the Rondo, for his part in helping this forgotten horror star Laszlo Revik, come to light! I certainly hope so. I'm excited to be part of this!

I can't believe he's making time for this, but I don't think the man sleeps. He wrote me this past weekend, "I thought I’d drop you a line and let you know what’s going on. Work progresses on the scripts Brinke Stevens and I are writing, first the thriller set in Canada, then we’ll move on to either the Sinbad project or her weird experience with Federico Fellini in the 1980s. Happy Halloween, btw." But to get back to what he's been telling me about the Laszlo Revik films, here is another part of the news I was sent:

Oh, and Max, you really gotta see the trailer for HOUSE OF DR. GHOUL. I’d burn a copy for you if I could, but Sam won’t let any material out, and burning discs is beyond my superpowers anyway. This was Universal’s ’46 follow-up to HOUSE OF DRACULA, which personally I’ve always seen as a sputter, but based on the trailer, THIS would’ve been the way to wrap it up big-time. Dr. Ghoul, Dracula, the Wolf Man, the Mummy. The old Hans Salter music is used in the trailer, and it’s like the sensation of watching home movies shot on a set of a film you know by heart, like you’re seeing something special and secret experienced only those who were actually there.

Stop the presses! What about the rights? After this message, I asked Ted how the hell a character and an actor move upward together from lowly PRC studios to bigger, more prestigious Universal during the 1940s? Was the whole thing an elaborate scam being played on "Sam Lee", or did Ted get the order of Revik's studio move wrong? But no, Revik did move from PRC to Universal, and Ted has this hypothesis:

Funny you should ask about the rights issue, Max. The way I figure on the basis of what is known, Revik himself created the Joseph Elwin/Dr. Ghoul character and was sensible enough to personally hold onto the rights. He was a lawyer, remember, and no dummy. Since the character appears in over films between 1943 and 1970, all for different companies, I'd guess it's something like Paul Naschy's hold on the Waldemar Daninski role. Clearly, he had some long-term plan in mind.

Getting back to what Ted had seen at this point:

The trailer opens with Joseph Elwin and this ‘40s babe, tied to a tree, nighttime. He tells her she “shall be the bride of blood, the mother of a race of monsters”—and points to the fiends that are all approaching out of the night, the Monster, the Mummy, the werewolf, Dracula (Lugosi! Who’da thunk it in 1946?). It’s clear what he has in mind for the girl, and it ain’t wholesome. There’s this quick shadowy transformation on him—one of those red-filter things like March in DR. JEKYLL or Barbara Steele in BLACK SUNDAY, creepy—and his face becomes this skull-like visage of Dr. Ghoul (It’s slightly different from the PRC version). He touches her bare shoulder, there’s this repulsive HISS and the girl screams—I mean, really SCREAMS—and he leaves a hand-shaped burn mark. And pow, into the splash titles.

“Unwholesome” is my impression, based on what little I’ve seen. I mean, heck, the Univeral stuff is all kind of cuddly and familiar, know what I mean? But the first movie and this trailer—there’s a mean streak here, whatever it is. Something in the dialogue, something about Laszlo Revik himself, maybe a little hint of watching something “forbidden” and hidden all these years. I’m not at all sure I “like” this stuff.

And then there’s the expected payoff—Universal sold off the movie to PRC when they dumped THE BRUTE MAN and got out of horror and B-pictures—but they never transferred the rights to the monster characters. End game on HOUSE OF DR. GHOUL: stuck in a film vault for 60 years, like the previous film. It would be funny if the films themselves weren’t so appealingly nasty. Like I said—unwholesome.

So, Sam Lee and Jeff are shooting a video documentary to explain who Laszlo Revik was—since there’s about 12 people in the entire world who know. Interviews, etc. I’ll fill in more tomorrow. Like I said, there’s a script in all of this, somewhere. 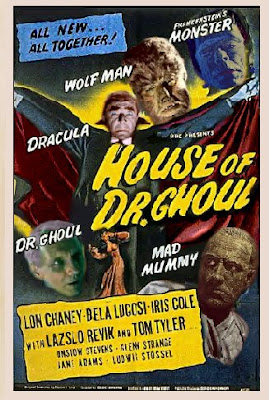