Ted finally did see some of the Lazslo Revik films. The first one, ALIAS DR. GHOUL, he says "is a pip". I asked him to please let me run more of his e-mails to me. But I hafta be up front for genteel readers: if you see his posts at The Classic Horror Film Board (it's in the link section), you know he kinda tends to let it all hang out and doesn't always spare the piss and vinegar. (That's why I like him so. )

Here's excerpts of what he wrote me, here by permission of the author:

My writing partner’s out of town doing a convention back east, so I’m prepping to finish the sound editing on the updated Hammer documentary. It looks SO much better now, and SOUNDS so much better. Don’t know if you’ve seen the recent dvd of SPIDER BABY. Great print, and a nice little doc’ extra on Ronald Stein, with yours truly featured in interviews along with Jack Hill, Harlene Stein, Joe Dante. Young guy named Elijah Drenner made it, great job. You’d think with all this, I might come to mind if someone had a horror documentary to make, right? Well, I THOUGHT I had a paying gig lined up with "Sam Lee"—I mentioned him last time. And naturally, with no experience in doing clip shows, he decided to produce the project himself. "Sam"’s running true to form.

The deal he’s got has me scratching my head. Either he’s the luckiest sumbitch in the western world or—I don’t know. He got those unseen Laszlo Revik monster movies for a dollar apiece?? Thirteen blinking dollars, and he’s got all the rights—dvd, cable, everything. It wasn’t that Sam’s such a canny negotiator (frankly, he’s a putz). This lawyer called from Vienna or someplace and offered them. It's time for them to be seen, the guy told Sam. Unbelievable. And just on the basis of the clips this foreign guy had sent, Sam’s in the chips already, at least on paper. He partnered up with some sleazebag distributor named [name deleted] who promised him the Moon and all the Selenites who live inside it [and he's] going to rep’ the pictures. That’s a marriage made in heaven. Sam’s like a horse with blinders...

I got to take a look at the screener, though, and the Revik stuff is fascinating. It’s all over the map, genre-wise, a little bit of almost everything, in a really unsettling way. And apparently we’re going to have to do some re-writing of the film history books. We ALL seemed to have missed a few things.

Laszlo Revik came out of nowhere in about 1942 or ’43, at least regarding the movies we appreciate. Well, not nowhere, but Europe. Jeff Richards keeps finding conflicting information on the guy’s year of birth, but at least everybody agrees he died in 1975. He was presumably a Czech, relocated in the late ‘20s, in the BLUE ANGEL /CABARET era, licentiousness, wide-open Berlin, the whole shebang. Hotcha. Jeff cross-referenced some things and guesses it may’ve been a political thing, fleeing from the Nazis, or even further back (c. 1937 or so), when Revik worked in the Vatican archives. He was a priest and a lawyer (best, or worst, of two worlds, I’d say). Jeff found an obscure news article from the Mussolini era about missing books from the Church archives, which was—you guessed it—1937. The article is cagey, but the missing books may’ve been medieval grimoires, books about alchemy. Anyway, he plunked down in Germany until he came to the States in ’43.

Sam Lee got the films—cans and cans full of stuff—and again, the blessed bastard is leading a charmed life: the mystery lawyer in Europe paid for shipping. (I wish I had a rich relative who was as generous as that.) Sam’s apartment is starting to smell a little like vinegar. A couple of the prints are decomposing, getting “vinegar syndrome,” which happens over time. It means the film itself will rot, shrink. Bizarre little thing: they’re all on nitrate stock, even movies shot much later, like the 1950s and ‘60s. Most everyone in the world converted to safety film in the early fifties. Nitrate is highly combustible, as you know. There’s so many odd little things in this affair.

So anyway, the first movie introduces this character that Revik would do again and again, Joseph Elwin, alias "Dr. Ghoul". (The title is ALIAS DR. GHOUL-- what else?) It’s a contemporary story (for 1943), semi-cheaply done—think THE MAD MONSTER, KING OF THE ZOMBIES—but it’s got George Zucco as the Van Helsing professor type-- and Dwight Frye as the henchman. (So much for the reference books.)

[Score one for the drunken severed head! When I saw the name "Elwin" and the names Zucco and Frye, I realized the studio probably made it back-to-back with DEAD MEN WALK, another PRC film with Zucco and Frye, and one where Zucco played a "Dr. Elwyn Clayton". Ted didn't see the connection, but the DSH did!]

Joseph Elwin is a sinister alchemist of indeterminate age, in league with the bad guys—Cthulu, Satan, Set, whatever you want to call it. He’s hot for the girl, of course (Louise Currie, in this case) and double-crosses everybody, after promising them their heart’s desire. It’s like an old Stan Lee horror comic I read when I was a kid, where malignant genie grants one wish to the “lucky” guy—but twists it around so the guy gets screwed. Jeff tells me that’s a theme throughout these films. Maybe it’s coincidence, maybe not.

It’s black and white, of course, surprisingly moody. Revik—eew. Kinda like a tall, gaunt Martin Kosleck. He uses hypnosis, and there’s one shot where he’s staring directly into camera, this giant close-up of his eyes, and Max, I promise you, I started feeling like I was being sucked into the film. This oily, dead-calm voice and a cold reptilian stare. The only person I can compare him to is Henry Daniell as Moriarty in WOMAN IN GREEN. I actually dreamt about him last night. That’ll teach me not to stay up late.

It was made by the usual PRC gang, but the screenplay was credited to someone I’d never heard of, and naturally not on IMDb. Jeff and I think it was probably Revik himself. And in the end, what happens? Some sort of legal trouble, and PRC shelved the film, poof. Apparently when they went belly-up in the late 40s, somebody forgot entirely about it and it vanished into never-never land. Until now. 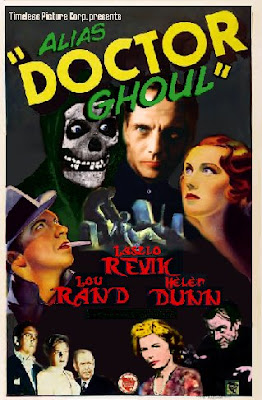 It was found by Pierre of the "Frankensteinia" blog, and sent to me TODAY. Thanks, Pierre!