DSH readers, I know that I'm taking you for a long ride sharing the e-mail I've been getting about the Laszlo Revik films discovered in Europe, but this news of former lost horror movies fascinates me. I've gotten mail and attached photos faster than I can post, but am almost all caught up with what filmmaker Ted Newsom tells me about what he has seen and what he's discovered. Here's Ted:

I watched a couple minutes of HOUSE OF DR. GHOUL, and there’s a darkness to it that I don’t understand. Almost like if SON OF DRACULA was about a child molester instead of a vampire. I dunno. It’s got all the elements, and monsters galore, but there really is a nasty feeling to it. Revik is his same character, Joseph Elwin, who’s basically the Niemann/Edleman pivot of the plot. Dovetailing with HOUSE OF DRACULA, he brings Talbot back and wills him to become the werewolf again. Joseph Elwin (Alias Dr. Ghoul, of course) promises that he’ll lift the curse if Talbot does a couple of itty-biddy favors (He’s got his fingers crossed, natch.) The werewolf murders are REALLY strong stuff this time out, brutal. You know the scene in PEARL OF DEATH where the Creeper confronts Sherlock Holmes? THAT kind of scary. Universal was nuts to drop this. There’s a trial scene in which Laszlo Revik is “defending” Lon Chaney, and just sells the old boy down the river. Talbot’s cured of his lycanthropy—Elwin kept that part of his promise—but now Talbot’s going to be executed for the murders, because, of course, no one believes the “werewolf nonsense.” There’s an edge to Chaney in this, too, not just whining—he’s mean. Hey, what’s odd is, Lazslo Revik was a lawyer in real life. I don’t know whether Revik had input into the scripts or not, but there’s this funky autobiographical thing that keeps cropping up.

I gotta tell ya this—I had a sexy dream about Martine Beswick last night. I saw her at an autograph show last week and we chatted (had not seen her since she moved to England, and she reminded me that was like 8 years ago.) So we’re cuddling in the dream, and she looked off at some schmoe and said, “He was hitting on me,” and laughed. Dreams are fun things sometimes (!) and weird, other times. Who knows where this stuff comes from. I shared this with Sam Lee—who’s becoming a little more than monomaniacal about the Revik films. He said Revik appeared to him in a dream. Well, sure, what do you expect when you go to sleep with the dvd player on? Sam said Revik promised him anything and everything he wanted – all he had to do was obey.

He arranged to start transferring all the negatives and the nitrate prints to tape, and mostly they look fantastic. Like I said, there’s thirteen, all genre stuff one way or the other, with one semi-exception, a noir thriller called CONDEMNED where Revik is a genius criminal who’s been locked away for years. He gets out and plans this gigantic heist of silver bullion, determined to make his mark and get back at the guys who sent him up. The insane thing is, this never got released either. It’s a later film, 1954, I think, in the mold of Phil Karlson. Good cast: Edmund O’Brian as the cop, Elisha Cook, etc. Even in a 50s suit and tie, Revik makes a believable psychopath.

Sam and Jeff started shooting their video interviews, and the director of a sci-fi thing called ATOM-AGE ZOMBIES told them Revik had written the original story, though he declined 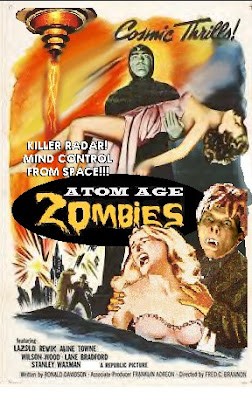 credit (I figured this might be the case with his movies). Didn’t have much to say about Revik himself (not much to remember in a two week shoot). Revik is a Vornoff-type renegade scientist who develops a microwave thought-control satellite, planning to blanket the world. The Ruskies have backed him on the deal (hey, it was the 50’s, they were behind everything bad back then) but true to form, Revik screws them—kills the commie general by will power as Revik conjures some Lovecraftian powers—and transforms into his evil alter-ego. The Dr. Ghoul make-up’s a little different from the earlier films, even better, I think.

In his video interview, the old director got a kick out of the prescient use of stuff that didn’t exist when they made the film—satellites, microwaves, thought control. It’s almost like Revik saw these things coming and was waiting for the world to catch up with him. And the old luck hit again—the film sat on a shelf for a year until RKO picked it up in 1956, and they went bust in ’57, and poof again, down the film vault rabbit hole.

Jeff told me Sam’s got good news and bad news. There’s a cable deal pending for the batch of movies, which is good (for Jeff, anyway, because he might actually get paid for all this research he’s doing), but the bad news is, some Euro-babe, Lorette, showed up at Sam’s place with some paperwork—all in German—saying she represented the estate of Laszlo Revik and she owned the films. That, and she doesn’t want them shown. Ever. Anywhere. Sam tried to sweet-talk her, and while he was preoccupied, she apparently tried to light one of the films on fire. Well, nitrate film would’ve go up like a Roman candle. Again, some stuff makes sense, and other things don’t add up at all-- yet.

They did find some key art on the films, from your old friend Steven, the collector. The poster with Revik and Lugosi didn’t have a copyright date on it. That was DR. GHOUL MEETS THE VAMPIRE, the kind of film nobody could even give away in 1950. (Had this been made ten years early, a Cinecolor horror film with a mad doctor and a vampire—or five or six years later-- well, maybe things would’ve been different.) 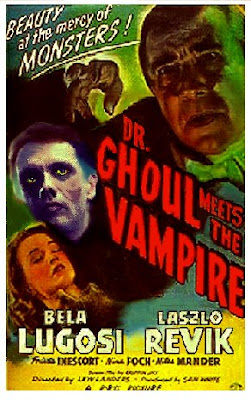 The lack of proper notice on the poster struck me as very peculiar. It’s standard operating procedure to put “©1950 Whatever Productions” on anything. Otherwise, you’re basically just giving it to the world, with no exclusivity “Take me, duplicate me into infinity, show me anywhere.”. You’d think Revik—a lawyer—would have had some sense about that. Curiouser and curiouser.

Sam Lee’s oblivious to it all. He’s just got his eyes on the money he’s planning to make. I ran into him in a telecine bay in Burbank where he was transferring some stuff. His faded Levis have been replaced with khaki Dockers, and he traded up from a clunker Toyota to a Lexus convertible. Even if his ship hasn’t come in yet, he’s behaving like it has.

Jeff came up with some other stuff, too—not revelatory, but another layer of weridness. Remember I told you Laszlo Revik left Germany in the 40s? Well, he split the US in 1957 just as abruptly, but in neither case does it appear to be a political thing. He did this snarky color horror movie for that little creep Allen Gordon, DEMONS OF SODOM, which Gordon always swore never really existed, just a press agent’s brain-fart. Gordon always claimed INSECT INVADERS was his official “first” (like anyone with any sense would be proud of back-projected caterpillars and cockroaches. Well, if you read that Tom Weaver interview with Gordon, he also claimed STAR TREK stole all his ideas from that awful VOYAGE TO THE LOST PLANETS. Yeah, right, and Leonard Nimoy copied Hans Conreid’s performance in it, too. Sheesh.)

There appears to have been mucho bad blood between the vile little Gordon and the equally vile Lazslo Revik. The producer apparently thought Revik was a perv of the first order. There were stories of nasty things in Revik’s house, rumors of young would-be stars showing up in Hollywood and never being heard from again. Fill in the blanks—orgies? Satanic rituals? Who knows! Nobody ever proved anything, but people knew. In any case, Gordon believed the stories, and he loathed Revik like you hate a toothache.

Jeff found a bunch of seemingly unrelated news items and he and Sam talked to the producer yesterday. Gordon started repeating the usual b.s. “I was youngest producer in Hollywood” story, and Jeff laid the facts on him: that there had been a lawsuit, that Revik skipped the country, Gordon won by default and confiscated Revik’s house in the Hollywood hills—and the house burned down a couple weeks later. And that DEMONS OF SODOM was a real movie. 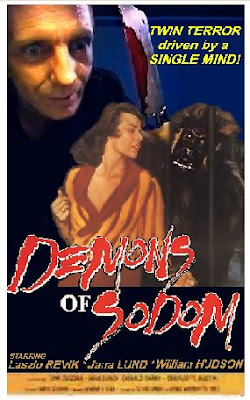 Gordon told them—quite proudly—that, yes, he finked to HUAC and named Revik as a Commie. It wasn’t true, but it was enough to put some heat on Revik—AND intentionally throw the movie into limbo. Gordon actually burnt the negative. The working title was HORROR OF THE BEAST, an ugly pun on the word “horror,” since the story involved a gorilla under Revik’s mind-control which he planned to use to create a race of monsters the old-fashioned way (think about the sexual ickyness in the 1932 MURDERS IN THE RUE MORGUE—that sort of stuff, only in glorious EastmanColor.) And the title was Revik’s idea. This guy is seeming more twisted all the time.

When Sam told Gordon he had the only surviving print, Gordon went pale, then flew into a goddamn fit. He threatened to sue Sam and ram him into the ground like he did Revik. Needless to say, the boys didn’t get around to making a videotaped interview. He booted their asses out.

So our pal Sam Lee has visions of a rich future and money to burn—except that there’s one old crabby bastard who wants to sue his butt, AND some sultry chick from Europe who says she owns everything Sam is trying to sell. I’m not sure how this will all shake down, but I’m taking notes. This Revik was the Charles Foster Kane of obscure horror actors—and apparently the one of the bunch who was actually worse off-screen than in the movies.