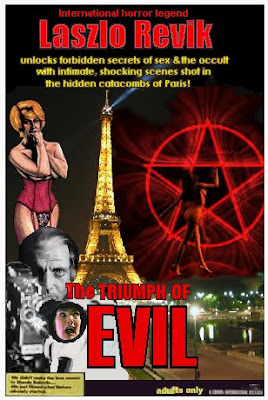 Above: a recently found poster for a later Revik movie, THE TRIUMPH OF EVIL.

Good news: Ted Newsom is safe in fiery L.A. Says he: "Relax if you’re worried about me being consumed in the fires here in CA. So far, the nearest is 10 miles away. Monday, at mid-afternoon the sky was as dark as the moment before sunset."

More good news: I'm getting e-mail about Laszlo Revik from several readers AND I've gotten sent a transcript of part of a Laszlo Revik film script! (More on that below.) First, some comments from a friend of the DSH, Gary D. in Canada.

He sent me an e-mail asking about this odd case of Laszlo Revik. Here's some of what he had to say:

"I gotta say fascinating, but something seems so VERY wrong here. OK A Czech horror actor doing foreign horror films who was lost and forgotten I can certainly believe, in fact it's quite plausible, especially with the way out there horror that a lot of the European countries produced. Very much a la Mojica Marins. ...IF it's true it's a miracle."

I admit it sounds miraculous.

"Not only that, they RENT the rights for the title character whom has never appeared before on any released film, despite the fact they OWN the rights to horrors most recognized movie monsters, names that the public knew unquestioningly and would be drawn to. Why do you thing the house movies used Frankenstein and Dracula? This doesn't sound like the Universal International I know."

I forwarded to Ted Newsom Gary's comments. His response to the above paragraph:

Mix n match, I suppose. The Edleman character in HOUSE OF D seems pretty much like a riff on Jekyll & Hyde, which would put them in a huffing contest with MGM (like the to-do over Lugosi in RETURN OF THE VAMPIRE); Daniel in HOUSE OF F clearly is cut from the same cloth as Quasimodo, which might've p.o.'d RKO. Maybe, like Samuel Goldwyn & the [intention to use Karloff as the Monster] in WALTER MITTY, there was some sort of sidebar agreement. More likely, if Revik held the rights to his own creation, he simply signed off for the film.

Gary D.: "And how bizzare that he worked with all these horror genre greats, and yet NONE of these pictures made it to the big screen, nor produced a mysterious still or even passing mention, and not one dedicated horror fan ever knew these pictures existed. Gee what are the odds."

It is becoming more bizarre as I learn more about it. Jeff Richards and I are starting to think it was all intentional, planned, or co-opted along the way-- that they weren't meant to be seen at the time they were made. It doesn't make much sense to me-- yet. More about that later. We've tried to explain this to Sam Lee, and he won't return my calls and keeps avoiding Jeff.

ALSO-- TDSH reader Pierre, curator of the site Frankensteinia, wrote me to say that he saw a cut-down Revik film (apparently) re-titled "“La maison des goules” (The House of Ghouls), and stated "I never forgot Revik’s assistant, Valeri Votosh as “Strega”, the vampire girl. I always thought of her as the template for Vampira."

Forwarding this Ted, he responded

Could be, I dunno. OK, this might be like people "remembering" a gorier HORROR OF DRACULA in Canada (which I've always suspected was memory being playful). But since Revik played essentially the same character in a number of films and looked similar from movie to movie, I guess it's possible they did a number like Richard Gordon planned to do with Lugosi's MOTHER RILEY footage, or like Al Adamson later did with almost everything, construct the shows around the existing footage. And who knew about 13 DEMON STREET at the time it was made? These things show up at the damnedest times-- when the world is ready for them, maybe.

More of Ted's e-mail to me:

Maxie, I got to see a bit of CASTLE OF FRANKENSTEIN the other day when they were doing the transfer and color correction-- I'll write more later, because I actually met the babe who says she represents the estate, Lorette Edleman. She was there to insist to Sam she owned everything. I was reminded of the line in M*A*S*H*, "Bring me the sultry bitch, the one with the fire in her eye." Wow. She looks a bit like Brinke Stevens, which I appreciated. Anyway, she had a copy of the shooting script, pretty much shot for shot, line for line. I managed to Xerox a couple pages and scan it to give you an idea. It's Mary Shelley-- sorta. But like all of Revik's stuff, there's a sexual angle that's discomforting. And the Joseph Elwin character offers Karloff (the old baron) a deal he can't refuse... in exchange for one little favor. (Boy, some people never learn!) Lorette seemed fascinated by Revik while she was watching the clip, which looked as crisp as one of the early Corman Poe's; Spanish production, probably shot about the time Karloff was doing the I SPY episode. She was staring at the screen as this scene (attached) was playing, and I heard her say, "I've never even heard his voice." Odd thing to say.

BTW, the colorist at the lab—the guy who tweaks the correction controls to make everything pretty—is Zeke the Geek, who worked for me when I re-transferred the old Hammer trailers. I always want to use the line, “Mm, what is that unusual cologne you’re wearing? Roadkill?” but he’s OK. He says there’s an internet buzz about the Revik stuff. His fellow geeks in black T-shirts are frothing for a glimpse at an honest-to-Shai-Tahn devil-worshipping alchemist. Great role model. Revik makes Marilyn Manson look like a choirboy. Call me old-fashioned, but when “kids” think Manson (Marilyn or Charlie, pick one) is cool, my hackles raise. Something rotten in Denmark, or Burbank. Actually, if the cable & dvd deal comes through for Sam Lee, all over the world. Eeeuuuw. And it does look like it’s happening. That sleazepot distributor, [name deleted], got into a major company and they’re talking serious dough. I’d be astounded if Jeff or Sam see anything out of it. I’ve dealt with the cable exec myself, who’s a dish. I’ll call her Faye (in deference to NETWORK—though she’s younger and nicer than Dunaway) She used to be at Nickelodeon and always struck me as pretty conservative and responsible. I don’t know what she’d see in these movies. Her little aide de camp, though, is a smarmy sycophant straight out of THE PLAYER. He and Hensley probably see eye to eye. On the 70s poster you found—FRIGHTMARE FREAK-OUT—that may seem like a riff on Manson, but to me it’s more of that weird autobiographical Revik stuff, dredging up the rumors that surrounded him in the 50s when he split the country. He’s usually in this green robe (the Dr. Ghoul character apparently always wore green, even in the b/w films), and surrounded by wide-eyed young babes (and guys. Hmm.) who are mesmerized by him. Looks like it was shot on 16mm and blown up. It’s got this one creepy intimate scene where “Father Elwin” is caressing this nubile chick (gross, since he’s 60 or older), promising eternal life, with her lying topless under the light of the Moon—some metaphysical dialogue about the light transforming the silver of his dagger. She acts turned-on and scared, as if she’s about to give up her virginity. There is this wicked close-up as gentle old Father Revik slides his thin silver blade into her throat and blood spurts out—and he slowly just keeps pushing it further and further in until the hilt is right against the flesh of her neck. The worst part—or best—is that she STILL has that look of sexual anticipation as she’s dying. A really subtle lighting effect and surprisingly good acting pays the scene off as the life gradually leaves her face and eyes, and Revik’s face seems to glow and absorb it. Gawd. This is not the sort of stuff I’d want kids to see.

This Revik makes Lionel Atwill (a horror star of the 30s and 40s who was busted for throwing sex parties) sound like a Boy Scout!

Here are links to Ted's scans of pages 17 and 18 from the script of CASTLE OF FRANKENSTEIN (click again when you reach the link to enlarge the text):

For a guy who has lived in Ohio or New York City all of his life, you certainly have an unusual accent!

Ever had a head injury? (Say...Since I've never MET you but have only talked to you on the phone, MAYBE you're a severed head too!)

Craig-- Sorry your earlier comment didn't show up, but there is a season for everything under the sun. Things appear when they are meant to.

Or full moon, as the case may be.

Did you see the news item on Revik's producer Allen Gordon? He was murdered.