That's right-- I tied one on with a king! Larry King, to be precise!

Yup, last week the suspender-wearin' schmoozer of CNN raised a few with yours truly...and lived to regret it!

You see, I know a staff member on King's show, and she got me onto King's set. Smuggled me into the place in an oversize Louis Vuitton bag! (I love traveling in style.) Anyway, she plopped me down in front of Meister of Meandering, because he adores novelty items and practical jokes, and she'd sized me up as a living combination of the two.

When King saw me, he gasped. Then he laughed. And laughed some more.

I told him about myself, and my campaign for President, and he laughed even harder. Then he pushed a button and his desk became a bar! We proceeded to get toasted on brewskis. Man, can he put it away! But he kept asking me where the booze I downed went to. "Hackensack," I told him, and that made him roar.

Unfortunately, he got "playful." He started to roll me around on his desk, (while making train noises), then he put little flags in my hair. After a fit of the giggles, he turned to the camera (which was on, but not "live"). Then, IT HAPPENED. He endorsed me for President. (He twice had to make a go at it since he couldn't stop giggling.)

But what King now regrets (now that he's sober) is that I got a photo of his rash remark! It was taken from the monitor, and includes an automatically-generated subtitle for the hearing-impaired. Here's the picture: 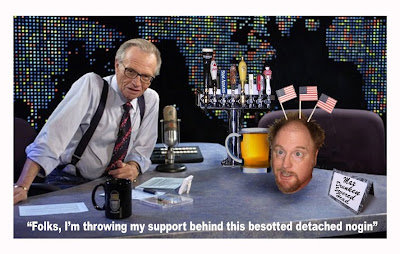 That's no misspelling above. He was so faced that he actually called me a "nogin," (rhyming with "slogan") rather than a "noggin," which is what he meant. That gave me a fit of the giggles!

Of course, King was done taping for the day, and so was off his guard, (read "plastered"), and that's how I was able to get a crew member to supply me with the picture. But when King found out later that I'd left the studio with a photo, was he mad! His lawyer, Sue Yurpantsov, sent me a nasty letter, implying all kinds of legal consequences if I talk about what happened, or show the picture. But tough. Larry King, if only for a few moments, endorsed ME for President!

My thanks to Richard Olson for taking me to King's studio.

And it puts me one step aHEAD in the journey to the White House!
Posted by Max the drunken severed head at 1:42:00 AM