You deserve the best-- but that person isn't running!

I am humbly announcing my candidacy for President of the United States.

Are you frustrated by the few choices we have in candidates to vote for?

Do you want someone who will go to members of Congress and get right in their faces?

Then I'm the write-in candidate for you!

The two main candidates are BOTH politicians in Washington. Let's start fresh-- as my grandfather always used to say, "Politicians and diapers need to be changed for the same reason."

If you want REAL change, then WHAT could be more different from the same-ol' same-o than electing a drunken severed head!!?

Not that I am a complete unknown. I was approached to be a candidate by the Pity Party (they tried to shame me into joining them), the Disinterested Third Party (because a third of the country is disinterested), the (Robert) Bloch Party, the Coming Out Party (never did figure out why lesbian debutantes would want me), and the Birthday Party (for nudists-- they always wear their birthday suits.) I seriously considered being the nominee for both the Cocktail Party and the Halloween Party.

But ultimately, I declined to be beholden to no one group, and not to commit to any platform other than the one my neck rests on.

I am a Party of One. And I say, "One nation, one bar tab, with liquor and just ice for all!"

My friends, I believe in socialized drinking! (The more socializing, the better-- never drink alone, I always say!) Join me, and let the good times roll!

I ask for your support. (Especially after my third drink in an evening-- I tend to tip over.)

What, you don't believe anyone could take my candidacy seriously? I don't blame you! But here's the proof that talk of a DSH campaign is getting serious attention:

So, I ask you to add to the Drunken Severed Head buzz that's beginning to sweep the country! (Nothing like having a good buzz on, friends.) Endorse me at your blog, your MySpace or Live Journal page, whatever! Use any picture of me found at this blog. I'll put you in my cabinet if you do-- right alongside Johnny Walker, Jim Beam, and Glen Livet!

If elected, I will work to eradicate the discrimination against drunken politicians! Signs like this one* belong on the scrap heap of history: 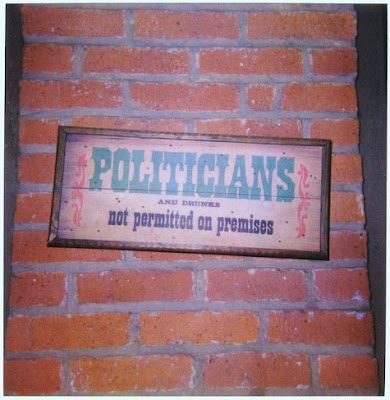 This November, when you belly up to the voting booth, name your poison. And let that name be "Max the Drunken Severed Head!"