Check out this cool portrait of one inebriated lopped-off noggin by cartoonist Becca Whitaker: 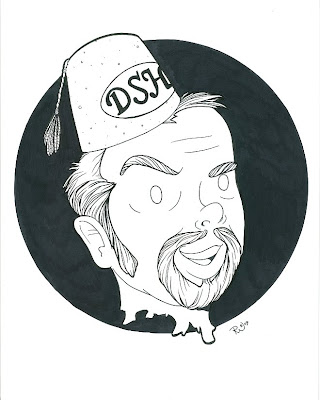 This scene inspired by my blog, Shakespeare and old monster movies is her work, too (click to enlarge it): 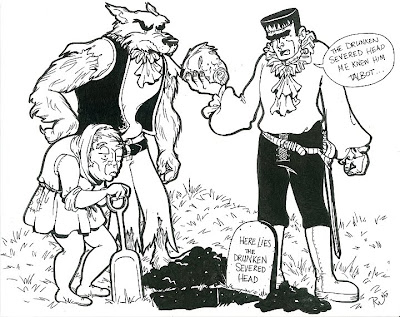 Franky has apparently come to bury me, not praise me. (Yeah, I know--wrong play.)

A monster and fairy tale mashup: 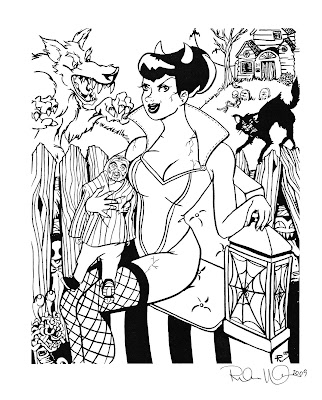 Becca's the creative force behind the blog No Smoking in the Skull Cave. (As well as the less splashily named blogs Sketches, Becca's Art, Color Art, and Wink Studios Photography.) I've long admired her skill with a pen, and I commissioned her to do a few drawings. I also like her takes on horror and overlooked genre films, and her appreciation for la femme magnifique.

Becca, who are your favorite cartoonists or caricaturists?

I've never been super interested in caricaturists but I love cartoonists. My absolute favorite cartoonist is Chris Sanders. He worked at Disney for a number of years and is best known for creating Lilo and Stitch, but his non-Disney work is very cool; sexy Hawaiian pin-up girls and cute animals. He also did a pretty funny comic for a while called Kiskaloo which you can read online and I highly recommend. I'm also a pretty big fan of Dan DeCarlo, Dean Yeagle and Jeff Smith.

Who would you say influenced your style?

This might sound weird, but the biggest influence on my style is pin-up model Bettie Page and filmmaker/photographer Russ Meyer. Obviously neither of these two painted or drew, but the style, humor and emotion of their images has really influenced what I put onto paper.

Ever woo anyone with your art?

Ha. No, I have given friends and family little drawings to make them laugh or cheer them up but I haven't used my art to pitch woo. 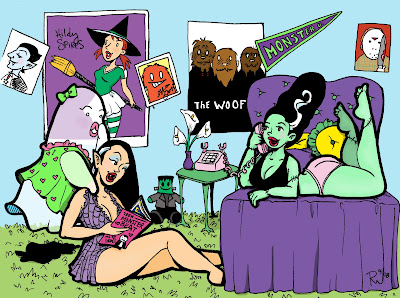 Did your art ever get you in trouble in school?

Not exactly. Luckily I had very liberal art teachers who were willing to let me express myself in my own way...even if it was drawings of girls in latex or creating pin-up girl paintings. I didn't ever get much hung in the classrooms, for obvious reasons.

You do photography and pen and ink artwork. Have you used your models in your drawings?

Usually I get poses and inspiration from old girlie magazines but I have done a few pieces based on photographs I've taken. I'm actually discussing a possible partnership with a model now, but nothing is final so I don't want to jinx it. 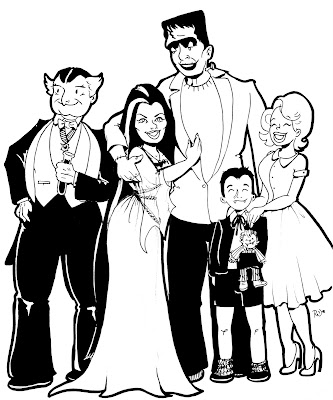 You get to have anyone, including people who have passed on, pose live for you to draw. Name one or two.

Oh, wow. Wouldn't that be cool? I would have to say 1950's Bettie Page; I don't think there has been a better model to this day. She could be so expressive and you just don't see that very often. Runners up: Aria Giovanni--she's like the living version of one of my curvy pin-up drawings--or Vixen! era Erica Gavin; in my mind she is the ultimate Russ Meyer girl and it would be a dream to draw her. 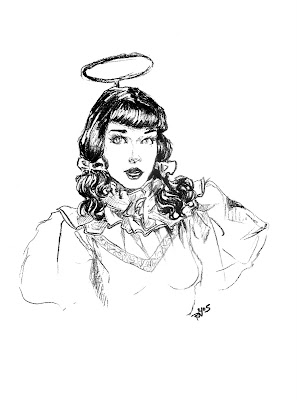 Name three strange objects you own.

1. A coin that my grandfather kept in his pocket during his service in WWII. He told me he would rub it with his fingers whenever things got tough and by the time he ended his tour of duty he had rubbed the image just about clean off. He was very important to me and it's like having a little piece of him around to this day.

2. A set of miniature plastic U.S. President figures through Kennedy I discovered when cleaning out an old attic. I keep my favorites on display, the rest in a box. Poor Millard Fillmore.

3. My collection of songs recorded by celebrities. I have the obvious ones, like Shatner and Nimoy, but I also have some weirder ones like "Boy Wonder I Love You" performed by Burt Ward and produced by Frank Zappa...yes, that Frank Zappa. Pure rotten gold. 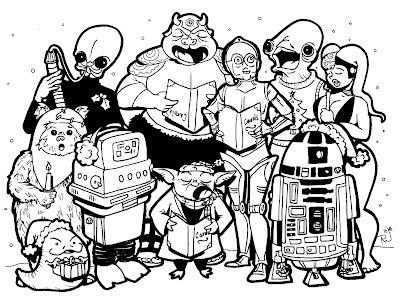 This is a hard question to answer! These are not the 5 greatest films ever made but probably my 5 favorite to watch over and over.

1. Barbarella (I never stop talking about my love of this movie. Someone once called me a Barbarella apologist which I thought was pretty funny)
2. Tommy
3. Big Trouble in Little China
4. Labyrinth
5. Death Proof 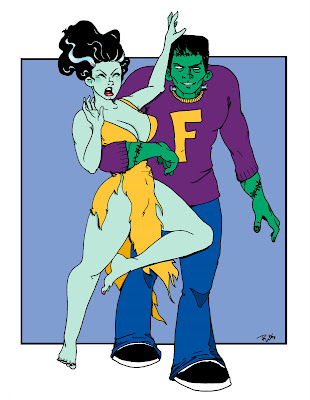 I offer you something to drink before you draw me. I've got everything. Would you want something with caffeine, alcohol, both, or neither?

Probably caffeine, I drink way too much coffee. 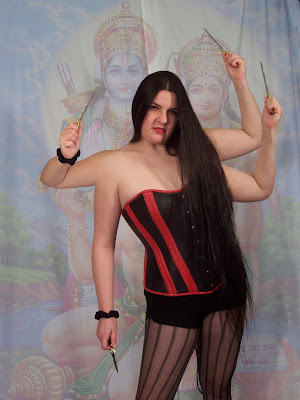 Rob Liefeld is pretty overrated, his comic characters have too many muscles, too many lines. They just kind of hurt my eyes to look at. Most underrated would probably be Burne Hogarth. He's an amazing artist who drew the Tarzan comic strip for years as well as writing a series of books on drawing. His stuff is awesome, but he doesn't get mentioned very often. Maybe Liefeld should read some of Hogarth's anatomy books and scale back on some of those insane muscles. 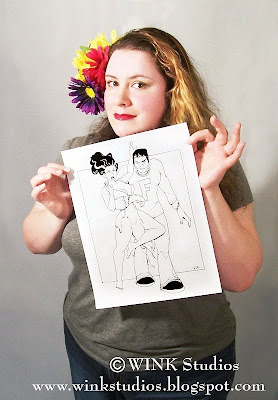 Photographic self portrait of the artist as a young woman...holding paper.
Thanks for the interview, Becca.

Cool questions. Thanks!
Posted by Max the drunken severed head at 1:16:00 AM

very nice talk with becca, that is what is great about blogs...

one, you never know what you get at the bottom of the cereal box.

three, those passions that keep us inspired

Becca is great, and an amazing talent! Great piece!

I have those same Presidents imprisoned in a Tom Corbett lunchbox.

I also used to have a pretty decent collection of celebrity records which I sold off in the mid-90s.

She still draws way better than I do.

Wonderful interview!
I love her art and the very cool answers she gave to your questions. :)
Great stuff!

Nice interview! I thoroughly enjoyed it!

Thanks, everyone, for the great comments! To know that you'd leave such nice feedback about MY blog tells me you all are good people...with no taste. Just what I like in people!

great stuff, i think my blog-zombie is full...

Great interview. I loves me some of Becca's work and have a great Demi/Selena image of hers on it's way to me. She is fantastic.

Here is an interesting bit of information. Talented comics artist, Dale Stevens, modeled his female heroine in The Rocketeer comics after Bettie Page. Along with the Disney release of The Rocketeer back in '85, a renewed interest in Ms. Page as a 1950's pin-up model was born. Alas, both Ms. Page and Mr. Stevens are no longer with us.