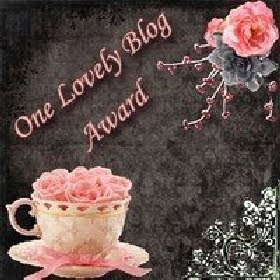 As 2009 wraps up, I want to honor some of the blogs that have intrigued, startled, amused, or otherwise impressed me. And at the same time, I'll pass on an honor that was given to me--the conferring of a "One Lovely Blog" badge/icon/thingy, as seen right:

The style's a bit Red Hat Society-ish, I admit, but it was bestowed on me by a noted doctor, Dr. Zaius of Zauis Nation.

Yeah, yeah, that happened nearly three months ago. Eh. I hate choosing who to pass honors like this onto, because there are so many good blogs out there. I've honored several before, and of course all the blogs in the LOTTD group (see elsewhere on this site) are very good, and hell, I just don't know how to whittle down my choices.

For this particular pat on the back, I was supposed to pay this compliment forward to 15 blogs. I thought of more than 50! I finally narrowed it down to 33, and I'm posting links to them in 2 parts.

1) Accept the award, then post it on your blog together with the name of the person who has granted the award, and his or her blog link.

2) Pass the award to 15 other blogs that you've discovered. Remember to contact the bloggers to let them know they have been chosen for this award.

But rules are meant to be broken. So I pass on this Lovely Blog honor with a lovely revision:

3) If the folks I like accept the "OLB" e-grease, they can pass the honor to whatever number of blogs they determine best.

Now the list of honorees--with the reasons why! (That's a feature you don't often get with these mutual mastur--er, virtual admiration awards.) Okay, away we go:

Freddy in Space (John Squires) For his devotion to film horror, and coverage to all its facets, and his sense of humor.

Vault of Horror (Brian S) For his enthusiasm, intelligence, and creativity in appreciation of horror.

Oh! So Spooky. Oh! So Scary. (Belle Dee) For helping educate about, and preserve, the spooky sights & sounds from the early 20th Century.

Negative Pleasure (Harris Smith) For his occasional grumpiness, which leavens his intelligent film reviews; and for his magazine sharity.

No Smoking in the Skull Cave (Becca) For her clean-lined, appealing art and her eye for la femme magnifique.

An Actor's Notebook (Mark Redfield) For his informed and intelligent look at classic performances and the acting process.

It Came From Allen's Brain (Allen H.) For his humorous, spiritual take on genre items.

The Skull and Pumpkin (Mike C.) For truly keeping the spirit of Halloween all the year 'round.

A Patchwork of Flesh (Coop) For showcasing talent from around the world with one simple theme: Frankenstein's creation.

The Roads of Autumn Dusk (Roger) For his odd comics, love of Lovecraft, and deadication to classic horror films.

Weird Hollow (Todd Franklin) For his sense of humor, love of monsters, and his fun, clever videos.

Frog on the Pumpkin (Chris Davis) For sharing the details of her obsessive devotion to Halloween.

Azathoth's Abode on the Plateau of Leng: The Dungeon (someone calling himself Azathoth!)

Universal Horror Sounds (Greg) Both Azathoth and Greg's blogs are marked by a deadication to horror audio sharity.

Ubermilf (SM) For her unique perspective, and for her bitching and moaning that always makes me laugh.

I toast you all with a decidedly alcoholic eggnog!

Max,
I am so incredibly honored, that I'm virtually speechless...good thing I can keep right on typing and not utter a word :)
You were one of my very first "followers" and although I don't post nearly enough on your sui generis blog of delights, I do read it religiously. You are the neatest severed-head kind of guy that I've ever known. Some day when my blog (The Roads of Autumn Dusk) grows up, I want it to be just like THE DRUNKEN SEVERED HEAD.
All my best,
r/e
p.s. Your seasonal title/logo banner pic of Santa and the "real" Jack Black rawks my friend.

After reading your comments, my face is red!

Comes from the eggnog, though. (Lotta niacin as well as rum in it.)

BTW, I had assistance on the banner from Ted Newsom, who has the skill to create in Photoshop what I wanted for that banner.

I've been noticed! By a drunken severed head in a bedpan!

Off to check out the other blogs!!! If you follow them, they must be interesting. :D

To quote Eeyore: "Thanks for noticing me."
To quote Zombie Eeyore: "Nrrrgghnuh"