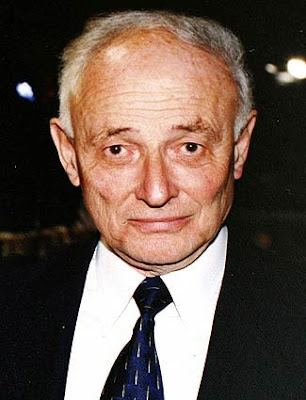 In this blog, I like to celebrate fictional monsters, and show the unusual.

Recently, a real life monster killed thirty three people at a college campus, and is the focus of much media attention this week.

But another man showed unusual courage that day in the same place, and is the man who deserves our attention.

To the right is a picture of Liviu Librescu, the hero of the recent Virginia Tech massacre, who lost his life to save others.

I learned his name just today, along with some details of his life and his actions at VT on April 16. According to the Associated Press: "The Israeli lecturer killed in the Virginia Tech massacre was a Holocaust survivor who later escaped from Communist Romania. Relatives said Librescu, an internationally respected aeronautics engineer and a lecturer at Virginia Tech for 20 years, saved the lives of several students by blocking the gunman before he was gunned down in Monday's shooting, which coincided with Israel's Holocaust remembrance day."

Mr. Librescu urged his students to escape by way of the windows, while pressing his lecture hall door shut against the gunman trying to enter. He managed to delay the killer long enough for all the students in the lecture hall to get out.

May we all be more tenacious and courageous like him.

(Photo Getty Images)
Posted by Max the drunken severed head at 12:44:00 AM