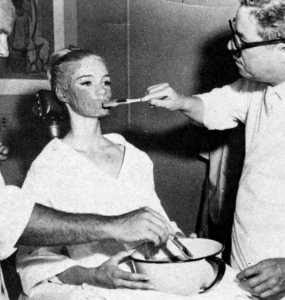 The first man to be given an honorary Oscar for achievement in makeup (in 1965; the category of "Best Makeup" was not established until 1981), William Tuttle, has died at age 95. He worked most often for MGM. His credits in horror, fantasy, and otherwise psychotronic films are amazing:

Mark Of The Vampire
The Wizard Of Oz
Angels In The Outfield
The Glass Slipper
Forbidden Planet
Lust For Life
Jailhouse Rock
The World, The Flesh, And The Devil
Tarzan, the Ape Man (1959)
The Time Machine
7 Faces Of Dr. Lao (for which he was given his Oscar)
What's The Matter With Helen?
Necromancy
Young Frankenstein
Logan's Run
Silver Streak
The Fury
Love At First Bite

His television credits included work on the programs One Step Beyond, Twilight Zone, and the television movies Moon Of The Wolf, The Night Strangler and The Phantom Of Hollywood. The photo above is of Tuttle working on Yvette Mimeux during the production of 1960's The Time Machine. Below are photos from 7 Faces Of Dr. Lao, showing Tuttle's work on actor Tony Randall: 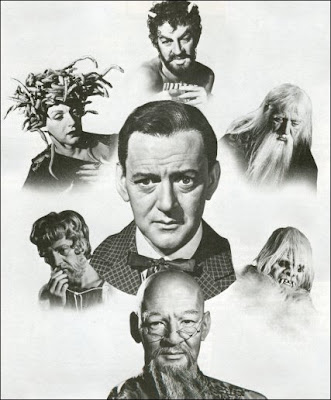 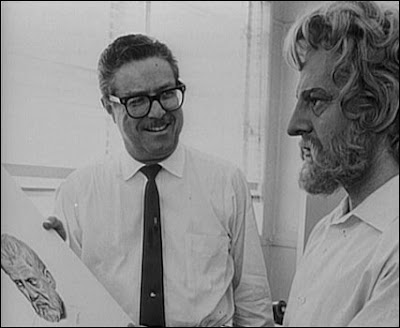 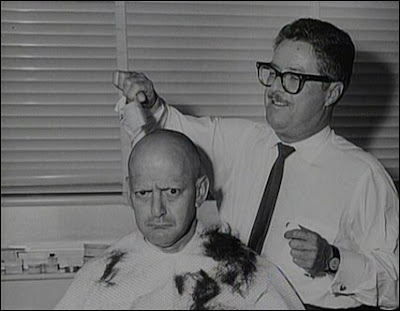 Rest in peace, William Tuttle, and thanks for the work that impressed us all.

(A recent photo of Bill Tuttle with makeup artist Tom Savini can be seen here.)
Posted by Max the drunken severed head at 8:39:00 AM