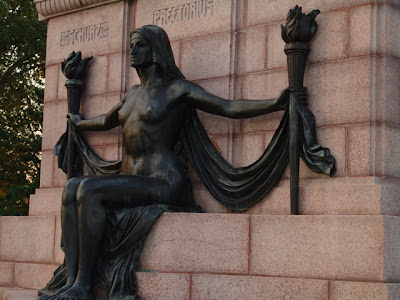 Because it is in the same park as the tower shown in the previous post, (and because I love well-crafted representations of lovely mammaries), here's a picture of an interesting statue named "The Naked Truth". It is a memorial to three men who lived in St. Louis after the Civil War: Dr. Emil Preetorius, Carl Schurz and Carl Daenzer, all editors of the German-American newspaper, the St. Louis Westliche Post. From the official St. Louis government website:

"A jury selected a design by sculptor Wilhelm Wandschneider of Berlin. Busch was appalled by the jury’s selection and the controversy over the nudity in the statue prompted great debates. The sculptor refused [financial donor Adolphus] Busch’s request that the figure be draped.

"The jury voted 14 to 12 to accept the original design but said the nude figure should be made of a material other than white marble, to de-emphasize the nudity. The figure is made of bronze."

Unrelated to this post or this blog: Today I learned that you can find the naked truth about Wikipedia censoring at this website.
Posted by Max the drunken severed head at 8:59:00 PM