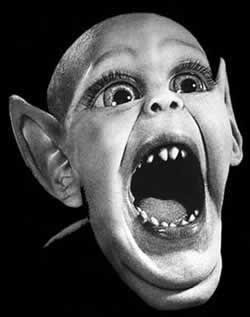 THE WEEKLY WORLD NEWS folded this week, sad to say. Back in the 1980s, when I had a late-night talk show on an AM station in Memphis, TN, I would read "news reports" from The National Enquirer and The Weekly World News ("The World's Only Reliable Newspaper").

American Media has suspended publication of both the print and web versions of The Weekly World News.

Its recurring character "Bat Boy" became popular enough to be the subject of his own musical play, which has been produced around the country.

Weekly World News website
Posted by Max the drunken severed head at 3:54:00 AM