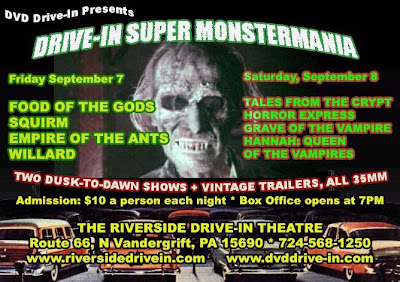 The Voodoo Queen and I recently attended the above event, and we both had a stupendously fun, retro-ridiculous good time!

Hell, any event where I can watch HORROR EXPRESS (for the half-dozenth time) and still get a big kick out of it is a terrific (terror-ific?) event! Nothing like a huge screen to make a movie a marvel. The Bert Gordon movies FOOD OF THE GODS and EMPIRE OF THE ANTS were a bigger thrill than I thought they'd be. I'd expected the tedium of something like FROGS, or TROG, movie dross from the '70s. But noooooo, they were very entertaining. And all in gorgeous color.

The event was at a theater where we had seen the original "The Blob" last summer, the Riverside Drive-In, about 45 minutes away. The ride itself was nice, taking us through some scenic parts of rural Pennsylvania. We got there early enough to meet people, and got to talk to several interesting fans of classic cheeseball horror/exploitation flicks. Friendly people like Art Ettinger and Jamie Summers, editors of Ultra Violent magazine. (They gave me issue 8, which has just come out, and I enjoyed quite a bit.) I also met Derek Anderson of the horror surf-rock band Forbidden 5. (The band will be playing locally in October with one of my favorite players of graveyard surf-rock, The Ghastly Ones.) 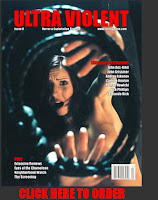 Over 150 people were there, which, for an event without any history or sizeable ad campaign, was pretty good. At least I thought so. George Reis, the man who dreamed up and organized the event, had hoped for more, and I can sympathize. But people came from Delaware, Illinois, New Jersey, New York, Ohio, Pennsylvania and West Virginia, so the event seems to have begun with a solid start.

I was very happy to meet George; he was a friendly guy and enthusiastic about 1970s drive-in horror fare. (Even so, he seemed a little bit anxious at the start about the success of the event, understandably.) His selections were all very good. The audience both nights seemed to have a blast. (Jane and I certainly did!) No one stayed in the snack bar. People hooted after each film, and nearly all stayed through the program of four films (plus trailers) each night. (Perhaps the most defections came when Grave Of The Vampire began and during its screening, as it was somewhat slow, and a fairly faded print. And Grave was also the seventh of eight features screened.)

But Grave Of The Vampire was fun, having plenty of lurid elements (like a rape by the vampire in an open grave!) and a good performance by Michael Pataki (The Onion Field, Dracula's Dog) as the evil bloodsucker. And seeing it on the theater's large 35 by 50 foot screen made it a sight.

The faded quality of the print was unavoidable, as I doubt the original camera negative or even a fine-grain master still exists for this low-budget indie vampire film. We were lucky to see any print of it! The studios that made and/or own the rights to exploitation and schlock films aren't keen to strike rental prints when they do have elements to work with, since theater demand is practically non-existent. Often, they have to rent prints from other sources to supply the occasional revival screening.

The prints for DRIVE-IN SUPER MONSTERMANIA were from the collection of Harry Guerro , one of the partners of New Jersey company Exhumed Films. Harry, a guy young enough to have grown up with small-screen multiplexes, cable TV and video stores, surprisingly loves old-fashioned 35mm FILM, projected on a really big screen with some showmanship, bless him. As the website for Exhumed Films says, "Sadly, in a time of video/DVD, cable television and satellite dishes, the theatrical experience of watching horror movies has all but disappeared. The only fright flicks a film buff has any chance of seeing in the theaters are the slick, homogenized “teen” movies released by the major studios....Exhumed Films has worked diligently to re-capture the aura and atmosphere of the bygone horror double-feature." 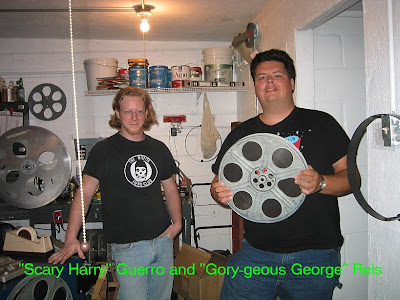 If this event was any indication, they have thoroughly succeeded.

Another key person to the success of this event was Riverside Drive-In Theatre owner and projectionist Todd Ament. A cheerful, gracious guy to talk to, he was the first theater owner to say "yes" to George Reis's idea for the festival. Sadly, the drive-in isn't going to make Todd rich anytime soon, and the during most the autumn and winter he works elsewhere. If I had my way, he and every other drive-in operator would make a boatload o' money! (And he'd get even richer just for hosting DRIVE-IN SUPER MONSTERMANIA!) 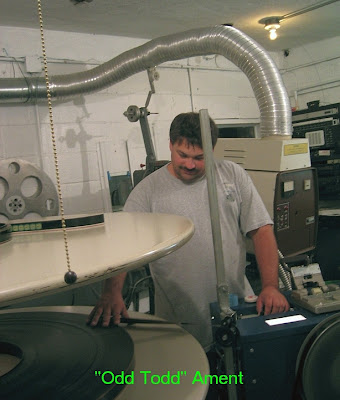 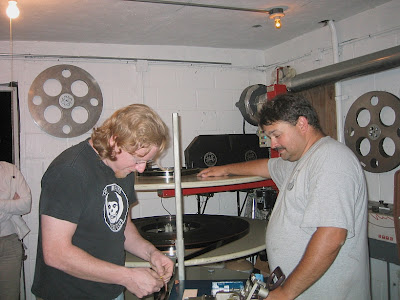 Of course, none of these guys had the nicknames I put on their photos, but somehow it just seemed the schlockily-right thing to do. (Beats nicknaming someone "Pooty Put" or "Turd Blossom" as our Chief Executive has done.) I'm truly grateful to these three men for staging an event that made me feel sixteen and at the drive-in again. Except this time I actually watched the movies!

Looking forward to SON OF DRIVE-IN SUPER MONSTERMANIA in 2008!

Here are some more photos I took at this super cinematic celebration: 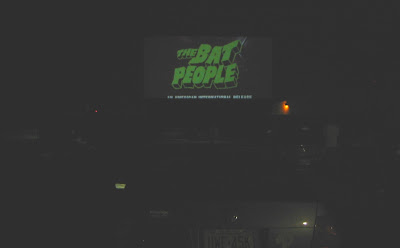 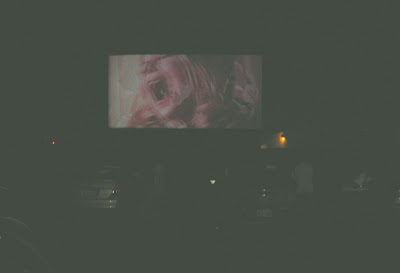 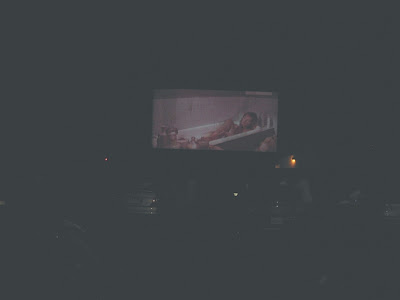 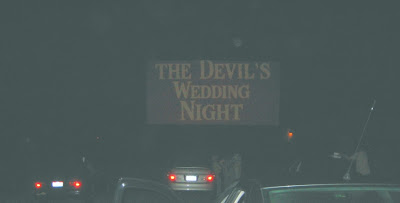 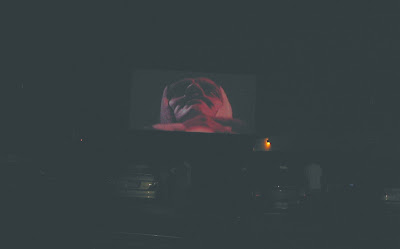 When events like these arise from labors of love, it's truly inspiring. I'm glad there was a good crowd for it, and you had a good time.

I was as tired as I look in the photos. It is truly a labor of love. Have to be devoted to your trade as we started building the film prints at 2:00 in the afternoon for a 8:00 start. I started working on George's preview reels at least three weeks prior to the event.