The DSH is blown away by the recent passing of Gas. Sir Frederick Gas, that is. He was actually Earl Bennett (no, not the football player!), and a man of many talents. He was best known for his years as a performer with Spike Jones And His City Slickers. Later Bennett worked as an editor for various Hanna-Barbera TV series, including Frankenstein, Jr. And The Impossibles (1966) and Scooby-Do (1969).

He was also a gifted painter who had studied under Thomas Hart Benton. Clips of Bennett talking about Benton can be seen in the 1989 Ken Burns documentary THOMAS HART BENTON, and a portion of Bennett's comments can be seen here.

In the video clip with this post, Gas/Bennett is seen in the middle, his mop of hair teased out, and singing the opening vocal portion. He does a very good parody of the lead singer of The Ink Spots.

Frederick Gas/Earl Bennett was a talented and funny man, and am truly sorry to hear of his death on Oct. 4th. (Even if it provides for a funny subject line.) But there is good news to share: the Spike Jones TV series, which the video clip comes from, is being released on dvd on Oct 30th!! 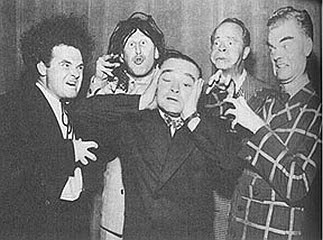 Special thanks to George Chastain.

I was never aware of the individual names of any of the City Slickers.

Now I know where David Lynch got the inspiration for the look of the Eraserhead character.

You know, I imagine he would appreciate your subject line. :-)
This gives me an itch to do further research--which is always good. Do you know whether any of the other City Slickers are still alive?