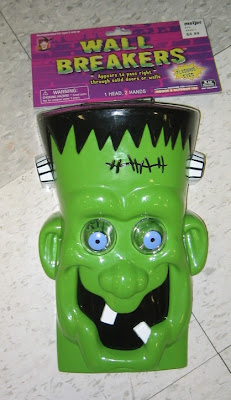 This is the kind of commercial image of the monster that I dislike seeing this time of year.

The 1931 Universal film version of The Monster remains, despite hundreds of versions of the character seen in myriad films, television shows and comic books, the most influential design of The Monster ever done. Here are all four elements of that design: flat head, prominent brow, gash/scar on the head, and electrodes/bolts on the neck or head. But this image represents the Monster as a goofy cartoon simplified down to the level of a toddler-friendly design. This is an impotent monster!

The Monster , even in a cartoon design, can have some power to look monstrous or powerful. 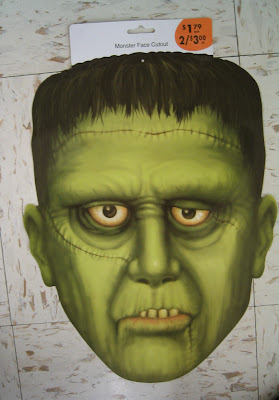 Here he is in a current Halloween decoration looking much better than the top image, but missing the electrode/bolt element. This is a monster! Sadly, because the Universal monster movies, being in black-and-white, are sadly not being seen much by kids anymore, few Hallowen mass-market items take the Universal-style Monster very seriously. Another nice exception is this: 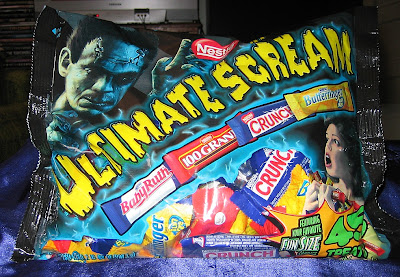 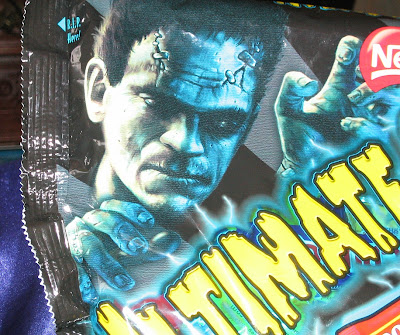 The above is art on the Nestle's candy assortment bag marketed for trick-or-treating.

Below is a flashlight found in dollar stores. It features a very TIRED looking Monster. (Angry villagers keep him up nights.) Still, it's a face wouldn't want to meet on a dark night.

Have to leave for work; more of this (and a post on The Ghastly Ones) to come.
Posted by Max the drunken severed head at 1:38:00 AM

Is that Nestle bag the one from a few years ago, or one of this year's bags? I'd have to get it out, but this year features Frankenstein and Dracula, and I think the artwork is different. Don't forget the Universal Monsters Fruit Snacks....the artwork on those was great too! If you don't have pics of those, I can get them for you.

The Nestle bag is this year's. (Unless Walgreen's everywhere are selling last year's Halloween candy!

I do have this year's box for the Universal Monsters Fruit Snacks, but I'll be gratefully happy to take pics, since I haven't shot any. ESPECIALLY if you have good pics of the gummy candy monster heads. My camera doesn't take good tight closeups.

Sorry....I ate all the gummy heads. :-) Only kept the little bags and the boxes.

By the way....the best way I found to save this Nestle bag and still get the candy out is to split it open along the seam down the middle of the back, and take the candy out that way. That saves the bag so you don't have to cut it either edge or along the top or bottom....the back seam works well.

Thanks for the tip, O Horribly Universal One! I find that the candy heads look good stuck on a swizzle stick in a cocktail. Makes it look like you're having a drink that Vlad the Impaler would favor, if he were still around!

Have you ever seen the Cool Topz drink containers from several years ago? They did both Frankenstein and Dracula....I have them both, and they look great! (Cool Topz were something like Bellywashers drinks)

Can't say I've seen the Cool Topz monsters! But be looking out here at this very blog for an appearance by the Bellywasher monster!