(A bit of the text below comes from a post I made at The Classic Horror Film Board. If you have seen it before , I bug your indelgence.)

Back in the ancient days known as the 1960s, The Universal-style Monster was still an ugly brute, with a visage terrible to behold. That was back in the days when the Universal films were still watched by kids on TV, and in Hallowe'en theater screenings. Of course, he was usually depicted in mass merchandise as being green, just as he had on lobby cards and posters since the days of Universal's initial release of FRANKENSTEIN in 1931. Here's a green 1960s Ben Cooper Frankie mask and costume: 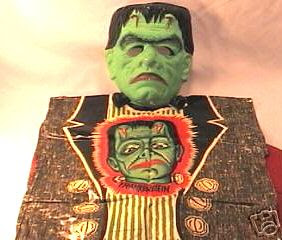 Note that the design of the mask is based on test makeup for the 1931 film and not the final design. Not a common choice in Hallowe'en merchandise.

Here are two pics of rubber masks of the mad scientist's creation from the last two Hallowe'en seasons. The first was found at Walgreen's, the second at Target, which usually has a large and varied supply of items for celebrating Hallowe'en: 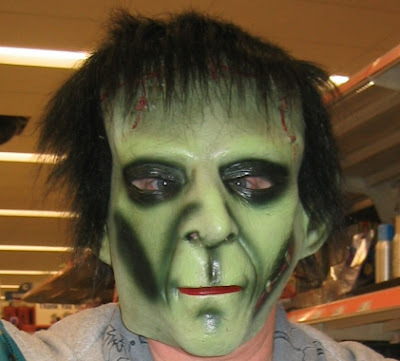 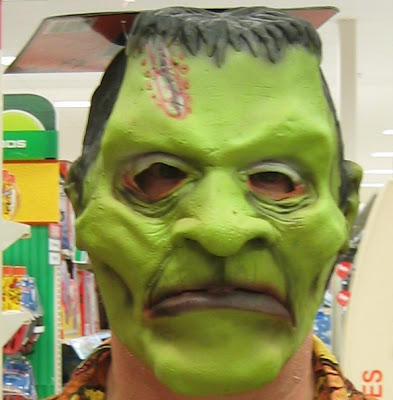 The second is better than the first, but the Ben Cooper mask, though aimed at a younger customer in the monster crazed 1960s, is still the best design. 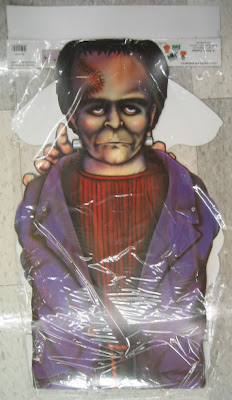 Presenting three toy monsters of recent years who are capable of animation. Mwah ha ha ha ha!! Because of the bland face, the last one IS the least-- despite having eyes that become demonically alight : 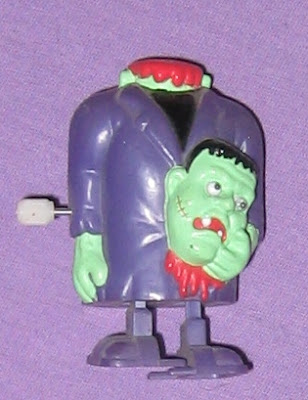 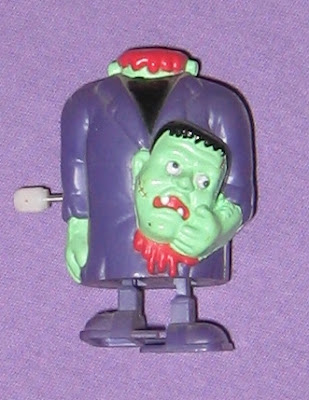 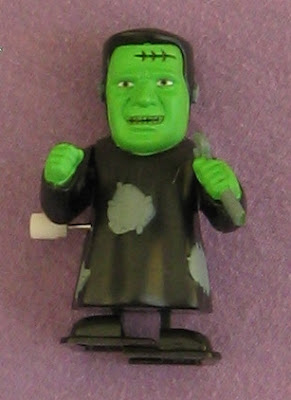 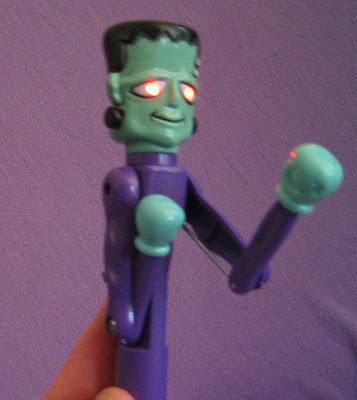 That last Frankie fought Sly Stallone in one of the endless ROCKY series, I believe.

Here's a 2004 Bellywasher bottle with a Frankie head that seems more inspired by the film THE ROCKY HORROR PICTURE SHOW than FRANKENSTEIN. 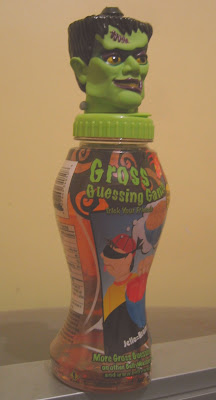 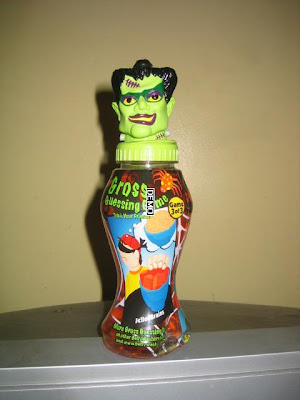 Another current sappy Monster, though one that seems friendly, if simple-minded: 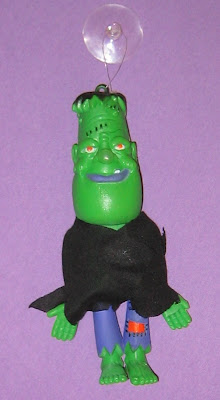 More designs of vacancy, insipidity and impotency ( though they're not all entirely without cheap charm): 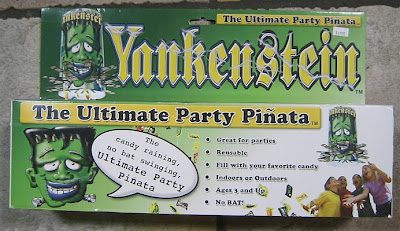 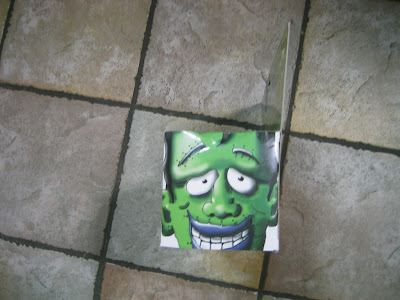 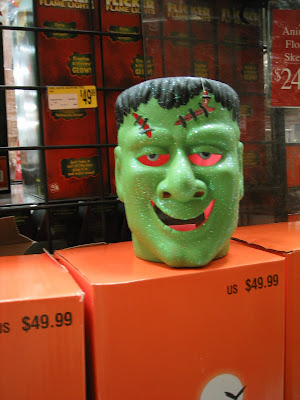 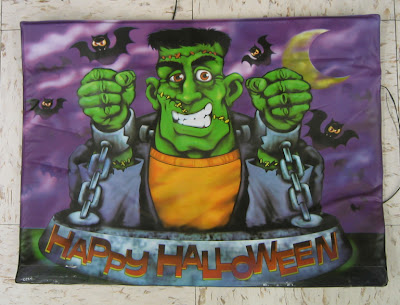 The Monster head above is thinking: "Does this pencil make me look fat?" The artists at candy companies do seem to do better with The Monster: 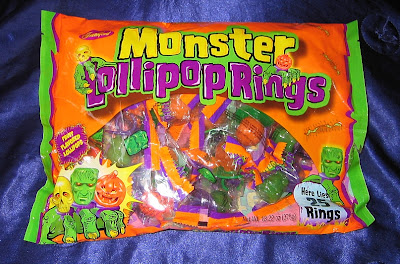 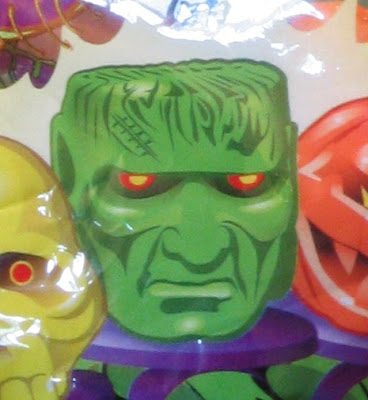 It has been said that The Monster is often depicted as green because it is the color of illness, and of the decay that comes after death. That's part of the explanation; I think it's also because it's the color of many cold-blooded species of animals, creatures we find harder to embrace as cuddly, noble, or cute. They are more frightening and alien to us.

But why is the Universal-style Frankenstein Monster so ubiquitous (I paid twenty dollars for that word) after all these decades?

I think the design is iconic because it resembles the square lines of something mechanical, robotic.

It's a nod to machine design and the increased cultural interest in technological wonders.It's a design that makes no sense medically-- which just indicates (especially to the audiences of the 1930s) that it must be VERY advanced. It is non-rational; it is practically a parody of rational design. It hints of something yet to come. (Today we might call it "cyborg-like".) The exposed metal rod in the arm, the electrodes-- they hint at a creature not just corpse-like and brutish, as in the images of the novel, illustrations and plays, but something new and different. Yet that single, hairless brow ridge does convey something atavistic too, even though it is nothing like the brow of our hominid ancestors, except for prominence.

A brilliant mash-up of ideas, it is an enduring, nightmarish design.

The Monster lives eternal!
Posted by Max the drunken severed head at 1:13:00 AM

Hiya, Drunken Severed Head! Because I have a choice, I'll leave a comment, a criticism, and a non-sequitur!

Comment: Cool photo essay!
Criticism: The crust on that pizza I had this weekend really coulda been crispier.
Non-sequitur: I think Frankenstein's favorite flavor of jello is lime. Yep. Lime.

I love Rocky Horror-stein! And did you notice that the words "Gross Guessing" rhyme with 'cross dressing?" I'm pretty sure that was intentional!

Head, here's four links to pics I took awhile back showing the Cool Topz bottles with Frankie and Drac:

UH, none of these posts work for me.

They should....I even made sure I was logged out in order to check them, and it works fine for me. It's a public album, so anyone should be able to view the pics. Did you copy and paste the entire URL for each one?

THOSE worked! Thank you!

The sculpts on those bottle heads look better than the faces on the labels. The Frankenstein head rather resembles Leonard Nimoy!

I figured that was your problem....If someone hasn't posted hotlinks AS actual HTML links you can simply click on, when you copy-and-paste a URL like the ones I first posted, you have to make sure you get ALL of the link copied by actually getting part of whatever space or line is just below each link....that way you'll be sure to get it all and it WILL work.