Here are some photos of models Jim has done for the drunken severed head, (all but one a model of a classic Universal monster, and each one a superlatively rendered work.) They're followed, somewhat anticlimactically, by some puns he forwarded to me, not knowing that I'd post them on my blog. The chump!

And so the suffering passeth on ... 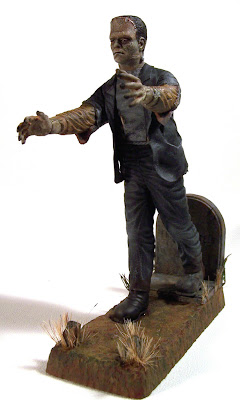 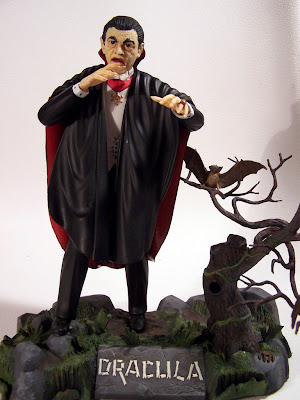 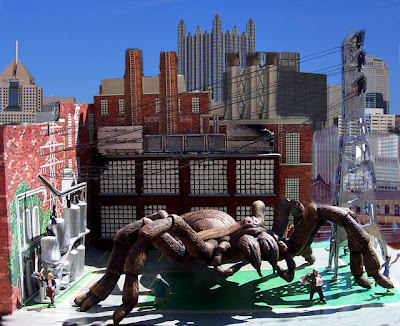 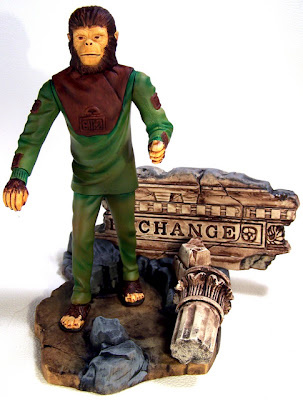 1. A vulture boards an airplane, carrying two dead raccoons. The stewardess looks at him and says, "I'm sorry, sir, only one carrion allowed per passenger."

2. Two fish swim into a concrete wall. The one turns to the other and says "Dam!"

3. Two Eskimos sitting in a kayak were chilly, so they lit a fire in the craft. Unsurprisingly it sank, proving once again that you can't have your kayak and heat it too.

4. Two hydrogen atoms meet. One says "I've lost my electron." The other says "Are you sure?" The first replies "Yes, I'm positive."

5. Did you hear about the Buddhist who refused Novocain during a root canal? His goal: transcend dental medication.

6. A group of chess enthusiasts checked into a hotel and were standing in the lobby discussing their recent tournament victories. After about an hour, the manager came out of the office and asked them to disperse. "But why?", they asked, as they moved off. "Because," he said," I can't stand chess nuts boasting in an open foyer."

7. A woman has twins and gives them up for adoption. One of them goes to a family in Egypt and is named "Ahmal." The other goes to a family in Spain ; they name him "Juan. " Years later, Juan sends a picture of himself to his birth mother. Upon receiving the picture, she tells her husband that she wishes she also had a picture of Ahmal. Her husband responds, "They're twins! If you've seen Juan, you've seen Ahmal."

8. A group of friars were behind on their belfry payments, so they opened up a small florist shop to raise funds. Since everyone liked to buy flowers from the men of God, a rival florist across town thought the competition was unfair. He asked the good fathers to close down, but they would not. He went back and begged the friars to close. They ignored him. So, the rival florist hired Hugh MacTaggart, the roughest and most vicious thug in town to "persuade" them to close. Hugh beat up the friars and trashed their store, saying he'd be back if they didn't close up shop.

Terrified, they did so, thereby proving that only Hugh can prevent florist friars.

9. Mahatma Gandhi, as you know, walked barefoot most of the time, which produced an impressive set of calluses on his feet. He also ate very little, which made him rather frail and, with his odd diet, he suffered from bad breath. This made him (Oh, man, this is so bad, it's
good) a super calloused fragile mystic hexed by halitosis.

10. And finally, there was the person who sent ten different puns to friends, with the hope that at least one of the puns would make them laugh. No pun in ten did.
Posted by Max the drunken severed head at 4:01:00 AM

Those models are great, the puns...

Well, I've always liked the one about the atoms.

I knew you wouldn't be able to resist the evil of puns!!! Heh, heh, heh!