So the Voodoo Queen and I are in a store making the yearly Christmas returns and exchanges, when I see, out of the corner of my eye, a photo of a beautiful woman on the cover of a magazine. So I look, and the "beautiful woman" next to the words "Hottest Beauties Of The Year" is...MICHAEL JACKSON???

Oh my god. Okay, so "Hottest Beauties Of The Year" apparently refers to an article NOT about Michael Jackson. But, from the photo of the former King of Pop, I'm guessing he's had more done to his face that makes him look ever more she-male. 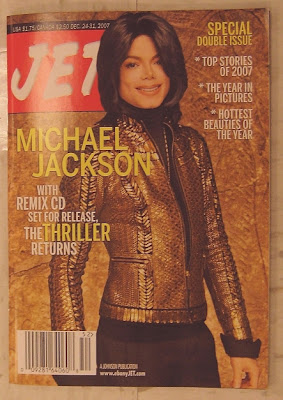 Seems to me he oughtta get the re-assignment surgery once and for all and be done with it. By the time he gets around to it, he'll look less like Diana Ross and more like Miss Jane Pittman.

Metaphorically, he'd have greater cojones if he had no cojones.

And speaking of Diana Ross, go here and see what she looks like today. Either she has a Dorian Gray-style portrait of herself in a closet, or she passed away and we're seeing the animatronic Diana, like the robots in WESTWORLD. Or maybe she's been plasticized like those corpses from China now touring in museums in the BODIES exhibition. (It's currently here in Pittsburgh, and I sorta have a yen to go and see it.) She seems to have stopped getting older, and I wish I knew the secret of her preservation. Can't be alcohol, though. I've been pickled for years and it hasn't kept me an ageless beauty!
Posted by Max the drunken severed head at 7:40:00 PM

The pose on the cover there brings to mind a young female figure skater, which is certainly the build he seems to have there. It pains me to look at that steak knife he has instead of a nose, and what's up with the collagen filled Joker grin?

At least he's got a more natural looking skin-tone going.

If you ask me though, I think they'd have been better off going with one of the hottest beauties of the year on the cover. I'm sure Michael will be perusing those pages for inspiration.