Goodbye to the Gillman... 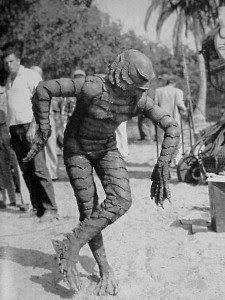 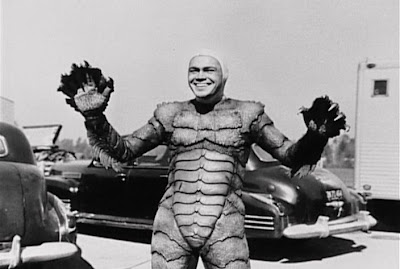 Yesterday the sad news came that Ben Chapman died at age 79. He was the man who played the Creature from the Black Lagoon in the first film of the series.

The outpouring of grief over the internet has been amazing. People are saying that the news brought them to tears. Mr. Chapman frequently attended conventions and saw so many fans over the years that people felt they got to know him, and universally the opinion of Ben Chapman is a glowing one. I met Ben Chapman a couple of times at the Monster Bash convention here in Pittsburgh, and always found him cheerful, gracious and just a down-to-Earth guy.

He often would dine or have a drink with fans. Once at the Bash, when I saw him drinking alone, I invited him to join a group of us in the Universal Monster Army having drinks. This time, he politely declined, saying that he preferred to be near the entrance and watch people. And that is what he did-- and he seemed to be enjoying viewing the panoply of chattering people in front of him. (He may have been amused to see all the people who would glance his way, then turn back smiling to see "The Creature" in the bar with them, nodding in his direction.)

His appearance at the last Monster Bash was cut short by illness, and he was genuinely sorry that he had miss seeing his friends and fans.

I'm not sure that I've seen as much emotion for the death of a figure in horror film history since the death of Boris Karloff, who was also a beloved figure.

Chapman is being eulogized as a man generous with his time, friendly, funny, kind to kids, and always at ease with his fame for playing a monster. To see candid, funny photos of Chapman (including photos of his return to the Universal sets where "Creature" was shot) and read anecdotes and remembrances from his friends and fans, visit these message board threads:

An extended reminiscence of Chapman can be found at this blog:

At Ben Chapman's website is this message: "We are going to put up a page of memories from his fans. If you have a memory you would like put on this site, e-mail: kenroar (at) yahoo.com."

Chapman was a resident of Hawaii. The online version of the paper "The Honolulu Advertiser" has an article on his passing: