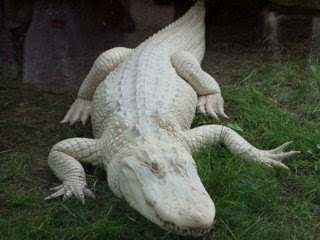 ...the "thing" being another cool (and ghostly-looking) reptile!

I forgot that I had in my files a picture of an albino alligator. I had found it somewhere on the 'net; I forget where. But there it is.

I hope that the thing winds up taxidermied when it passes away (if it's still alive). I have fond memories of seeing "Big Arkie," a 13 foot, 500 pound alligator that was big attraction at the Little Rock Zoo when I was a child; I remember seeing him both alive and when he was dead, because when Big Arkie died in 1970 he was stuffed and put back on display at the zoo for another few years.

At the time of his death, he was thought to be the largest alligator in captivity in the western hemisphere. He'd been caught in 1952 in a flooded pasture near Hope, Arkansas.

His body, seen below, is now in a university reference collection in Arkansas and is no longer on display to the public. But a lot of Arkansans, and former Arkansans like me, sure have vivid memories of the big hulk. 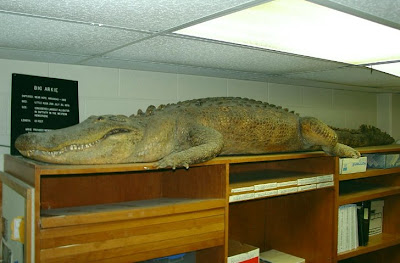