So back to talkin' about the events of the Marathon. There were some fantastic trailers for classic and not-so-classic science fiction films, as well as snack bar promo films and 1960s sci-fi shorts. (Man, do I miss that aspect of the '60s and early '70s-- the short films created to fill time slots in theaters and television!) Here are some snapshots of some of what was shown: 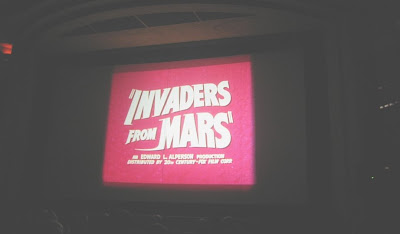 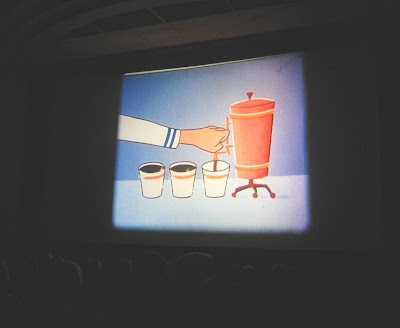 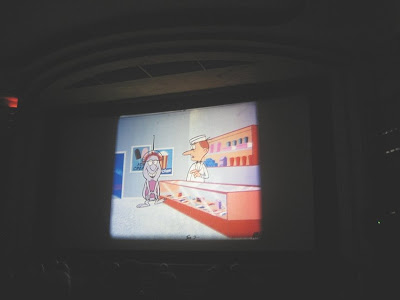 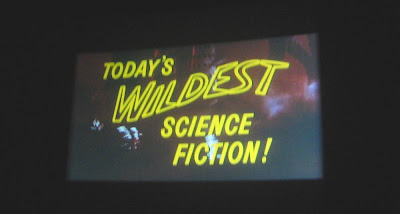 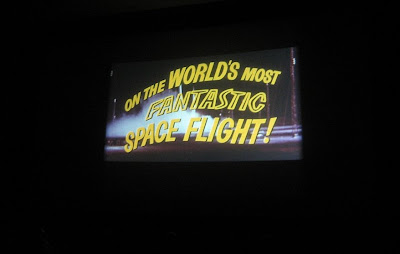 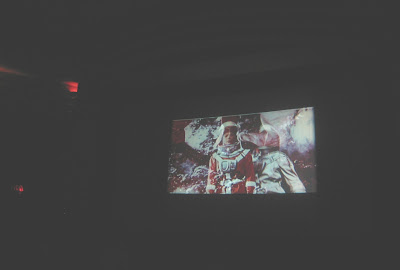 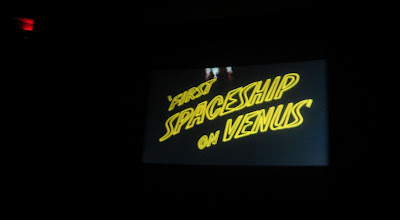 The screening of THE DAY THE EARTH STOOD STILL came early Saturday evening, and was followed by the Q & A with Patricia Neal.

Near the end of TDTESS, where Ms. Neal's Helen is inside the saucer with Gort, Ms. Neal was apparently wheeled in quietly to the back of the theater. (That's what it appeared to me as I craned my head around to see what was going on, but it was pretty dark.) Then, some doofus shouted out, "Gort! Fuse box!" because the interior saucer is dimly lit in that scene. I wondered whether Ms. Neal heard it, and what she thought. I'm sure she wasn't thinking, "That's just what that scene needed! Thanks, sonny!" as she slapped her knee in hi-larity. Damn Moron.

It was amazing that Ms. Neal came at all. She'd had the flu on Monday, then appeared at an event on Thursday and another on Friday. She told the crowd she didn't feel her best, but seemed genuinely happy to be there. What a trouper!

At times, she struggled to answer questions, and completing sentences occasionally required more than one attempt. Obviously self-conscious, she made several apologies, embarrassed by the fact that she often had to have her daughter supply names, titles and dates. She said her difficulties was partly due the effects of the strokes she'd had in the early 1960s, (three in a row while she pregnant, leaving her in a coma for three weeks), and partly due to her lingering bout with the flu. But she was game to reminisce, and was charmingly enthusiastic. Later she proclaimed, "I'm still a little ill, but I'm still HERE, baby!"

I took pictures, but most of 'em turned out grainy. Here they are, flaws and all: 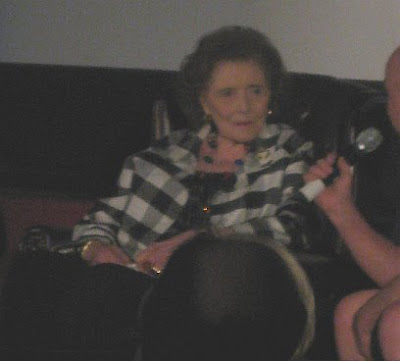 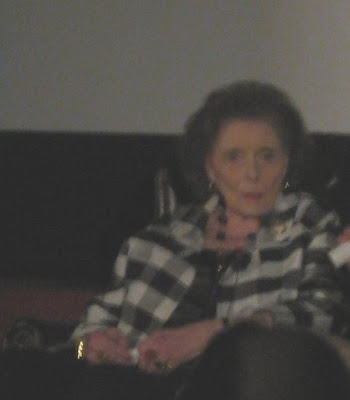 On the topic of THE DAY THE EARTH STOOD STILL, she said she enjoyed working with Hugh Marlowe, and liked 13-year-old child actor Billy Gray "very much." She said he wasn't a typical actor his age, where typically "they don't know what they're doing at that age-- they're cocky." 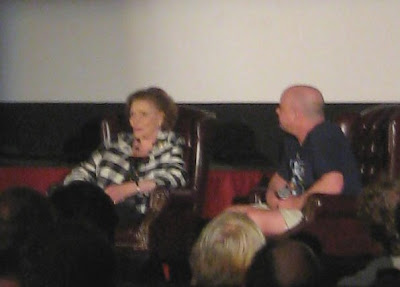 She was asked if people on the set were aware of the Christian allegory present in the story of TDTESS. (A godlike man comes from the heavens to offer a chance at peace for Earth, is killed, and later revives to warn humankind to change its ways.) Ms. Neal said they were, but added, "I was just having fun; I didn't take it seriously. But I was wrong-- it's very good." She said that, for her, playing some of the scenes with Gort were "hysterical" at the time. She recalled the actor in the Gort suit, Lock Martin, as being tall and thin and frail, and had to be "held up" when he had to "hold me up." ( The IMDB reports that Ms. Neal was supported by wires when Gort picked her up.)

She recalled her days as a Tinsel Town star with affection and pride. She said "Hollywood was fantastic, you know," and said in those days she would wear a suit and gloves-- "I was gorgeous."

Ms. Neal recalled hating be made to take horse riding lessons for a movie, ("I did noooooooot like it!"), but that was the only complaint she mentioned. She didn't try to be independent-- regarding Hollywood's studios in their heyday, she said, "I did what they told me." She credited Olivia DeHavilland for breaking the power studios had over actors' career choices.

Her first role came at age 19, she said, as an understudy (later replacement) to Vivian Vance in the play Voice of the Turtle. "I was magnificent," Ms. Neal said, "and they adored me." Later, she told how she won the first "Best Supporting Actress" Tony Award for her work in Another Part of the Forest.

She related a funny anecdote about her Oscar for Best Actress for the movie HUD. She said the base made noise when you shook it, like it had pebbles or something in it, and she liked making it rattle. She kept it in her living room. But, following a party she gave some time after receiving the award, she noticed it didn't rattle anymore-- some guest had apparently damaged it and the 'ballast' had run out. As Ms. Neal described it, some "bastards" had poked a hole in the bottom!

Her thoughts on other actors she worked with:

Ms. Neal didn’t like John Wayne at all the first time she worked with him, and implied he was a bit of a rake. The Duke was single when she first met him, but said that by the time he and she worked together in IN HARM'S WAY, he was married and more mellow-- but the marriages didn’t keep him happy. IN HARM'S WAY co- star Kirk Douglas was a “beautiful man”.

Ronald Reagan, who lived next door, "always talked politics", but she once saw him "crying on the shoulder of an old woman" at a party, because he was going through a divorce from Jane Wyman. "He did not want to divorce Jane."

She said her favorite actor was Gary Cooper, and she loved him. (Lots of oohs and aahs came from the crowd, who obviously knew of their affair). Ultimately, "Coop" would not divorce his wife, and she later married author Roald Dahl. The man she named as her favorite director was one not widely known today: Ulu Grosbard, her director for the film THE SUBJECT WAS ROSES. (Ms. Neal was nominated for an Oscar for performance.)

Andy Griffith, her co-star in A FACE IN THE CROWD, she recalled as a good friend. She said, in her lovely Southern-inflected accent, that she loved "Aaaaandy", and said when she won an Oscar for HUD, that she was not at the ceremony because she was pregnant, and didn't expect to win anyway. But Griffith called her at home after the ceremony and told her, "You won, Patsy!"

She mentioned that Dahl once wrote a script (never produced) based on an idea by then-TV director Robert Altman titled something like "O Death, Where is Thy Sting-a-ling-a-ling?"

When the organizers of the event mentioned that THE DAY THE EARTH STOOD STILL was being remade, she asked, "They're really gonna do that?" 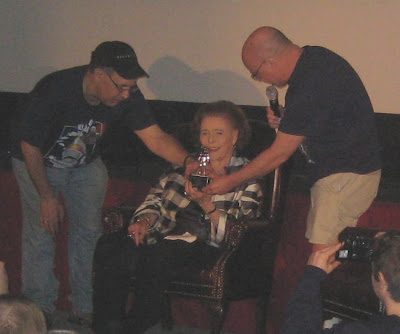 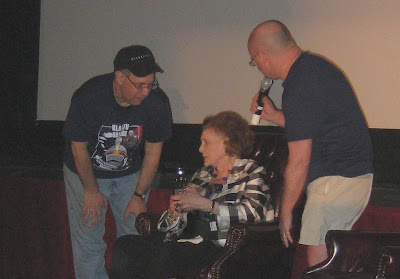 She was given an award shaped like Gort the robot by the event organizers, and seemed delighted by it. She closed her appearance by exclaiming, "Klaatu barada nikto!"

Much of the audience of around 250 responded with a standing ovation, rising suddenly and simultaneously. Sadly, I can only say "much of the crowd," because she was dissed by a large chunk of the crowd, who remained in their seats! (Approximately a little more than a third of the audience of around 250.) Although she'd had good, warm reactions to her anecdotes and many people asked her questions, getting up off one's butt was apparently too much to ask for some folks. (Guess they react to everything as if it's on tv.) If ever some theater seats needed to be wired with the "Tingler gimmick", it was at this event! I was mortified.

(I'm sure Ohio Sci-Fi Marathon forum members "Hypno-Toad" and "Josh Roxx" were sitting on their hands, as indicated by this thread.)

But I was charmed by Patricia Neal, and will never forget her smile, or her cheerful good humor and determination in the face of illness. Bravo!

(As far as those disrespectful louts, this Buckeye apologizes.)

Just in a quick response to Craig, it sounds like she was kidding when she proclaimed her greatness in her roles. However, even if she wasn't, at her age she deserves to have a bit of an ego.

I read an inverview with her somewhere where she said that her line, "Gort, Klaatu barada nikto." was at the time the silliest thing she'd ever heard and had a hard time saying it without laughing. I guess she's come to terms with it by now.

She says it on my computer everytime I get an e-mail. Still sounds great.

Craig and Jim-- thanks for your comments. I really love reading anything you two have to say.

As to Ms. Neal's comments, I'm sure she was HALF-kidding. As is proper. She was a beauty and talented-- so why not say so?