The Patchwork Blog of Fournier 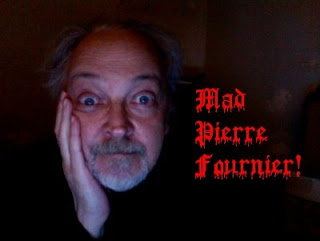 (Or, The Modern Diary of Frankenstein.)

Today is the first anniversary of the day that the blogsite Frankensteinia came to life.

Its first year of life has been a remarkable one. Embraced by scholars, artists, writers and ordinary fans of all things Frankenstein related, the number of daily visits, along with the scope of its reputation, have grown amazingly in one short 365 day span. For a blog that is not "sexy" in the popular contemporary sense (despite featuring a beautiful topless Bride of Frankenstein in a recent post), this is incredible.

Exploring historical and literary aspects of the Shelley novel, examining its stage, radio, comic and film adaptations and continuations, and discussing the impact the novel has had on art, political and social discourse, Pierre Fournier's internet journal and picture book has become a recommended source for research. And it, unlike many sources for research, remains fun. (Hey, that sounds like something the Monster might say: "Remains...fun.") Frankensteinia is intelligent and even at times academic, but it is never fussy or musty.

Nor is his blog solipsistic or indulgent; Fournier stays behind his interest in all things Frankenstein. His intelligence, sense of delight, and even his sense of humor serve, rather than distract, the reader interested in Victor Frankenstein and his distorted doppelganger. Anyone interested in the iconic artificial man described first by young Mary Shelley (and by countless others since), has no better guide to introduce him than Pierre Fournier.

Fournier's ability to find Frankenstein or its spirit in all manner of places, times, and topics, and to do so eight to ten times a month or more, is impressive. How does he do it? As illustrated by the picture above, he obviously gets no sleep. ; ) I think he himself must be artificially created-- he's no ordinary mortal.

Today I post only on Frankensteinia. Do yourself a favor and explore this virtual world of marvels, monsters, and ideas that will stimulate your brain, whether it is in your skull or sitting in a jar!

Congratulations, Pierre-- Mary would be proud. Your site does her honor.
Posted by Max the drunken severed head at 2:46:00 AM

Thanks very much, Max. Through your blog and your activities, you are truly The Official Monster Kid Ambassador. A year ago, you were my first supporter. You gave Frankensteinia its first review and its first link. You reached out to me, you gave advice, shared contacts, introduced me around.

I am supercharged by your enthusiasm and your support, and I cherish your friendship.