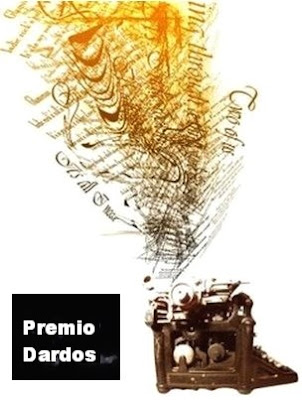 Iloz Zoc of Zombos' Closet of Horror recently bestowed upon this blog the Premio Dardos, (Darts Prize) for perceived excellence here. I am grateful for the honor, even if it does make me wonder if the ol' Zocker is off his rocker! (Or his meds.) Anyway, those so honored with the "peer accolade" (as Iloz describes it) are asked to, in turn, name five other blogs that the honoree believes deserve public plaudits and pats on the back. (It's a virtual chain letter! It's a major award! It's BOTH! It's two, two, two things in one!)

Okay, so here are some blogsites that I think should have gotten the Premio Dardo by now (Or maybe they have, but didn't report it.) In no particular order:

Sketchy Things The blog of one the nation's best caricature artists, Frank Dietz. (I was a mall caricature artist at one time, and Dietz's talent is inspirational. His original style makes a hack like Mad's bland Tom Richmond look like the Mort Drucker wannabe that he is.)

Dinosaur Casserole This whimsical, nonsensical blog never fails to amuse me. It's funny, and it displays a childlike imagination. It cheers me every time I read it.

The Cobwebbed Room THE blog of "monsters and horror in British popular culture. Always fun.

Taking IN the Trash Just for getting its readers into the head of a neopunk, exploitation-oriented garage band lead singer/songwriter.

And though I'm supposed to stop at five, as a talking severed head I never follow expectations! I also throw a dart (I mean Jart) to this blog:

Haunted Monkey Paw Island Chris Jart's excellent review blog for bad horror movies! (The dart I threw in Chris' direction could just have easily hit Jart in My Head, his funny, nostalgic blog of horror and schlock in American pop culture. 'Cept he hasn't updated it since 2007.)

Check 'em all out, if you haven't already.

UPDATE: Hello to all in the ISCA!! Thanks for all the hits! They just keep a-comin'!

Watch the blog for caricatures by Clarence Butler, Jim Batts, and Mexican film star German Robles, soon to appear at TDSH!
Posted by Max the drunken severed head at 1:21:00 PM

I'm a severed head. You throw it at me, and it'll just bounce off my dome.

But thanks for the thought!

Hugs! (I can't do those either, but it's the thought that counts.)

I feel very honoured that I am 1 of 5 blogs that you have chosen that deserves the Premio Dardos award. To be honest I never knew about this award but it would be certainly be a gratfully received honour if I was chosen [Lot of competition out though, I'm I worthy?] Anyway I will also choose 5 blogs that I think deserve the Premio Dardos, I will be choosing your wonderful entertaining and funny monsterific site which i always enjoy reading [I am not biased, honest!] Its going to be quite difficult to narrow it down to just 5, but we shall see.

Thanks again Max and keep on Blogging!