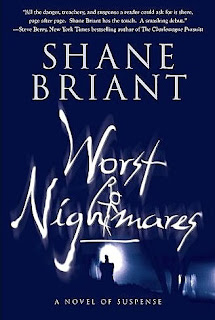 A couple of months ago Jane and I watched Frankenstein and the Monster From Hell on dvd. I couldn't have guessed then that one of the figures from that film would later frighten me so much merely with his words that I wouldn't be able to sleep! But that's exactly what happened the evening I finished the new novel Worst Nightmares, a thriller by the co-star of FATMFH, Shane Briant.

Having enjoyed Mr. Briant's work as an actor (in Hammer horror films, the tv drama The Naked Civil Servant, and Dan Curtis' The Picture of Dorian Gray), it was a surprise to learn that he's now a writer living in Australia. Worst Nightmares is his debut in America as an author, and should be the start of a very successful career in the U.S., as his new book is an intense and dread-inducing psychological thriller.

The novel is about an author named Dermot Nolan, an acclaimed author who is out to discover the truth about a manuscript, left at his home by a man calling himself Albert K. Arnold. It describes a series of murders by "the Dream Healer," who uses the internet to find victims, their deaths patterned on the personal nightmares his website's visitors describe to him. After Nolan decides to rewrite the manuscript and publish it as his own, he becomes entangled in a web of deceit and horrendous murders.

As the Worst Nightmares website puts it, "Could the Dream Healer be real? Could these innocent cyber-surfers have fallen victim to a raving maniac? And could Dermot be writing his own ticket to death . . . his very own worst nightmare?" Dermot Nolan rewrites a story not his own, but it becomes his, and he is unable to rewrite his fate.

Worst Nightmares is very engrossing and effective. The night I finished reading it, I actually stayed awake in spite of myself. The horror of the last chapters hit me so hard viscerally that I was unable to get the awfulness of it out of my mind; it had a power worthy of Edgar Allan Poe. (But don't you dare read it before you read the rest of the book; the story very carefully and intricately winds it way to the conclusion, and won't have the same power if you cheat and skip ahead.) The rest of the novel kept me racing to finish it.

The novel develops the characters of Dermot Nolan and the Dream Healer very well, and I desperately wanted to read a sequel when I finished. (And it turns out I'm going to get my wish; Mr. Briant was so intrigued by his characters that he has completed a follow-up to the novel.) The two characters are fated by events to be entwined with other in ways that reminded me of the story of Mary Shelley's Frankenstein and his creation. Nolan, like Frankenstein, is led in pursuit of the Dream Healer, who is, in some ways, Nolan's creation. (I can't spoil the mystery and reveal just how, though!) As in Shelley's novel, the two main characters are tragically flawed. Nolan, like Victor, is marked for a downfall by hubris, and the Dream Healer is twisted in his hate-filled obsession with his 'creator.' (There's even a severed head in one powerfully awful sequence! Awesome! Maybe readers can persuade Mr. Briant to create a cameo for me in the sequel.) I highly recommend that you buy this book.

It's not without flaws. In an early sequence, one victim is attacked by scorpions and tarantulas in ways that aren't truly believable, dangerous as they are. (The scene seems written with a CGI-fx sequence in a possible film version in mind.) But other images Briant creates linger in the mind.

At times Nolan does things so unwise--just like characters will do in horror movies sometimes--that you want to roll your eyes and scream at the character. A friend of mine read the novel, and responded to my trying to rationalize why Mr. Briant would have Nolan sometimes act so foolishly (when he suspects he's dealing with a real murderer) by saying, "Moral ambiguity my ass." However, the plot is so engrossing, and the characterizations of the driven Nolan and the vengeful Dream Healer (a character as clever and as memorably evil as Hannibal Lecter) are so well-developed and interesting, that a few lapses in likelihood don't matter. Also, as Mr. Briant emphasized in an interview with me to be posted here soon, he had Nolan only do things that he felt he was himself capable of doing in the same situations, and the Nolan character finds himself in some pretty extraordinary circumstances. 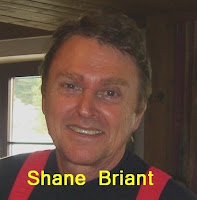 In the world Shane Briant creates in his novel the lines between dreaming and waking, between fiction and terrifying fact, become blurred. Few books or films ever unsettle me, but Worst Nightmares did, its resonant shocks a testament to the skill and imagination of Shane Briant. I wish his book much success.

Coming in Part 2: An audio interview with Shane Briant.
Posted by Max the drunken severed head at 12:29:00 AM