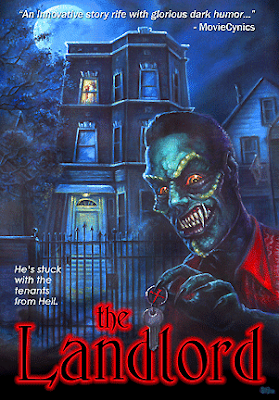 I recently got a screener of an indie horror-comedy titled The Landlord from writer/director Emil Hyde, and the Voodoo Queen and I watched it and laughed. We liked it.

But it's "low rent" alright. As described at The Landlord website, it was shot for less than what Hollywood films "spend on catering." (They seem proud of this.) The low budget shows; before I get to the good stuff, gotta say what was disappointing to me.

The film has some very rough edges. The sound quality varies a lot. (Update, March 23 2010: Much of the sound has since been relooped or otherwise tweaked, and the editing tightened.) The makeup applications look amateurish; the special makeups seem to be costume shop Woochie pre-mades, and the pancake makeup is not evenly applied. And some of the actors are adequate at best, and amateurish at worst. Specifically, the nebbishy lead character of Tyler, as played by Derek Dziak, has no charm or charisma, IMHO. Under-played by Dziak, he's not interesting, pitiful, or even annoying enough to get you rooting for his destruction. You don't care at all what happens to him. Dziak is a talented musician and vocalist for the band Mystechs, but not yet a skilled actor. (He probably didn't have to audition. His bandmate Emil Hyde is The Landlord's writer and director.)

Okay, before I say what I valued in the movie, a time-out for a synopsis. Here's a spoiler-free one from the website:

"The Landlord is the story of Tyler, the unfortunate young owner of a demon-haunted apartment building. Finding tenants has never been a problem for Tyler, though he does have trouble keeping them alive to pay rent. No matter how nicely Tyler asks the demons not to eat the renters (or to at least wait a month or two), they never listen. And why should they? As far as the demons are concerned, humans are merely dumb, tasty animals - kinda like chickens - and Tyler is their pet monkey.

"But all that might change when Tyler takes a liking to the newest tenant, a desperate young woman running from demons of her own…"

I did like the film, though, and I do recommend it. You'll laugh! It has two really fine comedic performances-- one by Rom Barkhordar, as the flesh-eating demon Rabisu, and the other by Michelle Courvais, as Tyler's sister Amy, a corrupt cop with anger issues. These two are the heart of the film's charm. Barkhordar is an actor and voice artist with professional TV and videogame credits; Courvais is an actress in Chicago. Both belong in Hollywood. (Courvais is also a very sexy and attractive woman; she has one heavy make-out scene in a cop car that made me wish the movie was an interactive video game! GrrrOOwwrr!!)
The script is funny and inventive. The laughs, such as in a scene set in a pro-life counseling clinic, are even daring and edgy. Emil Hyde creates some memorable characters with Rabisu, Amy, and Donna, a woman running from an abusive relationship, who becomes Tyler's love interest. (The demons take an interest in her as a food source.) And not only are their demons in the film, but a new kind of monster that seems to be a cross between flesh-eating zombies and fanged, daylight-shunning vampires.*

The special visual effects are fine, and there's gore for the gorehounds.

Trailers for the film can be seen here. 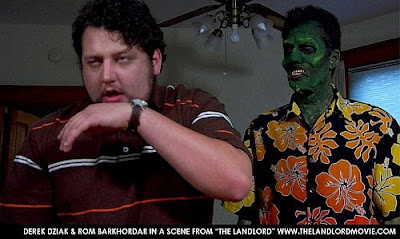 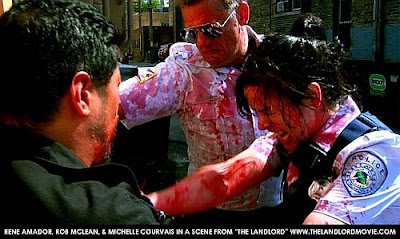 * Update: Emil Hyde writes to say about the monsters, "They're actually vampires as they were originally portrayed in Romanian folk tales, before Bram Stoker reinvented them as a dapper, upper-class gigolos. In the old stories, they weren't afraid of sunlight (though they were nocturnal and would be all sleepy and sluggish during the day), had a mouth full of rotten teeth (not just two little fangs), and would get all red and bloated when they were full of blood, like a tick. Basically, they were more symbolic of gluttony, while modern vampires are symbolic of lust."
Posted by Max the drunken severed head at 3:42:00 AM