My article on my friend, the late artist Linda Miller, comes out in SCARLET: THE FILM MAGAZINE #3 this weekend at the Monster Bash convention held in Butler, PA.

Linda's art graces the cover, too: 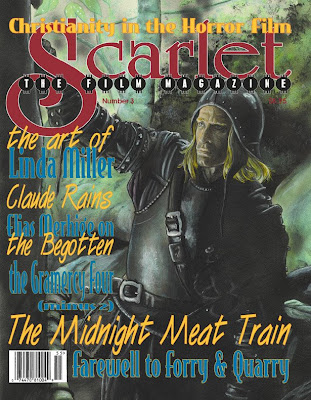 There will be a bonanza of genre mags coming out this weekend at Monster Bash. As this site notes, "A slew of some of the finest classic monster mags all have new issues coming out all at the same time. The new "Monster Bash" magazine, "Scary Monsters" magazine, "Monsters From the Vault" special Mummy edition, and "Scarlet - The Film Magazine" issue #3 will all make their debut at the Monster Bash in Butler (near Pittsburgh) this weekend."

A feast for the eyes and brain! (Not to be confused with a feast of eyes and brains, which is description of George Romero movies.)

How do you get YOUR copy of the newest ish of SCARLET? You can order individual copies directly from: scarletthefilmmag@yahoo.com for those who wish to order with PayPal. The publishers are also accepting three-issue mini-subscriptions as well. To get the subscription starting with the last issue, #2, a check may be paid for issues #2-4 for $25 (U.S., made payable out to "Scarlet The Film Magazine") and sent to Scarlet The Film Magazine, P.O. Box 2092 Cleona, PA. 17042-2092. Or wait until the next issue and subscribe for issues #3-5 for $25. In either case, it's a saving of three dollars over individually bought copies. When subscribing, note which three editions you prefer, #2-4 or #3-5. Outside of continental U.S., please add in necessary postage. Again, sample single issues of issue #2 are $8.95, but please add in proper postage.

What are you still reading here for? Go get SCARLET--you'll be glad you did!
Posted by Max the drunken severed head at 12:57:00 AM

Can I pick one up at my local comics shop?

It's too bad Linda can't see this herself.