Countdown Day 1: "The Birth of the Boos": Ray Bradbury on Halloween 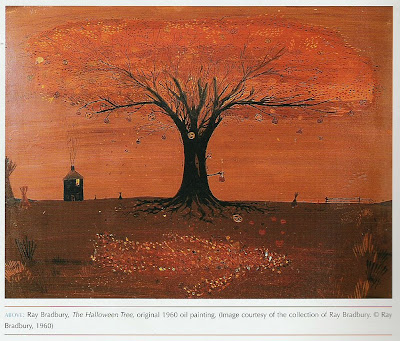 Above: "The Halloween Tree"--A 1960 painting by Ray Bradbury.

Name the greatest holiday of each and every year. Fourth of July? No. Christmas? Chanukah? Forget it. Easter? No way. Better than all these, let's hear it for . . . Halloween!

Before you explode, let me speak my piece. We live with two mysteries: life itself, and death. And we have yet to solve the two. Meanwhile we exist in puzzlement, unable to explain our yearning for All Hallows Eve.

You might well say that All Hallows Eve is a fast read of our future nonexistence----tasting darkness, but thrilled by the encounter because we are alive to savor it. It is somewhat similar to leaving the dentist's after a tooth pull and being unable to keep our tongue out of the deep pit from which it vanished. We taste blood, and a small bit of our mortality.

All the more fascinating when you consider the Gothic holiday grows louder, bigger and more profitable each year. More shops decorate in orange and black long before summer's end. More pumpkins are cut, and more costumed parties mob forth without anyone guessing what in blazes the madness is all about.

Run back with me to the day after Halloween, 1966. While sharing drinks with Chuck Jones, creator of the Road Runner and Wile E. Coyote, he describes an amazing encounter from the night before. "Some kids rang my bell," Chuck said, "and when I opened the door they cried, 'Trick or Treat!' I yelled back, 'Trick!' which stunned and surprised them. So one little boy ran out on the lawn and stood on his head! In the old days, if I hadn't handed out treats, they would've soaped my windows or firecrackered my mailbox. I stared at all these kids, dressed up as witches, mummies, and ghosts, and asked them why they dress that way. No one knew! They had no roots in the past!"

I countered with my own tale. "Every Halloween for years," I said, "I go to visit my father's grave. Friends protest, 'Don't you have any respect for the dead?' To which I reply, 'That's what
Halloween is, but we have forgotten."

"Shucks, said Chuck, "why don't we make a cartoon to teach people why they wear bones and sneeze mummy dust."

We did. I wrote the novella "The Halloween Tree," which Hanna-
Barbera has now produced as a 90-minute animated film. You may see it for the first time this season.

Along the way, I was reminded that although we celebrate it, we do not know Halloween well. We had forgotten the history of trick-or-treat, which began with the Greeks and Romans, who put food on their porches at twilight to keep ghostly visitors well-fed so they would
not come indoors.

We had forgotten that there were witches. What did they do? They were wise, is all. The word "witch" simply means wits, or wisdom.

Some wise men and women, of course, let others imagine they could conjure ghosts, revive dead cats, and dance with treetop bats.

Our holiday is an amalgam of celebrations from a dozen countries and customs, plus what we have learned from movies and TV. In 1939, one theater ran "Dracula" and "Frankenstein" all day and all night for a year. Lines circled around the block at 3 in the morning, breakfast and high noon.

But it was 1963 before the finest goose-pimpler appreared: Robert Wise's "The Haunting", in which nothing happens but everything does. A chilling exercise in light, shadow, and music with no blood, skeletons, or plastic guts; it is probably the most terrifying film of the century. Terror, thy name is subtlety.

Among other fine All Hallows films that I would suggest you rent this season: "The Cat People," "The Leopard Man", "Isle of the Dead", and "The Body Snatcher". Do these titles sound cheap and sensational? Believe me, they are black-cat shadows, buried whispers, and things unseen behind doors---no bludgeons, razors, or battle-axed hearts. "The Mummy", starring Boris Karloff--which you must rent--is fine because you only see a single strand of his unraveled tomb-wrapping trailing in the dust. It is a love story that will exist long after we have settled on the moon and gone to Mars.

In 1680 in Salisbury, Mass., my ancestor, Mary Bradbury, was tried as a witch. She was accused of appearing by night as a wild boar, spitting blue flames, and wrecking ships at sea. She hid out
with friends until the Trials ceased. This, then, has been written by her nine-times-great-grandson in the fine autumn of a better year. 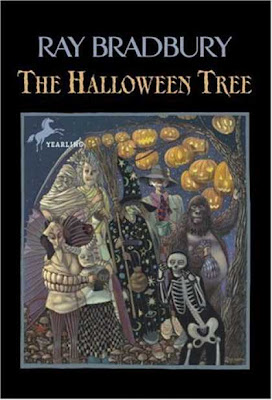 Ray Bradbury's classic story The Halloween Tree, excellently dramatized by the Colonial Radio Theater, can be purchased for download at Audible here.

Learn how to make your own quick Halloween Tree at this DIY blog.
Posted by Max the drunken severed head at 3:19:00 AM

Nice start, Max. The season would not be complete without Ray Bradbury. I'm glad Linda took the trouble to transcribe that article, since my copy of that issue of TV GUIDE has gone missing some time ago.

I'm looking forward to all your posts this month Max, though you seem to be jumping the gun, or using a time machine to race to the end. This post is dated Saturday October 31st. No cheating!

Thank you for commenting, John. Now run along home. Yer momma wants ya.

Thanks for posting that. The thing I love about this holiday is that it's both rooted in the traditions of the past and still evolves even to this day. It's important to think about the roots, and it makes for a nice start to the season.

Please visit http://apatchworkofflesh.blogspot.com/ today for some spectacular Frankenstein art that I'm sure you won't want to miss.

Thanks, Shawn! Bradbury is the first author I read on my own who wrote for adults.

BTW, I love your blog.

Coop--Thanks for the notice. Fantastic stuff on display--some incredible art.

Wonderful post. Obviously I love Ray Bradbury and the Halloween Tree, as I named my blog by the same name. Looking forward to the rest of the month. Happy 1st Day of October! :o)

This is bittersweet for me.

It reminds me how much I love this time of year and how sad I am that all my Halloween stuff is up in Chicago. Where it's actually fall and not summer. Where my entire neighborhood goes nuts for Halloween, including the high school/college aged brothers who put together a "haunted backyard" for the littler kids every year.

And my fire pit, which had my neighbors and my family gathered around it last year for hot dogs and marshmallows and Zombies.

And I'm in stupid stinky Texas with none of it, and I am sad. SAD.

Thanks for listening. Sniff.

Wendy--Thank you. I love your blog.

Ubermilf--Sorry you can't be sharing this chilly gray day in Pittsburgh with Jane and I!

But I'm sure it's really autumn in your heart. (You know, the one you keep in a jar in your desk.)

It really isn't Halloween without a little Bradbury, and I'm especially happy you posted that painting; lovely stuff, the distilled essence of the holiday.