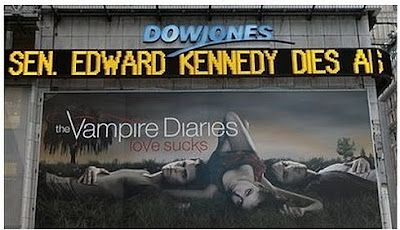 I meant to post this Associated Press photo taken after Sen. Ted Kennedy, "the Lion of the Senate," passed away. The photographer who took it might have thought there was unintentional political commentary in the accidental juxtaposition of images, but that's not why I post it.

As with the recently deceased Walter Cronkite, Ted Kennedy had always been around during my life. I grew up with both men playing a part of the national cultural consciousness, and when each died, something in my life passed on with them. Both were men that everyone knew was concerned with what was best for the country.

Given my interest in both politics and horror, the picture above just made me smile on a day when I didn't feel like it.
Posted by Max the drunken severed head at 2:39:00 AM