When I was a kid, I'd read all the horror comics I could get my hands on, and in October I'd step up my efforts, rereading all I had and waiting for the Halloween special issues of comics and magazines. One of my favorites was this one, a special oversized issue of THE HOUSE OF MYSTERY.

Its pleasures seem tame today, but the kid in me still likes it. Now I have found another favorite for the adult me, a graphic novel strong enough to scare me now. It's called NORTH 40, and it's one I'm sure I'll re-read each October. 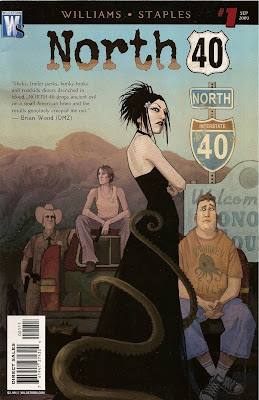 NORTH 40 is a six-part graphic novel series from WildStorm (a division of DC Comics) that I can enthusiastically recommend for Halloween reading. (Disclosure: I was sent the first three issues gratis, though I accepted them without a promise of a review.) The first three issues evoked the same feelings of surprise and unease that my favorite horror stories did for me in years past. Not an easy feat when you have the very limited amount of text of a graphic novel. (The fourth installment is now out, the last parts come in November and December.)

Visual delineation of sights of awesome horror is difficult; what can compare to the visceral power of your own imagination? But writer Aaron Williams and artist Fiona Staples have created a graphic novel that packs a lot of imaginative wallops to one's sense of what horror comics are about. Though NORTH 40 openly uses H. P. Lovecraft's mythos of hidden "Elder Gods," dark demi-deities that bring madness and mutation when encountered, the homage to the Providence master of horror is done very well and provides a fresh new context for his kind of dark cosmic horrors.

NORTH 40 takes place in one Conover County, a southern midwest setting, where two teenagers read aloud from a book that should never be read from. This act turns Conover County, "a place of farms, simple folk, and small-town dreams" into "a den of monsters and nightmare," according to the official NORTH 40 webpage. The page further describes the graphic novel as "the story of those who survived and came to confront an even greater evil on the horizon – one that wouldn't just consume their flesh, but their souls as well. Heroes arise with power to bring against the dark: Wyatt, an unwilling protector of his former tormentors; Amanda, an apprentice to forgotten arts; and Sheriff Morgan, whose bonds with Conover County go back farther than even he can remember." 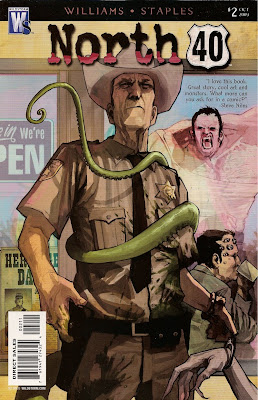 There are several self-absorbed supernaturally-powered young characters in North 40, and people with dark secrets. These motifs reminded me of elements in Jerome Bixby's "It's a Good Life," with its all-powerful and selfish child Anthony, and the HBO series Carnivale, with its large cast of characters with surprising powers and hidden sins. Not that the well-plotted storyline seems derivative--it doesn't. And most of the characters are ones who can empathized with as ordinary people facing extraordinary circumstances.

Not to say it isn't without a few minor flaws. Some of the changes in setting are so abrupt that, upon first reading, it's hard to figure out who's who and what's what in a few places. (A case of trying to be too much like the movies, I suppose.) For example, whether the diner in the story is the "Li'l Dixie" or not I stopped trying to figure out. But it's a minor quibble--you're likely going to want to re-read these comics anyway. I did, gleefully. The more I read, the more caught up I got.

A couple more minor, nit-picky things: Some of the characters of North 40 speak in a twangy dialect of the southwest, mid-South, and lower midwest regions of the country, and having spent all my life in those areas I thought a few brief sections of the dialogue were unconvincing. And all the characters react to the horrifying changes they see in each other very calmly, sometimes too calmly to be fully believeable. But this does give the events a nightmare-like quality, and madness does touch many of the characters. Also, the depiction of the awakened Cthulhu-like god is traditionally cephalopodian, so that will disappoint some readers looking for new vision of Lovecraft's monsters, I suppose. (Didn't bother me.) However, the story, characters, and the evocative art waaaaay more than makeup for these few quibbles. This is one of the best graphic novels of the year. 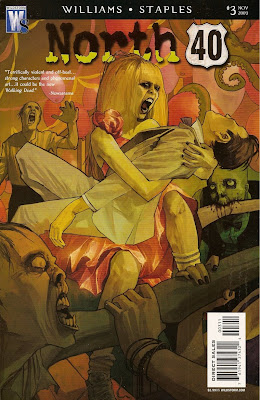 Some of the plot points and images are very unsettling. Among them: the way some crows fatally encounter an invisible barrier at the edge of Conover County, and the revelation of one character's "new eyes." The opening page of issue 2 has an image that was horrifying and unsettling to me, and brilliantly expresses the disturbing, sometimes awful changes in identity the residents of Conover county are made to undergo.

NORTH 40 is one of the best comics for Halloween pleasure that I've read since I was a kid and read this comic book:

Visit comicshoplocator.com or call 1-888-COMIC-BOOK to find out where you can buy a copies of NORTH 40.

Coming Monday: The Halloween memories of Aaron Williams!
Posted by Max the drunken severed head at 12:07:00 AM

Maxie, give yourself a Treat -

Hi. Interesting post. I was just thinking what costume to make for Halloween. I prefer those which are self-made but it is very hard to be original. And I absolutely forgot that horror comics might be full of ideas. NORTH 40 seems also fine.
Thanks for inspiration.

Hope you are having a great Halloween season.