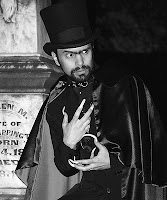 Raymond Castile, a journalist in Missouri, has quite a list of Monster Kid bona fides. He is the creator of the website The Gallery of Monster Toys, a moderator at the Universal Monster Army message boards, the only other actor besides Jose Mojica Marins to play the Brazilian cult horror character "Coffin Joe," and the 2007 Rondo Award honoree as "Monster Kid of the Year".

Max: I'll start with Halloween treats. What were your most and least favorite candies to get trick-or-treating?

My favorites were Snickers and Peanut Butter Cups, and least favorite was toffee wrapped in black and orange paper.

What were some of the costumes you remember wearing as a kid?

I dressed up in various Ben Cooper costumes when I was younger, then more homemade stuff when I was older. Over the years, I dressed as Frankenstein, mummies, ape men. I don't know where the childhood photos are now, but in a couple childhood pictures of me on Halloween, I think I'm dressed as a skeleton in one and maybe Batman or Spider-Man in the other. When Imagineering came out with "The Face" makeup kits, I started using those to the exclusion of other masks. I loved painting and gluing on my own foam appliances.

What decorations and Halloween "gear" do you recall?

I remember paper decorations hanging on doors and windows. I especially liked the ones with fuzzy surfaces. I remember lots of honeycomb and accordion crepe tissue witches and scarecrows.

Did you trick or treat on your own or with others? Did you play tricks on anyone?

I went trick or treating with my dad and brother, sometimes with neighbor kids. But no, never played a trick.

Describe this year's Bash for me--how was it decorated?

The decorations are not really important where this party is concerned. But I had some impressive stuff on display, such as a giant devil and a giant spider, both very scary. When the kids walked in the door, the giant spider was the first thing they saw. It got some enthusiastic comments. But the activities are the main attraction at this party. The kids could play a bunch of games, eat cookies and cupcakes, romp around, get their faces painted and show off their costumes. We had cake walks every 10 minutes and two costume contests, and a magic show. We gave away tons of candy and prizes. For music, we're still using the old spooky songs you sent me a few years ago, interspersed with modern songs.

Any severed heads there?

You sent me pictures of a charitable Halloween event from last year. In one photo, you appear to have some spooky groupies. Who are those bewitching ladies with you? 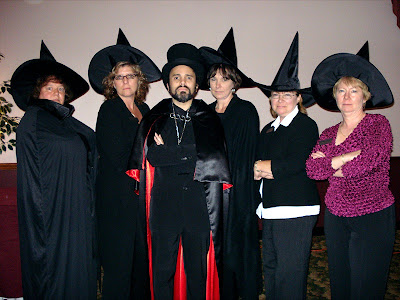 The ladies are members of the Community Council of St. Charles County. The event was called "Fright for Food". I hosted it, told ghost stories, showed a Powerpoint about the paranormal, all in my costume. Admission was a can of food. We donated the food to a local pantry. 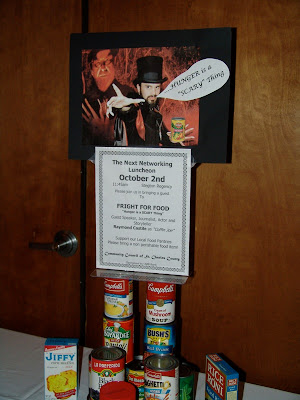 You're a monster mensch, Raymond! Do you celebrate at work in any way? I dressed up as a robot recently at the supermarket where I work, and was given the task of giving treats to the kids in the store.

I have some Halloween garland that hangs around my cubicle all year round, along with a big El Santo blow molded action figure, a rubber Boglin tied to my telephone, the rubber Mothra you gave me last time I was in Pittsburgh, and a stuffed Mr. Mucus toy. The most prominent toy on my desk is an 18" talking Mini-Me doll wearing an anti-smoking T-shirt and Mardi Gras beads. I need Mini-Me to assist me in carrying out evil deeds.

In my desk drawers, I have "emergency monster toys," including the recent Cast Away Mego-style figures of the Devil, Witch, Grim Reaper and Ghost. I keep them in the desk, within easy reach, just in case they ever become necessary. You never know when you might need an emergency monster toy. 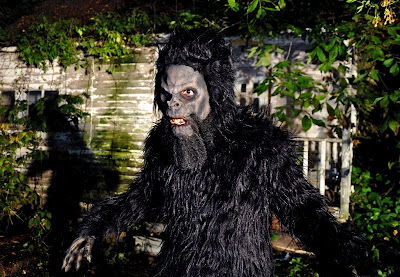 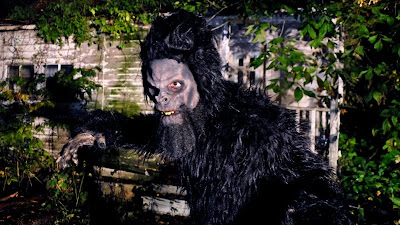