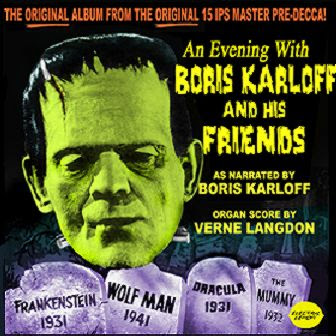 BORIS KARLOFF AND HIS FRIENDS is a legendary LP from the late Sixties. On it, Monster Kids from that era were treated to an audio trip thru Hollywood horror history with Boris Karloff as the host. It was conceived and co-produced by musician, makeup artist and mask-maker Verne Langdon, who also created the classic albums The Phantom Of The Organ and Vampyre at the Harpsichord. It featured a script by everyone's "Uncle Forry," Forrest Ackerman, the editor of Famous Monsters of Filmland magazine.

There has never been a tape or CD release of the record since that time.

This CLASSIC RECORDING from Electric Lemon Record C0. has been DIGITALLY RE-MASTERED as a CD from NEWLY-DISCOVERED ORIGINAL 15 IPS TAPE MASTERS! This never-before-heard Monster Mania Master has never sounded so good.

A hallmark of horror for your sense of hearing, it takes you back to that Golden Age in "Horrorwood, Karloffornia", when all those Universal-ly loved monsters were up to no good on the silver screen. Besides King Karloff, you'll also hear Boris's friends in frightdom, such as Bela Lugosi, in clips from the milestones of monster movies.

Boris' magnificently malevolent voice is elegantly backed by the musical grandeur of the massive, 34-ranks-of-pipes WURLITZER THEATRE ORGAN, with a score specially composed by Verne Langdon for the album.

The ORIGINAL AN EVENING WITH BORIS KARLOFF AND HIS FRIENDS is where the celebrated collector's album all began, and the CD's booklet includes Verne Langdon's personal account of the afternoon spent with Mr. Karloff. ALSO included are photos taken at the session from Verne Langdon's own personal photo collection. Never before seen pics of the King of Horror? I SO have to buy one of these! This really is one of my favorite records, and I highly recommend it!

A snack to enjoy while you listen

I love this CD! Listening to it is like having Karloff over for drinks and getting to hear all of these great stories. I put it on my ipod and now I can listen to him every night before I go to sleep. Great nightmares!

Those cupcakes are a riot, Ubermilf. I MUST make them sometime!

Jen--I agree about the Karloff CD. A "must-have" for every Monster Kid.