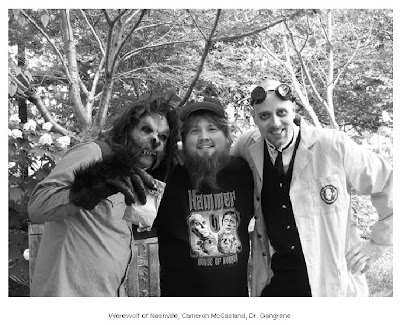 "Werewolf Of Nashville", an entry in the Go Green With Dr. Gangrene series of public service announcements, has been nominated for an Emmy by the National Academy of Television Arts & Sciences, at the 24th Annual Midsouth Emmy Awards.

Writer & director Cameron McCasland was nominated in the “Short Form Writer” category announced last Friday night at a reception at BMI headquarters on Music Row in Nashville, TN. This is the second Emmy nomination for McCasland, who was also nominated for writing last year for work on the Go Green With Dr. Gangrene campaign.

"Werewolf Of Nashville" finds middle Tennessee’s long running horror host Dr. Gangrene (Larry Underwood ) taking his pet werewolf out for a walk in the park. The mad doctor reminds people to pick up after their pets, with the tag-line “It’s not what you don’t do, it’s what you do-do.” The Go Green with Dr. Gangrene series is a continuing collaboration between Underwood and McCasland and provides ways to make a safer, cleaner planet while using a horror theme as their backdrop.

For more information on the “Go Green With Dr. Gangrene” campaign please visit drgangrene.com
Posted by Max the drunken severed head at 1:03:00 AM