When Boris came back

For my first contribution to the Boris Karloff Blogathon, I took an actual incident that happened to me and explained it in the form of a poem. 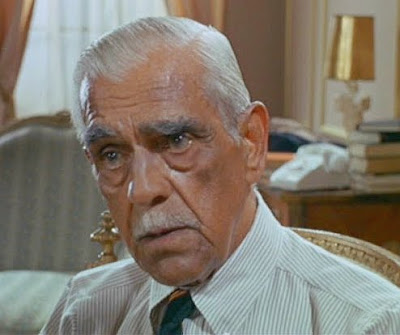 The Day Boris Karloff Came Back From the Dead, Just for Me

Boris died in February '69, and I didn't know
Until later. He went away for good, I was told--
This news was very bad, bad, NO!--I was 7 years old and I'd
Been orphaned in the year before. I cried.

Back then, adult friends of one's family were "aunt" this and "uncle" that,
Though they had no blood of your family in their veins.
Bloody Boris was cool uncle everything--
Monster, crazy doctor, weird killer--but always fooling--
And monster-crazy kids knew it. His smile was the real part of his made-up face
At least it was when his big crater eyes were crinkly closed
In news photos where he was with children, or heavy half shut like
When he was a Monster who wanted a friend.

I moved into a new town in 1990, when I was a man.
With no friends to divert me, I went to a K-mart--and I was
Surprised to see boxes of 8mm movie clips still for sale,
Packaged scary movie pieces all together on one large frame.
This was a dead form, but here it had
Commerce pumping cash blood into it.
I never saw the sight again.

I went further in exploring and in the back up against the wall
Televisions were showing news, I paid no mind--
Turned my eye to something else, when at last,
Then, came the moment of zen, the grace, the high--
I looked again--saw the familiar face of Boris! Close,
Very old, but looking new.
Every television had Boris, talking, his face all vivid color--
For one lone, lonely, lovely moment he had slipped back!
I was so surprised I almost learned how to believe.
How could this be?
He could not be.

As fast as I wondered, the sweet shock was over. I knew.
It was Boris in his nearly last movie,
Targets. A wall of Targets.
Of course. I had seen some still from it before, and now my re-cognition
Took that split-second feeling of return
Away.

But this time I did not have tears.
Because my imperfect brain,
My brain that craved shocking stories--
Had been fooling,
Giving me a moment as good, good, YES! as any bad news.
Posted by Max the drunken severed head at 3:32:00 AM

Max! I'm ALIVE. Thanks for caring, you drunken severed head, you!